Brothel Worker Rides to the Rescue of Complete Stranger 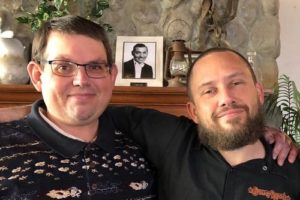 Brother, can you spare a…kidney?

If you believe the misinformation, bordering on libel, and never-ending stigmatization put out by self-righteous moralists against Nevada’s legal brothels, you’d think brothel workers are pretty much the spawn of Satan; low-life degenerates deserving of nothing but public scorn and contempt.

I worked extensively with Phil during late Assemblyman Hof’s campaign for the Nevada Legislature last year – and a more amiable, down-to-earth guy you just won’t find.

Yet he was a fierce defender of the legal brothel industry last fall when an unscrupulous Reno lawyer conspired with a disgraced former sheriff to pass a ballot question that would have shut down his place of employment and put him out of work.

Fortunately, the voters of Lyon County crushed the initiative in November, 80-20 percent. But back to our story…

Like everyone else working in Nevada’s legal brothels, Phil’s a real person with a real life totally unconnected to his job.

To start with, he’s married, has 5 kids and is very active in the community. In fact, Phil is the founder of an organization called The Dayton Pigs – a group of citizen-volunteers who go out on weekends cleaning up trash dumped illegally in the desert.

“Couches, mattresses, televisions, tires and household garbage are the most frequently cleaned up items,” the Reno Gazette-Journal reported last summer. “But the group has also found a pile of Smith’s grocery carts with all the metal removed, as well three dead goats – one cut up and placed in a plastic bag.”

But that’s nothing. Get this: Phil’s now preparing to undergo potentially life-threatening surgery to remove one of his kidneys.

No, there’s nothing wrong with it whatsoever. In fact, just the opposite. It may prove to be PERFECT. Here’s the 411…

You see, there’s this guy in Dayton named David Mickelsen. And late last year, according to a story this week in the Nevada Appeal, David sent Phil a request through Facebook to join The Dayton Pigs – a request Phil says saved Phil’s life.

“61 days ago,” Phil wrote this week, “I smoked my very last cigarette. I couldn’t have done it without his (David’s) help. Every time I feel the urge to light one up, all I have to do is think about him…because if I smoke that cigarette, it will kill him.”

OK, as Paul Harvey used to say, now the rest of the story…