The winner of our presidential elections is determined by how many states you win, not how many votes you get.  This has driven the Hillary sour grapes crowd nuts, since Hillary got more votes in 2016 but didn’t win enough states.

As such, many on the left are calling for the end of the Electoral College and switch our presidential elections to a national popular vote.

The Electoral College system confuses a lot of people, but here’s a simple way to explain it…

In the 2019 National League Divisional Series between the Washington Nationals and the Los Angeles Dodgers, the Dodgers scored a total of 22 runs over the five games played.  The Nationals scored 21 runs – one less overall.

Under a popular vote-like system, the Dodgers would have won the series.  But that’s not how it works.  You see, despite scoring fewer runs overall, the Nationals won three of the five games – and thus the series.

If Dodgers fans were like Hillary supporters, they’d now be demanding that the Nationals be impeached and stripped of their World Championship.

At the end of September there were 69,979 more active registered Democrats in Nevada than Republicans.

One month later there were 75,596 more active registered D’s than R’s.

And yet Nevada GOP shadow-Chairman Mike Slanker and his “Never Trumper” toadies – who led Sen. Dean Heller’s re-election campaign right into a ditch last year, taking multiple other GOP candidates into defeat with him – continue telling us about the great “ground game” and “political machine” they’ve put together for 2020.

This is like putting Dr. Hannibal Lecter in charge of your liver transplant.

Slanker and his fumbling, bumbling staffers running the show for the party – Keith Schipper, Jeremy Hughes and Will Sexauer – could screw up a two-car funeral.

Despite the obvious evidence of the ongoing fuster-cluck that’s going to cost Republicans even more losses in 2020, these guys are standing in the middle of the gathering political disaster blubbering, “Nothing to see here; move along.”

The infamous “Access Hollywood” tape was released in a last-ditch effort to derail Donald Trump’s glorious and historic ride to the White House.

Remember how “Never Trumper” Mitt Romney then sashayed into Nevada and led a rally announcing he, along with a number of elected Nevada Republicans, were withdrawing their support for Trump – a decision that infuriated the GOP base? 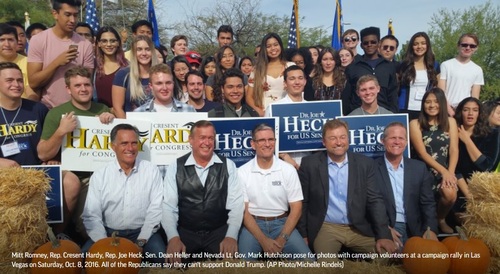 Of course, Heck and Hardy lost.  As did Heller last year when he was next on the ballot.  Brilliant “strategery” that.

Now, notice who wasn’t on the list of Never Trump wobbling Weebles…

Indeed, Amodei not only didn’t “go wobbly” when the going got tough, he continued serving as the president’s Campaign Chairman in Nevada despite tremendous pressure to “follow the crowd” and toss Trump under the bus like they did.

Yet the folks running the Trump campaign in Nevada – including the aforementioned consulting geniuses Slanker, Schipper and Hughes (see item above), who were employed at the time of the Romney rally by Heller and Sandoval – decided to throw Amodei under the bus.

Didn’t even include him as a co-chairman.

Didn’t even extend him the courtesy of a phone call to advise of the decision.

Making matters worse, of the three co-chairs named by the campaign for Nevada in 2020, NOT ONE is from Clark County – you know, where almost 3/4 of the state’s population lives.

The truth is, Donald Trump should win Nevada next year.  If he doesn’t, you’ll know who to blame.  The Three Stooges of Nevada GOP politics: Slanker, Schipper & Hughes.

“Of course Heck can win this race and he’s going to win this race.” – FORMER Sen. Dean Heller, Associated Press, 10/8/16