EPA’s Gina McCarthy should be fired for Western waterway mess 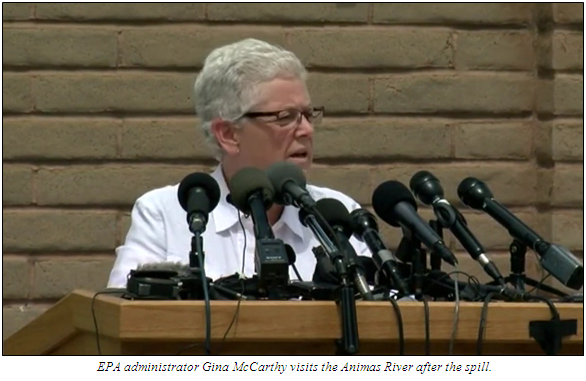 (Rick Manning, NetRightDaily.com) – Environmental Protection Agency (EPA) Administrator Gina McCarthy’s career of administrative neglect, malfeasance and outright incompetence has been capped by her Agency unleashing one of the worst environmental disasters of the 21st century. EPA clean-up crews breached a waste storage dam that produced a torrent of heavy metal-laden toxic waste, potentially fouling an entire western river system and impacting the drinking water of tens of millions of people.

While McCarthy didn’t personally bulldoze the dam herself, it is no surprise to those who have followed her Peter Principle-driven career that this would occur on her watch.

During the Fukushima nuclear meltdown in Japan, toxic radioactive clouds headed across the Pacific Ocean toward the United States. Fortunately, the U.S. has an extensive air radiation reporting network in place. Unfortunately, the EPA Inspector General (IG) reported that twenty percent of the Agency’s stationary radiation monitors were out of service at the time they were needed most.

In a report titled, “Weaknesses in EPA’s Management of the Radiation Network System Demand Attention,” the IG worried that the system is “vulnerable” writing, “Because EPA managed RadNet with lower than required priority, parts shortages and insufficient contract oversight contributed to extensive delays in fixing broken monitors. In addition, broken RadNet monitors and relaxed quality controls contributed to the filters not being changed timely. Out-of-service monitors and unchanged filters may reduce the quality and availability of critical data needed to assess radioactive threats to public health and the environment.”

Who was in charge of the RadNet system? You guessed it, Gina McCarthy.

And then there is the Energy Star program that McCarthy oversaw at the EPA. Energy Star is designed to provide consumers with a means of assessing the energy efficiency of various appliances which they purchase. Yet, under McCarthy’s leadership, the program failed in its basic mission by allowing a broad range of products to receive the energy efficiency seal, not just the most efficient.

Here is what the IG wrote in their report, “We found that the design and execution of the Energy Star program ensured neither the integrity of the label nor the achievement of greenhouse gas emission savings.”

Of course, McCarthy was also the supervisor of John Beale who got 32 months in prison for defrauding the federal government by collecting a paycheck from the EPA while claiming that he was working as a spy for the CIA. Incredibly, Beale, the highest paid employee at the EPA, was a no-show for one stretch that totaled eighteen months. That’s right, eagle-eye Gina did not notice that her highest-paid employee wasn’t around for a year and a half.

To quote the Washington Post, “Indeed, the agency was so lax in its oversight that Beale ostensibly retired in September 2011 — complete with a farewell dinner cruise on the Potomac — only to continue pulling a paycheck for another 19 months.”

Eventually, McCarthy stumbled across the scam and ordered an investigation, but before one gets too excited by her acumen, remember that Beale was her direct report. She had to sign off on his fake expense reports, and the bonuses he received while not showing up to work at all.

But wait, tragically there’s more in McCarthy’s record to show a pattern of failed leadership and, in this case, the consequences were fatal.

On her watch as the head of Connecticut’s Department of Environmental Protection, accidental drownings continued at Connecticut parks due to the failure of her agency to properly manage staffing of areas under her control. Between 1999 and 2007, 21 people drowned. A local newspaper, after noting that Gina McCarthy was well aware of the lifeguard staffing problem at state parks, wrote, “The summer season is over at Squantz Pond [State Park], but the spotlight must remain on the Department of Environmental Protection’s mismanagement of this park.”

The heartbreaking fact is that McCarthy’s Department’s failure to adjust lifeguard schedules and swimming area availability to meet the staffing in place was spotlighted by the media as being directly responsible for the avoidable deaths.

As if all that weren’t enough, while McCarthy served as Assistant Secretary of Pollution Prevention, Environmental Business and Technology in Massachusetts, the Department of Environmental Protection (DEP) was notified that its vehicle emissions tests were seriously flawed. Cars that should have failed were being passed, and vice versa. Sierra Research, which was hired by Massachusetts to review the testing program, wrote that the false failures rate was “the highest by far ever seen by Sierra.”

What did McCarthy do upon discovering this system that was putting polluting cars back on the road while red flagging ones that should have passed the emissions test? Her Agency had Sierra Research massage the numbers to make them seem better. After checking the testing machines, Sierra Research then discovered that about half didn’t work. Undaunted, McCarthy’s team continued to administer the faulty test anyway.

As the mustard-yellow EPA toxic spill oozes its way southward toward the Colorado River and Las Vegas’ drinking water in Lake Mead, it is important to remember that the same person overseeing the EPA also ignored a broken radiation detection system that could have proved disastrous, failed energy-conscious consumers, left swimming areas without lifeguards leading to multiple deaths, gave bonuses to a high profile non-attending employee and operated a state emissions testing system where about half the testing machines didn’t work.

McCarthy’s long history of managerial failure can no longer be chalked up to bad luck. She has been trusted to run the Environmental Protection Agency, and under her stewardship vital western waterways have been destroyed. If President Obama refuses to hold her accountable, Congress should, by withholding her salary as part of the government funding process.

Given Gina McCarthy’s track record, her current failed management of the EPA is the most predictable disaster in history, and no one can say the Senate wasn’t warned. Americans for Limited Government produced and distributed a report on McCarthy’s record of managerial mess-ups along with evidence of her ideological unsuitability to lead the EPA when she was under consideration for Senate confirmation.

This is one time it truly hurts to have to say, “We told you so.”

NN&V StaffFebruary 7, 2020
Read More
Scroll for more
Tap
Nevada Taxpayers should have the Last Word on Largest Tax Hike in history
Parents being forced to force tablets on students
Skip to toolbar