(Christina Parreira) – Prostitution has been legal in Lyon County, Nevada for over forty years. In that time, the Nevada model for licensed and regulated prostitution has proven to be a time-tested and remarkably successful social experiment, where, under an umbrella of strict legislation, sex workers operating out of rurally-located brothels thrive harmoniously with their Lyon County neighbors. Now, after all these years, a small group of Lyon County residents have decided that they have a beef with the bordellos.

The group calling itself “No Little Girl” is petitioning to close the legal brothels in Lyon County, and remove the livelihood of hundreds of women who have made an informed choice to work in these establishments. On the “Issues” page of this group’s website, they make claims that the legality of brothels does nothing to make women any safer, and that prostitution is inherently violence against women. However, the page cites data that either has been debunked or has nothing to do with legal prostitution. The handful of individuals that submitted the petition represent faith-based organizations, and seem to be more concerned with pushing their specific moral agenda onto the entirety of Lyon County than with the actual safety of the women in the brothels. Let’s take a closer look at the information on the group’s website… 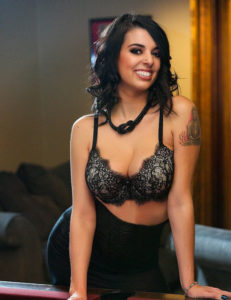 Christina Parreira is a legal sex worker and PhD student at the University of Nevada, Las Vegas

The group suggests that large tech companies won’t move to the county and boost the local economy because of the existence of legal brothels, but they neglect to mention that Lance Gilman, owner of the Mustang Ranch brothel, helped bring Tesla to Nevada. The massive Tesla Gigafactory is located seven miles from the Mustang Ranch, proving that tax incentives and smart dealmaking are what bring big name tech companies into an area. Brothels are clearly not a factor in the decision making, especially when one considers that a brothel owner played a key role in convincing a tech giant to choose Nevada for its factory location.

Concerning the safety of women in the brothels, the website cites Melissa Farley, a researcher whose work was debunked years ago. Farley claims to have interviewed 45 women in the Nevada brothels but discounts their comments in her 2007 book, writing “I knew that they would minimize how bad it was” (p. 22). Farley writes that her data does not support her conclusions because women “ignore bad things or they pretended that unpleasantness will go away, or they call the degrading abuse of prostitution by another name that sounds better” (p. 22). Farley did not listen to the women and instead formed her conclusions based on her own moral agenda. In 2011 Dr. Calum Bennachie, a gender studies scholar, sent a 115 page formal complaint to the American Psychological Association requesting that Farley be disqualified for professional misconduct. In his complaint he detailed evidence to show that “Dr. Farley is repeating unsubstantiated rumour as fact” and “is deliberately misleading people” (2011). Farley has a long and well-known history of discounting the voices of sex workers in an effort to push her ideological agenda. The website also cites a 2004 study by Potterat, but the sample is from women working independently in Colorado; a very different group of women with work conditions that are nothing like those in the legal Nevada brothels. Women who work illegally are subject to rape and assault because they do not have protections under the law. Criminalization forces them to work in unsafe settings and unlike in the legal Nevada brothels, they cannot call for help when they are raped or assaulted. This speaks to the harms of criminalization, not of prostitution. 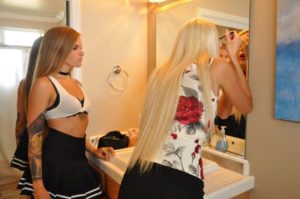 Chance Monet and Tiara Tae from the Moonlite Bunny Ranch in Lyon County
On the FAQ page, it states that women are often raped in the legal brothels. This is grossly inaccurate. In my own doctoral research of 53 women working in 5 Nevada brothels, I did not encounter a single woman who had reported being raped by a client in the brothel, and I was certainly never raped during my years working in the brothels. Perhaps the most inflammatory claim on the FAQ portion of the website is that most of the women in the brothels are under the control of pimps. This is simply not true. Of the 53 women I interviewed, 5 reported that they had pimps BEFORE they worked in the brothels but since coming to work legally were able to escape this coercion and freely offer intimate services. One worker told me of the horrific abuse she endured at the hands of a pimp, and she was grateful to have escaped him and be in a place where she could work safely and legally. She credited her newfound safety and freedom to the brothel. She feared that if she went back to her home state, her former pimp would find her, kidnap her, and force her back on the streets. 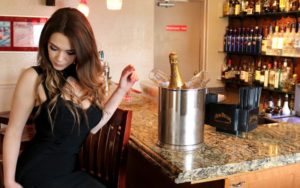 Roxanne Price from the Love Ranch in Lyon County

Roxanne Price from the Love Ranch in Lyon County
The FAQ section claims that legalization does not improve conditions for prostitutes or women in the community. We can look to Rhode Island as a case study: In Rhode Island prostitution was decriminalized from 2003-2009. A study done by Cunningham & Shah (2014) shows that rates of rape and gonorrhea plummeted with decriminalization; 824 fewer rape offenses (31 percent decrease) and 1035 fewer cases of female gonorrhea (39 percent decrease) from 2004-2009.

The FAQ section also asks the question “has anyone asked the women what they want?” My fellow workers and I have reached out to this organization over the past 2 weeks, desperately trying to make our voices heard. We tell them that we are happy with our chosen careers and that we do not want to lose our jobs, but they are not listening, and continue to push their moral agenda onto us.

As a licensed prostitute and PhD student at the University of Nevada, Las Vegas, I can tell you that what I want is to continue to have the freedom to choose to work in a safe environment, where I can practice a trade that I love, lawfully and prosperously. Sex work is definitely not my last resort or my only option — it is my choice. I’d like to continue to have the opportunity to make that choice legally.

If you really care about us, just listen to us.