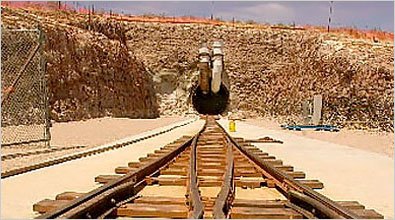 (Kirk Lippold) – For decades, the United States has wrestled with the need to develop a long-term solution to the nuclear waste products created in our country. With the Nuclear Waste Policy Act of 1982, the subject of creating a safe, secure, and permanent repository for handling the nation’s high-level radioactive waste has been a divisive issue. Today, it is imperative that national security and scientific facts take precedence over political stalling tactics and a NIMBY- “Not-In-My-Back Yard” attitude. Taxpayers have spent billions of dollars investing in the build out of the Yucca Mountain Nuclear Waste Repository.

A key provision of the Nuclear Waste Policy Act mandated that the U.S. government would take possession of spent nuclear fuel. As part of the government’s obligation, a process was established for power companies to pay into a fund to cover the taxpayer liability for handling this fuel. This liability continues to grow and the courts have affirmed that government still has a responsibility to provide for a secure facility. Legal fees alone to fight the opening of Yucca Mountain have already exceeded $375 million and those costs will only increase in the future.

Progress toward energy independence has experienced its ups and downs and the social pressure to meet it with clean energy, including nuclear power, is a growing imperative. Nuclear energy is seen a mainstay of the clean energy future for the nation. With this changed dynamic, opening Yucca Mountain is an even more pressing issue. Technical advancements in the science of reprocessing nuclear waste has now made it possible to reuse much of the material that would have gone into storage and, in fact, reprocess for use by the nuclear power industry. Like any business, but especially those dealing with nuclear material, the need for a stable and predictable environment on how to handle, transport, and deal with waste products must be addressed with a path to a long-term solution.

For years, I have advocated that my home state of Nevada should open the Yucca Mountain Nuclear Waste Repository. I have also encouraged the development of a nuclear waste processing facility collocated with the storage facility to provide an ongoing method to reuse the waste and provide a long-term energy source for the nation’s growing energy needs. With the advent of advanced nuclear reactors and the growing technical feasibility of safe reprocessing techniques, especially those pioneered by the French, nuclear power can continue to be a source of clean power for the foreseeable future, as well as a reliable energy backbone that complements other sources of green energy.

While not necessary since it is a federal facility on federal land, like any controversial project, there should be some enticement for Nevada to accept this facility. Though jobs and the attendant economic benefit of operating the repository and reprocessing facility is nice, a more acceptable solution would be to invest in the higher education facilities in Nevada to make the state’s universities the pinnacle institutions for educational matters concerning all things nuclear – engineering, energy, medicine, and physics to name a few. By investing in the education of the nation, this path also offers a way for the nuclear power industry to shore up confidence in local communities, investors, and developers that there is a clear and defined path forward for the nuclear power industry, including the safe and responsible disposition of nuclear waste.

The future of U.S. energy independence is a national security imperative. Part of that future lies with the continued development and expansion of the nuclear power industry. Nuclear power remains a critical source of clean energy and a reliable source of power for the country but the issue of how to best utilize and store the waste products must be addressed. The time for opening Yucca Mountain is long overdue and it’s time to get past the politics and build a nuclear-powered future for the nation.

CDR Kirk Lippold (@KirkLippold) is a retired naval officer who was Commanding Officer of the USS Cole (DDG 67) when it survived a suicide terrorist attack by al Qaeda. He is the president of Lippold Strategies, LLC.  This column was originally published in The Hill on May 1, 2017