So as everyone paying even the slightest attention knows, Senate Republicans, misled by Senate Majority Leader Mitch McConnell, failed to honor their 7-year promise to repeal ObamaCare before going on their summer vacations. 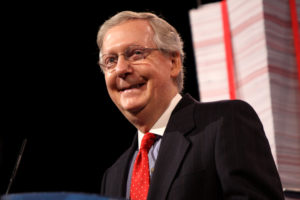 And one of the key reasons was opposition from a handful of moderate GOP senators, including Nevada Sen. Dean “Never Trump” Heller.

Because the Heller campaign is working overtime to now convince Nevada voters that up is down and black is white, here’s the indisputable bottom line:

When asked about the ObamaCare repeal failure by News 4 in Reno yesterday, Heller said, “I feel real pleased with the way this thing turned out.”

Which is exactly how a lot of conservatives are going to feel on election night next June when Heller is defeated by Danny Tarkanian in the GOP primary.

Speaking of Heller vs. Tarkanian, Nevada’s #2 liberal blogger, Jon Ralston, is trying to make a big stink out of Tark and others, me included, calling Heller a “Never Trumper.”

99 percent?  That’s a rounding error.  And it was a too-cute-by-half statement.

And incumbent moderate Republican Treasurer Dan Schwartz, who has said he’s not running for re-election, nevertheless seemed a bit peeved by the announcement.

Schwartz issued a terse statement following Beers’ announcement: “The next State Treasurer needs to be someone willing to stand up for the people of Nevada, even when it means standing up to their own party.”

Is he trying to insinuate that Beers won’t stand up to the GOP establishment?  If so, it’s apparent that this relative newcomer to Nevada and Nevada politics needs a little history lesson.

And as a member of the State Senate, Beers was a thorn in the side and burr under the saddle of then-Republican Senate Majority Leader Bill Raggio.

Say whatever else you want about Beers, you can’t say – or even intimate – that he won’t stand up to the GOP’s powers-that-be.  He’s got a track record in that regard a mile long.

So lighten up, Frances.

Look, this ain’t rocket science.  Democrats right now have an effective 12-9 registration advantage in the Senate – with “independent” party-switcher Patricia Farley caucusing with the D’s.  And Farley is really the only real chance Republicans have of flipping a seat in 2018.  Which would still leave the D’s with an 11-10 majority.

But if Woodhouse – who represents a swing district – is recalled and replaced by Carrie Buck, the Republican candidate who came up just short by 469 votes last November, Republicans could potentially get back into the majority with their own 11-10 advantage.

In fact, yesterday a similar recall against Farley was announced.  The trans-partier responded in a huff that she won’t be running for re-election next year for any office under any party.  But the recall will move forward anyway because if both are successful, Republicans will regain the majority even BEFORE the 2018 elections.

And for the record, Nevada law allows for a recall with no stated cause required.  If this recall is being launched for purely political reasons, well, that’s the law.  If the Dems don’t like it, change the law.

That said, legislators have already made it darned near impossible to recall an elected legislator regardless of the reason.  Not only do you need to gather enough signatures equal to 25% of registered voters in the district – as opposed to just 10% to qualify a ballot initiative – but those voters MUST have voted in that senate race last November.

So this is a REALLY tough hill for Republicans to climb.  But in looking at their electoral prospects in races that are actually up next year, it’s actually the only hill they have at their disposal.

And considering how Democrats have gerrymandered legislative districts in Nevada against Republicans for political reasons for decades, methinks they doth protest too much.

“The Nuclear Regulatory Commission’s (NRC) move to use funding toward licensing activities at Yucca Mountain is yet another waste of taxpayer money on a failed project that has already cost the federal government billions of dollars over the past 30 years.”

How can it be a “failed” project if it’s, um, still alive and moving forward because, um, it’s the law of land and Congress has never rescinded that law?

Heller continued with the huffing and puffing…

“Nevada has made clear it will fight Yucca Mountain every step of the way and contest each and every one of the 200+ elements of any license application. I’m disappointed in the NRC’s reckless and fiscally irresponsible decision to throw more taxpayer dollars on a project that Nevada continues to reject…  I’ll continue to lead the fight against Yucca Mountain and ensure this proposal remains dead.”

Harry Reid couldn’t have put it better himself!

At what point will Nevada’s self-serving politicians pull their collective heads out of their keisters and start negotiating for lucrative benefits for the people of Nevada, as well as hardline safety measures?