Nevada State Treasurer Dan Schwatz’ announcement this week of his quixotic candidacy for governor landed with all the excitement and enthusiasm of a dead cat bounce.

The moderate Republican, with little to no detectable base of support, made his “big” announcement at the Republican Men’s Club luncheon in Las Vegas on Tuesday – clearly because a stand-alone announcement event by the campaign itself would have attracted as many people as a malaria symposium giving away free samples.

Some observations of the truly embarrassing roll-out…

We’ll start with my table before the luncheon began.

Despite the announcement being marketed aggressively to members prior to the event, one lady asked, “Is somebody announcing his campaign today?”  I responded, “Dan Schwartz.”  She replied, “Who?”  I countered, “Exactly.”

A multi-step staging area was constructed behind the podium for people to stand on to provide a video optic for the news cameras which supposedly would demonstrate widespread grassroots support for Schwartz.  It didn’t quite work out that way.

I spoke to one woman who was up there during the dog-and-pony show after it was over and she told me one of the event organizers had asked her to stand there even though she had no idea why.  She said she wasn’t a Schwartz supporter but was asked to just “fill up space.”

Hilariously, another of the handful of folks lined up behind the nascent candidate was ALSO another Republican candidate for governor!  Somehow I don’t think he was a Schwartz supporter either.

On the other hand, there was one prominent figure on the stage who WAS a Schwartz supporter – but somehow I don’t think his presence was exactly helpful for a candidate seeking the REPUBLICANnomination for governor…

I wonder which political svengali thought THAT was a great idea?  I could write the campaign mailer in my sleep.

Then came the candidate’s speech and formal announcement…

A discussion of the Yucca Mountain Project took place at a conference, the RadWaste Summit, in Las Vegas on Wednesday, with state bureaucrats continuing with their usual disinformation campaign – it’s own “fake news.”

Robert Halstead, the latest head of the Nevada Agency against Nuclear Projects, declared that the state will continue to use taxpayer dollars to oppose even the suitability STUDY of the proposed nuclear waste repository.

So much for letting the science, not the politics, determine the viability and safety of the project.

According to reporter Henry Brean of the Las Vegas Review-Journal, Halstead declared that the Department of Energy “has not sufficiently demonstrated” that the waste pellets from nuclear plants across the country can be safely transported and stored at Yucca.

Of course, the main reason the DOE hasn’t been able to demonstrate whether or not the project can be safely administered is because former Sen. Harry Reid and former President Barack Obama cut off funding for the licensing process.  Derp.

Halstead then went on to claim that “political opposition to the project is stronger than ever while public opinion is largely unchanged, with around 75 percent of Nevadans opposed” to the project.

A growing number of elected officials – albeit many who are still afraid to go public with their opinions – now favor completing the study, as well as opening discussions related to safety concerns and the potential benefits of the project for Nevada’s citizens for doing the nation this service.

Indeed, as Nye County Commissioner Dan Schinhofen pointed out during the discussion, “nine rural counties have passed resolutions calling for the licensing (process) to resume and the science to be heard.”

“We support positioning Yucca Mountain as a world class, high-tech nuclear research and science facility predicated upon sound, safe and proven scientific principles.  Nevada should negotiate an agreement so that Nevadans enjoy the financial and economic benefits of hosting the nation’s nuclear assets.”

In addition, Halstead failed to cite any recent, credible, professional poll that backs up his purported claim that 75 percent of Nevadans remain opposed to the project.  He just made that up.

If storing the nation’s nuclear waste at Yucca Mountain is as dangerous as these self-serving politicians want us to believe, how much MORE dangerous is it to the nation to have it stored on-site at nuclear power plants scattered throughout the country?

And the fact remains, Congress passed a law – like it or not – back in 1987 that designates Yucca Mountain as the repository site.  And if Reid and Obama couldn’t change that law when they were in power, it ain’t gonna be changed anytime soon.

So it’s just stupid, foolish and irresponsible for Nevada’s politicians to continue burying their heads in the Yucca Mountain sand and refuse to protect the interests of Nevada’s citizens by engaging in discussions and negotiations related to the project.

We should start by defunding the shuttering the taxpayer-funded, anti-Yucca Nevada Agency against Nuclear Projects and force Mr. Halstead to find a real job. 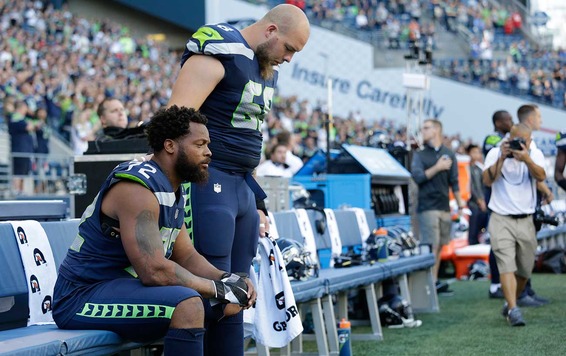 Michael Bennett is one of those spoiled, ungrateful, anti-American/anti-cop NFL football jerks who refuses to stand during the playing of the National Anthem before the start of football games.  And he was in Las Vegas for the big Connor McGregor/Floyd Mayweather fight two weeks ago.

After the fight, the Seattle Seahawks defensive lineman went to the Drai Beachclub at the Cromwell on the Strip to spend some of his millions.  And according to a story in Thursday’s Las Vegas Review-Journal, he and other clubgoers “panicked after statues that were knocked down on a tile floor sounded like gunshots.”

According to the story, Bennett hid “behind a gaming machine” as “officers conducted a sweep of the casino floor searching for a possible shooter.”

“When officers saw Bennett,” the article continues, “he ran outside and jumped a wall into traffic, where he was detained.”  The report adds that “officers thought Bennett may have been involved in the reported shooting.”

Gee, the guy was hiding and then ran away when officers spotted him.  I wonder why anybody might think that maybe, just maybe, he was somehow involved?  Derp.

Naturally, that’s not how Bennett is describing the event.  According to him, officers singled him out “for doing nothing more than simply being a black man.”

Bennett went on to claim that this is “why before every game, I sit during the national anthem – because equality doesn’t live in this country.”

And why (attention advertisers!) I refused to the read the special section in today’s newspaper about the official start of the 2017 NFL season and won’t be watching the kickoff game tonight.  #NFLBoycott.