Gingrich vs. Ryan: The Warrior and the Wonk

Gingrich vs. Ryan: The Warrior and the Wonk
N&V Staff 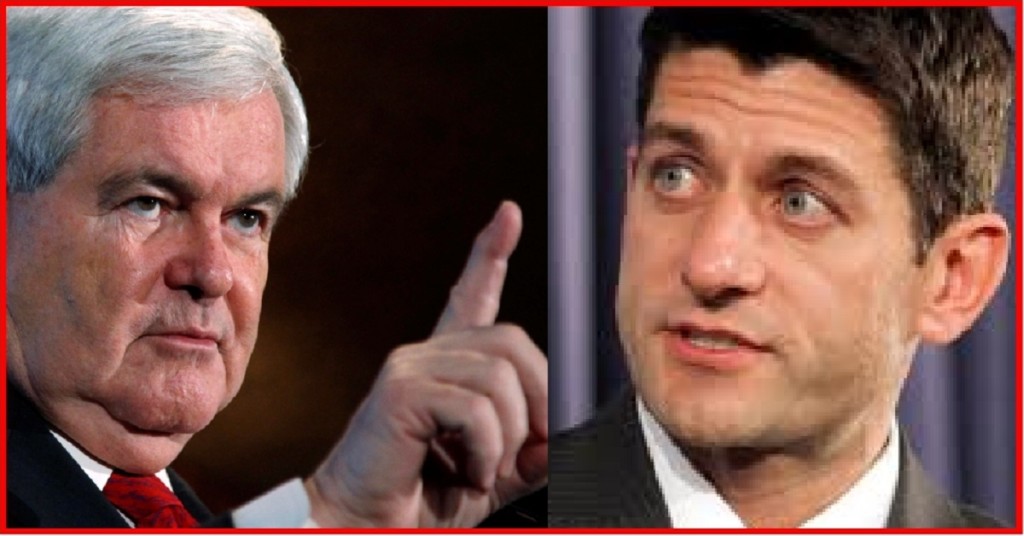 Republicans in the House of Representatives were suffering the indignities of their 40th straight year in the political wilderness as the minority party.  Then emerged a visionary: a then-unknown GOP congressman from Georgia named Newt Gingrich.

For over a dozen years, Gingrich and a handful of conservative insurgents laid the foundation for a Republican takeover of the House.  At the core of the effort was an ingenious plan to nationalize 1994’s congressional elections.  Thus was born the now infamous “Contract with America.”

Every Republican House candidate signed the Contract, which promised the American people that if they gave the GOP the majority, the GOP House would vote on ten widely popular, poll-tested bills in the first 100 days.

Talk about raising a banner of bold colors!

As we all know, voters did give the GOP that majority, and Gingrich was elected speaker.  Under his leadership, Republicans honored their word and acted, voting on all ten planks of the Contract and passing nine of them.

During that era, Gingrich also recruited and trained a new generation of conservative activists, campaign professionals, and candidates through an organization he helped set up called GOPAC.

The man was the absolute epitome of a “movement” conservative.  He didn’t just talk the talk.  He walked the walk.

And even though he had his share of run-ins with then-Senate majority leader Bob Dole at the time, Gingrich enthusiastically supported Dole as the GOP’s presidential nominee in 1996, as he’s done for every other GOP presidential candidate thereafter.

Now compare all that to current House Speaker Paul Ryan.

Ryan has been in Congress for 18 years, and Republicans have been in the majority for, I think, all but four of them.

Last fall, Ryan reluctantly agreed to take over as speaker after John Boehner unexpectedly resigned – but only after steadfastly declaring he would not travel all over the country helping to raise money for his individual colleagues, conservative organizations, or the local and state GOP organizations.

His “Young Guns” program recruits and supports carefully selected congressional candidates, but nothing that comes even close to the breadth and depth of GOPAC’s operations, especially at the state and local levels.

Despite having been speaker now for over 200 days, Ryan only recently began rolling out a Contract with America-like policy agenda that he’s dubbed “A Better Way.”  To be clear, these are simply policy proposals, not legislation.  The “action” taken on them so far has consisted of “Better Way” press conferences, press releases, and tweets.

Talk about raising a banner of pale pastels!

Again, Ryan has been speaker for over six months – and Republicans have been in the majority for the last six years.  So why are we getting nothing but “proposals”?  Where are the bills?  Where are the votes on those bills?

This brings up another sore subject.  Instead of enthusiastically supporting the GOP’s presidential nominee, Ryan only reluctantly endorsed Donald Trump and has since taken every opportunity to submarine and knee-cap him in interview after interview.

Is it too much to ask Mr. Ryan to just follow the sage advice that if you can’t say something nice about someone, don’t say anything at all?

Lastly, while lamely leading House Republicans into a summer of all talk and no action – and while playing the role of Brutus to Donald Trump’s Caesar – Ryan has also forgotten the people back home in Wisconsin’s 1st Congressional District.

Instead of fixing those problems for the home folks, Mr. Ryan is actively working to make things worse, serving as head cheerleader for the job-killing ObamaTrade (TPP: Trans-Pacific Partnership) agreement.

Simply put, Paul Ryan isn’t getting the job done.  Paul Ryan has let us down.  Paul Ryan is all talk, no action.  All hat, no cattle.  All proposals, no results.

He went to Washington a long time ago with the best of intentions.  But he drank the Potomac Kool-Aid, started believing his own press, and forgot to dance with the ones who brung him.

When a team fails to perform, you don’t fire the entire team.  You fire the coach.

House Republicans aren’t performing.  As such, it’s time to fire the coach.  It’s time for Paul Ryan to go home and let someone new take the helm.

Mr. Nehlen is a successful small businessman who has brought hundreds of jobs back to the United States from China, Mexico, and Canada during his career.  He’s a Republican candidate running for Wisconsin’s 1st Congressional District.