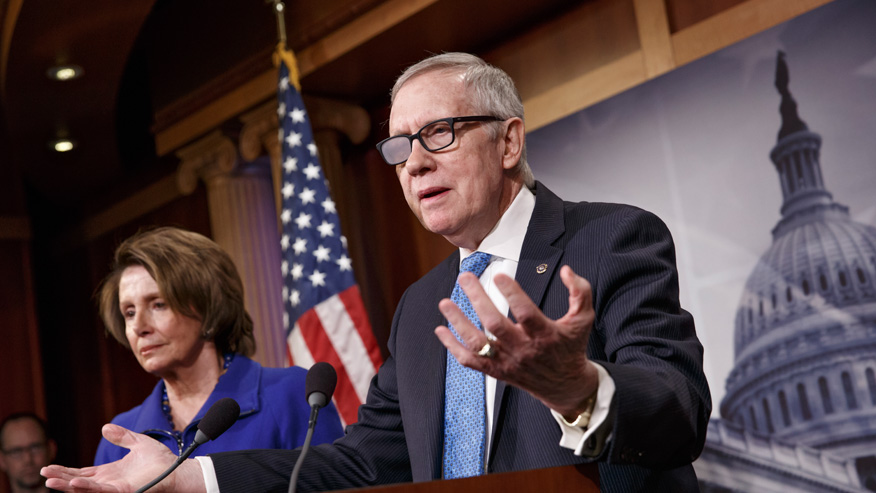 (Wayne Allyn Root) – I am a proud citizen of beautiful Las Vegas, Nevada. I escaped New York for “the Monte Carlo of America”– beautiful weather and sunshine all year long, with no personal income taxes, no business income taxes, no capital gains taxes, no inheritance taxes and the 9th lowest property taxes in America. What does a conservative call a place like that? HEAVEN.

And things just got even better. Nevada U.S. Senator Harry Reid just announced his retirement. Around the country, there is shock. In Nevada, there is only relief.

Harry Reid has served in the U.S. Senate for almost 30 years. He’s certainly the worst Senator of my lifetime — the past 53 years. Amazingly, Harry isn’t just my Senator, he’s my neighbor. If we made a reality show together, it would be called “The Odd Couple.”

Harry suffered a series of strokes.

Harry made a series of bizarre gaffes.

Senator Reid’s last few years in the Senate have been so filled with falls, injuries, medical emergencies and embarrassing statements, I actually felt sorry for him. I wish him a wonderful retirement. It’s time for golf, grandchildren and cruises to Mexico. Harry Reid clearly made the right decision for the country, the Senate, the people of Nevada and himself.

Then there’s Harry Reid’s record. By moving from a pro-gun, NRA-endorsed, “conservative Democrat” upon entering the Senate…to Obama’s point man for an extreme left radical agenda, Harry did great damage to the U.S. economy, our children’s future and his own legacy.

Harry Reid will be remembered as the chief enabler for the massive expansion of government, spending, taxes, regulation and debt under President Barack Obama.

Harry Reid enabled Obama to depress the private sector with the most regulations in history; thereby killing millions of jobs; suffocating the middle class; damaging small business; and allowing an ill-fated government takeover of the greatest healthcare system in the world.

Harry enabled Obama to achieve all this while purposely preventing the U.S. Senate from voting on any bill that might help the economy, or undue the damage of Obama’s radical Nanny State policies. Harry refused to allow bills to be voted on, for fear of hurting the re-election campaigns of his fellow Democratic Senators. He even presided over the passage of “the nuclear option” for the first time in U.S. Senate history, thereby breaking tradition and allowing nominations to pass the Senate with merely a simple majority.

But I’m a big fan of turning lemons to lemonade. There is a way to turn Harry Reid’s legacy into a positive. Let’s pass new term limit restrictions with Harry Reid’s last few years in mind. Term Limits would have forced Harry out of the Senate before much of this damage was ever done. What a blessing that would have been for America and the U.S. economy.

Let’s make certain politicians like Harry Reid can’t stay past their “spoil date.” Let’s take that decision out of their hands — just as airline pilots are forced into retirement at a certain age, for the good of the flying public.

Harry Reid is indeed the poster child for Term Limits.

Let’s honor him by calling this bill “The Harry Reid Term Limits Rule.” In honor of Harry, from this day forward all politicians should be limited to two terms. One term in office. And one term in prison.

Wayne Allyn Root is a Capitalist Evangelist, serial entrepreneur, conservative national media commentator, and proud champion of the middle class. He is former Libertarian vice presidential nominee, now back to the GOP. For more, visit his website: www.ROOTforAmerica.com.