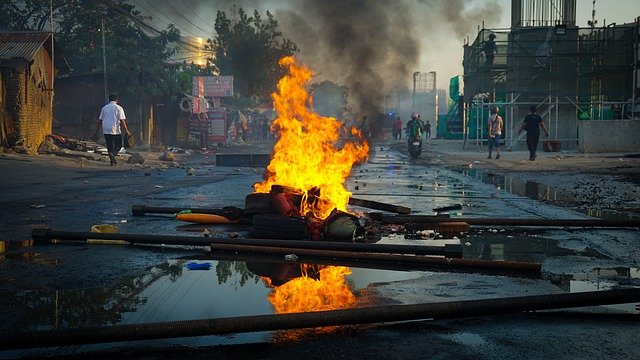 Image by Fajrul Falah from Pixabay

(Ron Knecht) – Monday, five Republican senators – Ted Cruz, Ron Johnson, Mike Lee, Rick Scott, and Tommy Tuberville – wrote to Merrick Garland, Attorney General in the Biden/Harris administration, to learn whether the federal Department of Justice is treating people arrested in the January 6, 2021 riot at the Capitol fairly relative to the thousands who rioted in many American cities last year.
They noted that in the 2020 riots and crimes one federal officer was killed, 147 federal officers were injured and 600 local officers were injured around the country.  Between 11 and 25 others were killed.  Property damage, including that at federal facilities, from fires, looting, theft, etc. in those riots may reach $2-billion.  Also, there were 81 Federal Firearms License burglaries for an estimated loss of 1,116 firearms, 876 reported arsons, 76 explosive incidents and 46 ATF arrests.
By contrast, no officers were killed in the Capitol riots and the property damage was a small fraction of that in 2020.  No arms have been found to have been carried by Capitol rioters, one of whom was killed by a federal agent.  Four others died from natural causes or a drug overdose.
The senators noted prosecutors have approved deals in at least half-a-dozen 2020 federal felony cases in Portland that may result in defendants serving no time and having clean criminal records.
The senators said: “DOJ’s apparent unwillingness to punish these individuals who allegedly committed crimes during the spring and summer 2020 protests stands in stark contrast to the harsher treatment of the individuals charged in connection with the January 6, 2021 breach of the U.S. Capitol Building in Washington, D.C.”
They expressed their concern that the two matters may involve “unequal justice” by the Department of Justice (DOJ).
They requested answers to 18 questions comparing DOJ’s handling of the two episodes (nine questions on each episode), including:
Did federal law enforcement use geolocation data from defendants’ cell phones to track protestors in each case?  If so, how many times were geolocation data used, and how many January 6 additional arrests resulted from this activity?
How many individuals who may have committed crimes in each case were arrested in pre-dawn raids and by SWAT teams?
How many individuals were incarcerated for allegedly committing crimes in each episode?
How many people have been placed in solitary confinement in each episode and for how long?
How many of the people arrested in each matter have been released on bail?
How many of those arrested in each matter have been released on their own recognizance or without being required to post bond?
How many individuals in each episode were offered deferred resolution agreements?  (These are the arrangements that may yield no incarceration and clean criminal records.)
How many DOJ prosecutors were assigned to work on each of the matters involving people who allegedly committed crimes?
How many Federal Bureau of Investigation personnel were assigned to work on cases involving defendants who allegedly committed crimes in each matter?
Democrats, progressives, statist liberals, mainstream media and leftists of all kinds have worked themselves into a lather trying to characterize the January 6 protest and riot as an “armed insurrection” even though no arms were found on the rioters and other protestors.  Anderson Cooper of CNN called the January 6 episode the worst threat to America since the Civil War.  Apparently, he hasn’t heard of September 11, 2001 or Pearl Harbor – or even the massive, extensive riots of 2020.
Nancy Pelosi and many others also have called it a “siege.”  That shows their complete ignorance and dishonesty.  A siege is a military or police operation in which forces surround a town or building and cut off essential supplies, with the aim of compelling the surrender of those inside, especially armed persons, to surrender.
These folks also bent themselves and the language equally out of shape trying to characterize the 2020 riots as mostly peaceful protests, even as their cameras and microphones recorded gun fire, explosions, massive fires, looting and assaults.
Between these ridiculous partisans and their lamestream media, Americans rightly fear we face massive injustice and government abuse.  The Biden/Harris administration and the Democrat congress aren’t kidding: they will do anything to get absolute power over us.
Prev postNext post
Related ItemsRon Knecht
Opinion
Ron Knecht