My Friend, the Gay Terrorist Sympathizer

(Chuck Muth) – Talk-show host Glenn Beck was all over a jaw-dropping, earth-shattering revelation last week, sounding the alarm from coast-to-coast about a “very dangerous” national conservative leader.  If you haven’t heard this story already, you’re simply not going to believe it… 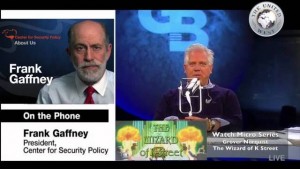 And according to a notarized affidavit by a man named Frank Gaffney, president of the Center for Security Policy, he witnessed that morning three elevators on the floor of his Washington, DC office “disgorging a large number of individuals” dressed in various forms of Muslim attire shortly after the terrorist attacks on the World Trade Center and the Pentagon.

The “approximately twenty” individuals – or as he later described the group, “a Noah’s Ark of Muslims in every imaginable form of regalia” – walked “to approximately six feet” from Mr. Gaffney before turning to enter a conference room.

“The last to arrive and join the rest in the conference room,” Gaffney swore in his affidavit, dated September 28, 2013, “were Grover Norquist and Suhail Khan.” 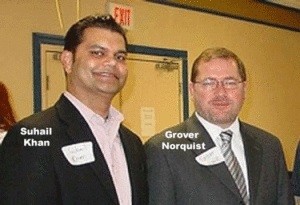 Norquist, president of Americans for Tax Reform (ATR), is the high-profile conservative leader with whom Mr. Gaffney shared office space on the same floor.  Khan was, at the time, a White House staffer with the Office of Public Liaison.

According to Mr. Gaffney’s affidavit, one of Mr. Gaffney’s paid staffers had an office adjoining the shared conference room and “stood on his desk and lifted the false ceiling’s acoustic tiles that covered the shared wall” and “was able to eavesdrop for a time and overheard some of the conversation that occurred at the meeting.”

“Damage control,” Waller explained, “was the purpose of Grover’s meeting that day.”  He concluded with, “So that’s what Grover Norquist was doing on September 11th, 2001.”

I’ve known Grover personally for almost two decades.  In fact, he’s been a close friend of mine.  We’ve had dinners together.  Breakfasts together.  Lunches together.  Drinks together.  I’ve been to his home.  He’s spoken at my events.

I had no idea he was the lead “spin doctor” in a conspiracy meeting with “leaders” and “activists” of the Muslim Brotherhood on 9-11 plotting against America.

That’s because, um, it’s not true.

There was never any such meeting.

With or without Grover present.

It’s a complete and total fabrication.

Frank Gaffney is full of crap.

The fact is Grover was nowhere near his office in Washington, DC that day, let alone led a meeting of some two dozen hijab- and burqa-wearing Muslim Brotherhood conspirators in his conference room.

Grover was in California the night before, speaking to the San Diego Republican Party.  And, as one can imagine, he had some travel difficulties getting back to the office the next morning.

Gaffney’s been peddling this character assassination and been on a personal jihad against Grover for over a dozen years now.  And he’s “punked” an awful lot of good people into believing his tale over that time.  Beck is just the latest and most prominent.

But Beck has a rather sizable megaphone.  So now’s as good a time as any to finally clear the air and publicly tell, as Paul Harvey would say, the rest of the story.

Frank Gaffney has a known history of spouting anti-Muslim rhetoric that is not limited to confirmed jihadists.  He’s even gone after Grover’s Palestinian-American wife, Samah Norquist.

Yes, according to Gaffney, Grover’s marriage to a Muslim is one of his six-degrees-of-separation “facts” that prove Norquist is a Muslim Brotherhood sympathizer.

(Oh, and by the way…you do know that Kevin Bacon has been linked to Osama bin Laden, right?)

Anyway, most of us in the conservative movement who know Grover and have worked with him over many, many years have dismissed Gaffney as a gadfly on an Ahab-like quest to politically harpoon the great tax-fighting conservative whale.

Grover finally had to ban Gaffney from attending the highly influential weekly center-right coalition meeting after Gaffney went on national television and falsely accused a young White House staffer, who was a friend of President Bush, of being in cahoots with terrorists.

Gaffney, to the best of my knowledge, is the only person who has ever been permanently kicked out of the Wednesday Meeting and banished to political Siberia.  Which, of course, only further infuriated Mr. Gaffney and has clearly fueled his fatwa against Norquist.

In fact, Gaffney’s life has become so singularly focused on destroying Norquist that when he realized that one conservative leader, George Landrith of Frontiers of Freedom, wasn’t buying his bull, he whipped out the “gay” card.

In a March 2, 2004 letter to the late conservative icon Paul Weyrich, Landrith described his conversation with Gaffney…

“But perhaps the strangest thing about Frank’s presentation was that he concluded by asserting several times that Grover was gay. . . . I was surprised by Frank’s obvious attempt at character assassination. Additionally, when I told Frank that I was sure that Grover was not gay because he was dating our Vice President of Policy, Kerri Houston, Frank went so far as to assure me that Kerri was being paid to pretend to be Grover’s girlfriend.”

This is insane.  And beyond the pale.

I know Kerri Houston.  Kerri is a friend of mine.  And she joked two weeks ago when I ran into her at CPAC that if she was being paid to be Grover’s girlfriend, he still owes her the money! 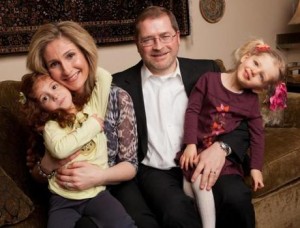 The accusation also flies in the face of the fact that Grover has been happily married to Samah – a beautiful, intelligent and charming woman – for ten years, and the couple have two children.

(Does this mean Samah is a member of the Muslim Motherhood?)

But here, let me tell you a story that’ll prove Grover’s not gay…

A few years ago I was in DC for business and had breakfast with Grover at the Mayflower Hotel a couple blocks from the Norquist-Gaffney offices.  He got a call from Samah on his cell phone.  They chatted a few minutes, and then Grover handed the phone to me.

He said Samah wanted to ask me a favor.

Apparently Grover had just gotten back from a speaking engagement in Syracuse, NY and left his winter coat behind.  So he was supposed to go to a men’s store across the street to buy a new one before going to the office.

Samah informed me that she didn’t think Grover had the right fashion sense.  So she outlined for me the exact coat style, length and fabric she wanted and asked me to make sure he bought the right thing.

Kidding aside, the reason all this Gaffney crud has come to the forefront again today is the fact that Grover is up for re-election to the board of directors for the National Rifle Association (NRA).

And in his obsession with destroying Grover in any and every way imaginable, Gaffney somehow fooled Mr. Beck into believing this 13-year-old tall tale.

And because Mr. Beck is a well-known national conservative figure, the NRA announced that it will do a complete and thorough investigation of Mr. Gaffney’s accusations.

Odds are, after the NRA finishes its inquiry it will come to the same conclusion that three other national conservative organizations that have already looked into this matter have already come to…

That there’s simply no there there.

That Mr. Gaffney suffers a fatal attraction to Mr. Norquist.

And that Grover’s daughters ought to keep their bunny safely locked away anytime Mr. Gaffney is in the neighborhood.

Now, can we get back to cutting taxes and looking for Hillary’s emails?

(Mr. Muth is president of Citizen Outreach, a conservative grassroots advocacy organization, and publisher of NevadaNewsandViews.com)