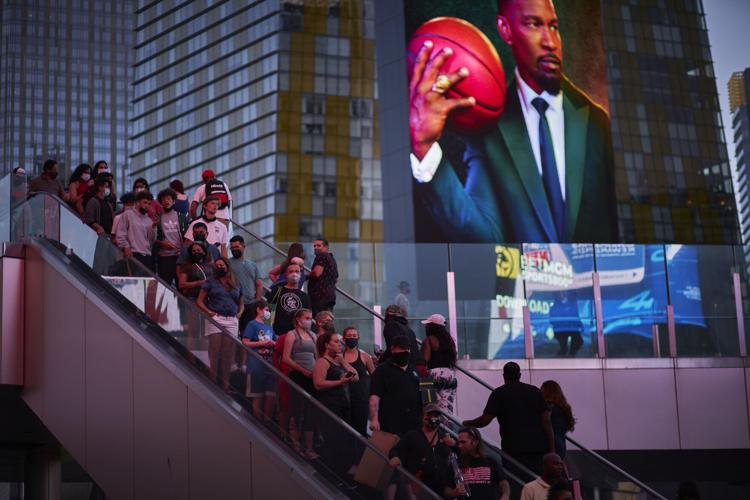 People ride an escalator along the Las Vegas Strip, Saturday, April 24, 2021, in Las Vegas. Las Vegas is bouncing back to pre-coronavirus pandemic levels, with increases in airport passengers and tourism.
AP Photo/John Locher

(Robert Davis) — A panel of fiscal experts in Nevada issued their forecast for the state’s biennial budget on Tuesday.

Nevada’s Economic Forum said on Tuesday that they anticipate state revenue to be $582.6 million more than what the body projected in December as the state’s vaccination rate increases and reduced restrictions on businesses allow the economy to recover.

Gov. Steve Sisolak said in a statement that the projection is proof that “Nevada’s economy is on a track toward recovery.”

“Our fiscal situation has improved due to the actions we’ve taken over the last 14 months in the State — working to strike a balance between protecting public health and also protecting our fragile economy,” he added.

In the short-term, however, Nevada lawmakers should expect to see fewer general fund dollars when they write the state budget. The main reason for the change is that the tourism and hospitality industries have not found their footing yet, the panel said.

“The pandemic will weigh on hospitality and especially accommodations for years, but conditions are improving,” the report said.

The Economic Forum compiled the report by comparing Nevada’s general sales and use taxes together with its annual tax revenue from gaming activities.

Economic Forum members are required to submit two reports annually — one in December and the other in May. Lawmakers are statutorily required to use the May report while writing the state’s budget.

According to the 2021 report, Nevada’s gross domestic product (GDP) between the first and second quarters of 2020 was down 42.2%. This tied the Silver State with Hawaii for the highest rate of decline relative to annualized GDP in the country, the panel found.

Job losses were primarily driven by restrictions on the tourism, hospitality, and gaming industries, the report found. This caused Nevada’s unemployment rate to hit 30% in April 2020. The state’s unemployment rate during the Great Depression was 14%.

As a result, sales and use tax revenue saw a year-over-year drop of 1.65% in 2020. Similarly, tax revenue from gaming licenses and percentage fees dropped by over 17%.

However, the report said there’s a “light at the end of the tunnel” for Nevada’s economy.

The panel anticipates both of these categories to experience significant growth in the fourth quarter. Sales and use taxes are forecasted to increase by 21.86% as retail and hospitality businesses return to full force.

Revenue from gaming is forecasted to increase by 263.27% by the end of next year.

Meanwhile, the state has been adding jobs back at a similar pace to neighboring states and the broader U.S. economy. The state added 4,700 jobs in March, according to the Nevada Department of Employment, Training and Rehabilitation.

“This acceleration will carry forward to the rest of Nevada’s economy in the coming months. As herd immunity is achieved, reduced epidemiological risks, pent-up demand, and excess savings will fuel consumer spending nationwide,” the report concluded.