The (Taxi) Empire Strikes Back! 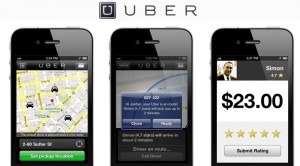 No sooner did free-market, ridesharing Uber drivers hit the streets in Las Vegas yesterday than the Taxi Cartel’s bought-and-paid-for police force began cracking down on them. Get this story from this morning’s Las Vegas Review-Journal…

“Uniformed officers were at the Fashion Show mall on the Strip late Friday to meet Uber driver Michael Elsner with a ticket. Five unmarked white Nevada Taxicab Authority vehicles surrounded his blue Ford Focus as he was driving east on Fashion Show Drive about 3:30 p.m. He was pulled over while trying to drop off two passengers. Two undercover officers wore black ski masks.”

“Wore black ski masks”? Are you f-ing kidding me!

“It’s like a sting. It was crazy, man. They had one cop on the front telling me to get out of the car, if I had any drugs. It was wild.”

His car was confiscated and towed to an impound lot, and the poor guy now faces a $10,000 fine.

For giving somebody a ride to the mall!

Fortunately, Uber will pay the fine and fees to get Elsner’s car back.

Now I know many of you aren’t yet familiar with Uber and this whole ridesharing business, so let me explain it in pretty basic, simple terms…

If you own a clean, safe, late-model car and want to pick up folks and drive them somewhere, either part-time or full-time, working on your own schedule as an independent contractor, you apply with Uber. Uber then does a background check and verifies that you have the necessary auto insurance.

Now if you’re an Uber customer, you set up an account online and give Uber a credit card number. If and when you need a ride somewhere – and choose, of your own free will, not to call a taxi and wait forever, let alone pay the sky-high taxi fares – you can request that a Uber driver come pick you up and give you a lift.

The driver is usually to your location within minutes. And the Uber smartphone app allows you to actually watch an icon of the car is as it makes its way to you.  You can also call or text the driver to tell him where exactly you are, what you’re wearing so he knows who you are, etc.

The fare is calculated using the driver’s smartphone and is automatically billed to your credit card…including tip. So you conveniently need no cash whatsoever to use the service.  It’s fast, efficient and comparatively less expensive.  I’ve now used the service in Los Angeles, Burbank, Phoenix and Denver and it is absolutely fabulous.

And one of the reasons is that you, as a customer, get to “rate” your driver after the trip. A driver who consistently gets low ratings will be dropped from the service, so it’s imperative that they go out of their way to provide you the best, most pleasant experience possible.

In fact, in Denver my Uber driver came INTO the terminal to meet me so I wouldn’t have to try to find him among all the other vehicles coming and going out on the busy street.

Try getting personal service like that from a traditional taxi driver!

No wonder Uber is so uber-popular.

Which is also why the Taxi Cartel here in Nevada is scared s***less.

As such, they were able to get Attorney General Catherine Cortez-Masto to seek an order from Carson City District Judge James Russell yesterday which now prohibits Uber’s drivers from operating anywhere in the state until a hearing is conducted on November 6.

It’s long past time to bust up the Taxi Cartel in this state.

If I, as an adult citizen in the United States of America, freely choose to pay someone a fee to take me to the grocery store or to my hotel from an airport, and that driver, also an adult citizen of the United States of America, freely chooses to provide that service for an agreed-upon fee, what the hell business is it of the government to tell us WE CAN’T DO SO?