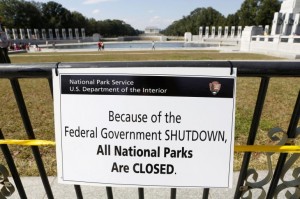 (Rep. Joe Heck) – It’s time to set the record straight on the partial government shutdown. The House passed, and I supported, multiple pieces of legislation to keep the government open. Unfortunately, the White House and Senate refuse to engage in negotiations about our spending and debt issues.

The partial shutdown of certain government services is the result of a conflict between those in Congress who want to address our country’s runaway spending and another group that very much wants to keep the status quo. While much attention has been placed on the role of the health care law and its connection with the continuing resolution, the current debate is actually much larger than the Affordable Care Act (Obamacare). The cost of the health care law, originally estimated at $940 billion over 10 years when first passed, has ballooned to $1.93 trillion over the first decade of full implementation. With our national debt approaching $17 trillion, this massive law is but one symptom of our greater problem: unrestrained government spending.

The president has granted waivers for special interest groups and delayed portions of the law, including the employer mandate for big businesses. The House simply voted to ensure fairness for all Americans.

After all three bills were rejected by the Senate, the House passed yet another bill calling for the House and Senate to meet and negotiate an agreement on a continuing resolution and our nation’s debt issues. This approach is nothing new. In fact, 27 times over the past 40 years, the debt limit has been used to negotiate for spending reductions. However, the Senate tabled this request, too, and, along with the president, still refuses to discuss a path forward.

In the meantime, the House has focused on funding key portions of the federal government. Recently, I joined bipartisan coalitions of House members in voting to reopen the National Institutes of Health to ensure patients have access to clinical trials; fund critical services for veterans; reopen our national parks; provide funds for disaster relief efforts; and ensure our service men and women are paid. The House will continue to fund key departments and operations as we await a full debate on our spending and debt.

The current impasse will only end when responsible members of both parties come together to address our larger spending issues. I stand ready and willing to have this conversation and move our country forward. But to do that, there must be willing partners sitting across the table. You cannot negotiate alone.

(Congressman Joe Heck represents Nevada’s 3rd District in the House of Representatives.  This op-ed was originally published by the Las Vegas Sun on October 10, 2013.)