(Chuck Muth) – Eight of the nine Republican candidates vying for the GOP nomination for governor participated in a debate Thursday night in Reno.  I didn’t watch the debate live.  I’ll wait for the edited version to come out next week.  But based on news and social media reports I’ve read, here are some observations and an adjustment to my odds (originally posted here). Joe Lombardo didn’t participate.  Some think this hurts him; others think it was a smart move since he’s the clear front-runner at this point. I mean, why would he subject himself to the ranting and ramblings of low-tier candidates who don’t have a prayer in the race? But also, Lombardo has said that he WILL participate in debates, but not until after the close of filing.  Which makes sense.  A number of the current field of candidates might very well never even make it to the starting gate once filing opens. It appears Joey Gilbert was the winner.  His applause lines clearly resonated with the audience.  Lines like this one on the education question…      “Vouchers is how we fix this, and working with these teachers’ unions, and if they don’t want to step up and back the teachers, let’s decertify them.” His supporters are passionate.  And he’s grabbed the “fighting conservative” baton from Michele Fiore. John Lee appears to have helped himself.  I did notice that his social media posts improved significantly throughout the day and during the debate. This was Guy Nohra’s first public debate as a first-time candidate.  He didn’t hurt himself, but neither did he separate himself much from the pack.  But it’s still early.  Don’t count him out. Dean Heller hurt himself badly. First, he went out of his way multiple times to claim he’d spoken with Donald Trump earlier in the day, clearly trying to play the “Trump card.”  Audience didn’t buy it.  Media reports he was booed.  To which Heller responded…      “They know who’s in front in this race and they’re gonna boo the frontrunner at every chance they get.” No, they boo a known and undeniable Never Trumper every chance they get. Heller also falsely claimed that Las Vegas was a “sanctuary city” and compared it to…Guatemala?  Yeah, lots of people get that comparison. He also touted his endorsement of the state police union, stating that “they will never have to wonder what side I’m on.”  Yeah, right.  His campaign mascot isn’t a wind sock for nothing.  Remember his major league flip-flopping on repealing ObamaCare? 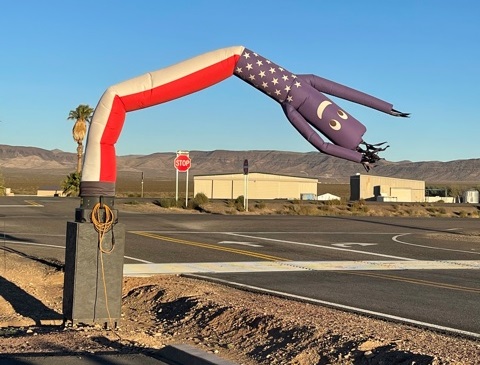 And according to reporter Tabitha Mueller, on the question of abortion Heller said “he will never change his position.”  But, um, he has.   While maintaining he’s pro-life now, in a Las Vegas Review-Journal story back in 2006, Heller said, “I do back a woman’s right to choose abortion. It is the conservative position.” Mueller also reports that when Heller claimed to be the “only proven conservative in this race,” the crowd “groaned.”  Sam Metz of the Associated press reports that the audience “laughed.” And when asked what his #1 qualification for being governor was, Heller responded: “What matters most is that I’m a father, a husband and a grandfather.” What?  There are homeless people, violent criminals and Democrats who are fathers, husbands and grandfathers.  Does that make THEM qualified to be governor? Fiore engaged in her usual political theater.  But the shine seems off the apple, with Gilbert stealing her thunder.  And she knows it. After Gilbert noted his efforts in the courts to knock down Democrat Gov. Steve Sisolak’s “emergency” shutdown orders and mandates, Fiore asked in her patented condescending tone…      “Joey, Joey, how many have you won?” Gilbert’s response: “Only one.” But here’s the thing: It’s one more than Fiore has!  Or any of the other candidates.  At least Gilbert’s been in the arena fighting since Day One.  And Republicans know it.  And Republicans appreciate it. Barak Zilberberg posited the notion of applying a QR code to the “will work for food” guys and create “homeless patrols” to make sure they pay taxes on the donations they receive.  What a ‘shroom. He also called Fiore a RINO (Republican in Name Only).  Now, there’s a lot of things you can call Michele, but “RINO” sure as heck ain’t one of ‘em.  Lastly, I was struck by the answers to this question, as reported by Mueller:      “If the majority of your constituents would like you to vote a certain way but if in your heart and mind you want to vote a different way, how would you vote?” Multiple candidates reportedly responded with some variation of “you vote with your constituency.”  Um… Even if your constituency wants you to vote to bring back slavery?  Are none of these candidates aware of that trap, which a state legislator fell into years ago? Anyway, based on the media reports and social media posts I’ve read, here are my updated odds for the 2022 Nevada Republican gubernatorial primary…

(Disclaimer: Odds are published for entertainment purposes only.  No wagering allowed – except for illegal side bets among friends or political adversaries.) This Just in from the CDC      The Center for Disease Control has issued a warning about a new virulent strain of this old disease!      The disease is called Gonorrhea Lectim. It’s pronounced “Gonna re-elect ’em”, and is capable of crippling our current population.      The disease is contracted through dangerous and high-risk behavior involving putting your cranium up your rectum. Many victims contracted it in 2020 when they elected Joe Biden and Liberal Progressives into power and are now starting to realize how destructive this sickness is.      It’s sad because Gonorrhea Lectim is easily cured with a new drug just coming on the market called Votemout. It’s pronounced “Vote-em-out.” It can be picked up at your local pharmacy without a doctor’s prescription.      You take the first dose now.  The second dose should be taken just before the 2022 elections, otherwise, Gonorrhea Lectim could eventually wipe out all life as we presently know it in the USA. (Original author unknown) Muth’s Truths Always a bridesmaid; never a bride. The Republican National Committee has reportedly narrowed it site section for the 2024 national convention to Milwaukee, Nashville, Pittsburgh and…Salt Lake City? How is SLC, in a solid red state, a better venue than LAS VEGAS, in a purple state?  And why in the world would the GOP reward the state that’s given us U.S. Sen. Mitt Romney?  Somebody seriously dropped the ball here. 7 Worst Habits of Highly Unelectable People

Register Now: Campaign Boot Camp! Campaign Boot Camp is unlike ANY political training program you’ve ever attended.  You’ll learn and discover things that simply aren’t taught in political science classes in colleges and universities (or anywhere else, for that matter), including…

Next Boot Camp:Saturday, January 15, 2022Las Vegas, Nevada Click here for more information FAMOUS LAST WORDS“Yesterday was a declaration of war on MAGA. It’s not going to happen; we’re going to hold them accountable. Their day is coming. We dare them to try to go to war with MAGA.” – Steve Bannon “On January 2, 2022, I was permanently suspended on #Twitter… I will NOT comply with communism and ask everyone to leave Twitter and take their power away.” – Rep. Marjorie Taylor Greene “Joe Rogan helps Twitter alternative GETTR amass a million new users.” – New York Post “I went on War Room today and said GETTR is like a high school reunion and a party cruise all rolled into one!” – Jack Posobiec