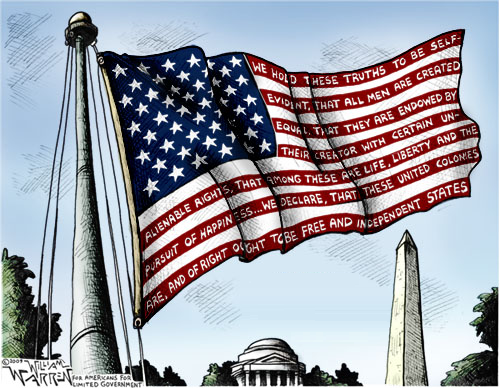 (Rick Manning for NetRightDaily.com) – “We hold these truths to be self-evident, that all men are created equal, that they are endowed by their Creator with certain unalienable Rights, that among these are Life, Liberty and the pursuit of Happiness.–That to secure these rights, Governments are instituted among Men, deriving their just powers from the consent of the governed.”

In these 54 words, Thomas Jefferson defined the DNA of America, and laid the foundation for individual freedom that has over the course of 239 years led to American Exceptionalism.

Yet, beyond the secular revolution of breaking away from the England, the American DNA was defined in the bold statement that individual rights were not granted by a government, but instead by God, and that the government itself was created to secure those rights.

This fundamental transformation away from the notion of the divine right of Kings to the subjugation of government to the people was based upon the core statement that “all men are created equal, that they are endowed by their Creator with certain unalienable Rights.”

Created equal, the rich and poor alike, all given dignity by God with rights that no government could strip away.

A freedom like no other that has ignited Americans to dream, strive, achieve, fail and get up and try again.

Being human, those authors of the Declaration were not perfect, but they chose not to be limited by their cultural or other short-comings.  Instead, they chose to set a bar high enough that Americans would always strive to achieve it, and peoples from other countries would always crave to join it.

Today we find the same underlying challenges that faced those brave men who met in Philadelphia in 1776 facing our nation.

Today, there are those who look at the faults of our nation and seek to use them to deny the underlying truths that have made America the envy of the world.

They seek to return our nation to one where natural rights are not endowed by God, but rather reduced to those which the federal government allows us to pretend that we have.

They seek to turn the meaning of the Constitutionally enumerated freedoms upside down.  One example is their attempt to turn the First Amendment on its head.  Flipping its plain meaning from the right to engage in speech, the free exercise of religion, redressing grievances to the government and of the press to a government imposed protection from these very activities under the guise that some sub-group or even the majority might be offended.

Many of the same people who defended the right of miscreants to burn the American flag, now argue that the American flag should be torn from the flag pole as it offends some who come from other cultures. They argue that the government should act to stop the free exercise of religion by virtue of declaring contrary points of view to be “hate speech.”  They argue for the government to impose a personal freedom from being exposed to ideas that they disagree with, so they can maintain a safe zone bubble.

Rather than the free exchanges of ideas that have helped America grow strong, they want a government imposed monopoly of ideas that coincides with their limited understanding of the world.

This is the battle that America has just begun to wake up to.  A national discussion that goes to the root of who we will be in the future, and those whose base argument is that government determines what rights individuals have naturally are trying to silence those who believe that individual freedoms are protected from the government rather than defined by it.

The idea of America is freedom to do, speak and take action without the shackles of a federal government overlord is at risk.  The underlying, guiding assumption of our nation’s history that the government did not bestow rights, so the government cannot take them away is being challenged.

This very revolutionary concept that has brought our nation to being the greatest the world has ever known is in imminent danger.  Should we, as a people, accede to those who wish to rule us by agreeing with their premise that rights are fungible and the government is the grantor of whatever freedom it chooses to allow, America will no longer be exceptional or unique.  Our nation will slip back into the norm of history, being ruled without rights with the people taking whatever crumbs that fall out of our master’s hands rather than striving for their own dreams.

This is why I have joined with others in celebrating July as America Proud month.  A month dedicated to educating and discussing those God-given freedoms that make our nation unique, and American Exceptionalism real.

A version of this column was originally published at NetRightDaily.com, a project of Americans for Limited Government. NetRightDaily.com, launched in August of 2008, offers liberty-minded thought on the federal government as well as the threats that exist to individual liberty at all levels of government.