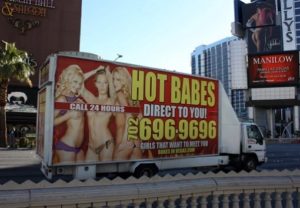 About the worst thing you can do when it comes to the horrific crime of sex trafficking – especially of underage girls – is to trivialize it through absurdity.  Yet that’s exactly what the National Center on Sexual Exploitation (NCSE), formerly “Morality in Media,” did earlier this month.

As reported in a February 11 article published by the Las Vegas Review-Journal, NCSE named the State of Nevada to its annual “Dirty Dozen” list of “major, mainstream facilitators of sexual exploitation” – along with American corporate icons such as Amazon, Google, HBO, Netflix, Twitter, Sports Illustrated and even United Airlines.

Now, think about what this Washington, DC group is saying…

If you search Google for a recipe for Hungarian goulash, you’re facilitating sexual exploitation.  If you order a book on gardening from Amazon, you’re aiding and abetting sex trafficking.  If you watch HBO or Netflix, you’re an accessory to sex crimes.

Indeed, if you tweet about a story you read in Sports Illustrated on Major League Baseball’s spring training camps while flying on United Airlines to a Bible convention in Alabama, you’re all but a street “pimp.”

And according to NCSE, Nevada was added to its list because “legalized prostitution in Nevada’s rural counties has turned the state into a ‘magnet for sex traffickers and prostitution tourists.’”

The closest legal brothels to Las Vegas – arguably Ground Zero for illegal prostitution and sex trafficking – are an hour and a half away.  And because of extremely strict licensing and regulatory oversight of those legal brothels, there are no underage girls working in them and no one is working there against their will.

Sex trafficking in Nevada’s rural counties is all but non-existent.

On the other hand, Las Vegas is awash with gentleman’s clubs, nudie bars, escort services, massage parlors, “girls to your room” in luxurious Strip resorts, adult sex shops, and good old-fashioned slam-bam-thank-you-ma’am in the back seat of cars behind convenience stores and in seedy motels.

Yet NCSE doesn’t talk about THAT.

Instead it focuses on Nevada’s legal rural brothels which prohibit underage girls from working in the trade, keeps the consenting women who work there safe, protects the public through weekly health exams for sexually transmitted diseases, and contribute significant tax revenue and charitable donations to the communities where they’re located.

NCSE’s linking of Nevada’s legal rural brothels to the illegal sex market in Las Vegas is like comparing a car that needs a quart of oil and a carwash to one with four flat tires, a busted windshield, a smashed bumper, a blown engine and a cigarette lighter that doesn’t work.

Where are your priorities, people?

Or think of it this way: To claim that Nevada’s legal rural brothels are a “magnet for sex traffickers” is like saying legal pharmacies such as Walgreens and CVS are magnets for illegal drug traffickers.  We’re talking apples and oranges here, folks.

In naming Nevada to its “ignominious” list, NCSE cites a Lyon County Sheriff’s Department audit of its four legal brothels last fall that purportedly found “signs of potential sex trafficking” – while failing to note that audit report was generated by the local sheriff who was secretly funding a ballot question to ban legal brothels in part because his ex-wife had gone to work for one.

Nevertheless, Lyon County voters – not wanting the crime and disease rampant in Las Vegas’ illegal sex market – defeated the ballot question by a whopping 80-20% margin.  Leading NCSE to accuse “Lyon County residents who voted against the brothel ban” of being “complicit in the sexual exploitation of ‘countless women.’”

Hogwash.  And how insulting.

The adult women who work in Nevada’s legal brothels are business women and entrepreneurs who have chosen such sex work of their own free will – even though that’s not a career choice many others would make.

They’re not the problem; they’re part of the solution.  The anti-Nevada puritans at NCSE should get off their backs.  Live and let live.