BLM says move will save taxpayers millions
The Center Square

BLM says move will save taxpayers millions, but environmental groups bristle at decision 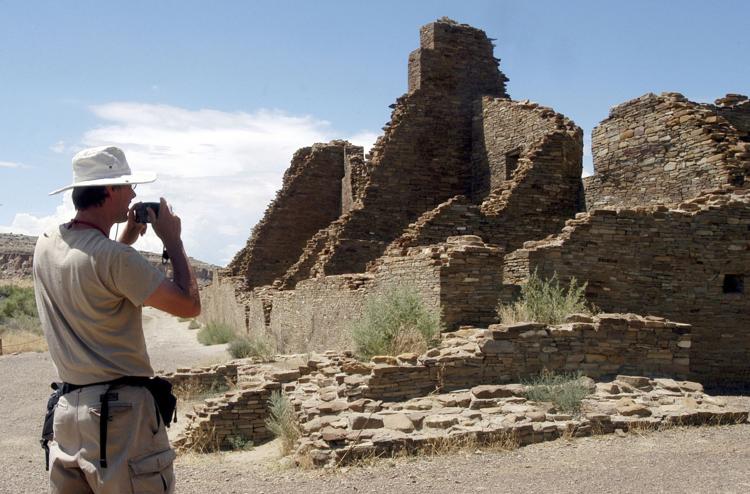 In this Aug. 10, 2005, file photo, tourist Chris Farthing from Suffolks County, England, takes a picture while visiting Chaco Culture National Historical Park in northwestern New Mexico. The Trump administration says it can save taxpayers millions of dollars and trim a “top heavy” office in Washington by moving the Bureau of Land Management headquarters to Colorado and dispersing scores of jobs across 11 Western states. Administration officials said Tuesday, July 16, 2019, that they hope to open the new headquarters in the town of Grand Junction and complete most of the job shifts by September 2020.
AP Photo/Jeff Geissler

(Derek Draplin) – A U.S. Bureau of Land Management (BLM) official said this week that the planned relocation of its headquarters from Washington, D.C. to Grand Junction, Colo., will save taxpayers at least $50 million.

The move, confirmed on Monday by U.S. Sen. Cory Gardner, R-Colorado, isn’t without its critics though.

Some environmental groups oppose the relocation plan, arguing that it will degrade the bureau’s influence by moving officials away from their supervisors in the U.S. Department of the Interior.

Proponents argue moving the bureau headquarters will allow for more effective resource management and save taxpayer dollars in the long run.

Balash said 222 positions would be moved to various states out west, with 85 positions – including the BLM director – relocating to Colorado. Of those positions, 27 would work in the new headquarters in Grand Junction, a town of  63,374 on Colorado’s Western Slope.

The bureau manages public land and natural resources on 245 million acres, most of which is out west. It also manages livestock grazing and wild horse and burro programs in several western states.

“Relocations will improve the BLM’s headquarters operations on a state-by-state basis and will enhance coordination with its constituencies,” Balash wrote.

Balash told reporters that the relocation will save $50 million to $100 million over the next 20 years, citing office rental costs and cost of living.

The letter also noted that in 2018 alone, travel expenses totaled $3.3 million for BLM employees to travel from Washington, D.C. to western states.

The relocation is expected to cost over $5 million and be completed by Oct. 1.

Environmental groups are skeptical of the relocation, saying it’s a political move.

“With conflict-ridden ex-mega lobbyist David Bernhardt running the show at Interior, motives behind this move are dubious at best,” he said. “Bernhardt and his team of political cronies have proven over and over again that their preset agenda focuses on sweetheart deals for industry and special interests at the expense of our nation’s public lands.”

Bernhardt is a native of Rifle, Colo., located on the state’s Western Slope.

“BLM already has 95 percent of its personnel out West,” the organization said on its Facebook page. “Maintaining an appropriate presence in the Nation’s Capital is essential to conduct typical HQ functions. Only three Federal agencies have their HQs outside of the D.C. area, and most companies and organizations have offices or representatives in the D.C. area for good reasons.”

Others criticized the number of federal employees being relocated to the headquarters in Grand Junction.

“This isn’t an effort to move the Bureau of Land Management headquarters, it’s an attempt to dismantle it altogether,” said Jennifer Rokala, executive director of the Center for Western Priorities. “While only a couple dozen people will be sent to Grand Junction, nearly three hundred others will be scattered in offices throughout the West.”

Western Slope lawmakers praised the relocation plan this week, saying it will benefit economic development in Grand Junction and the surrounding communities.

“Primarily it puts us on an elevated scale with other larger cities around the country and hopefully draws additional business’s and attention to lift our economy and gives us some diversification which we have needed for many years,” he said.

Mesa County Commissioner Rose Pugliese told The Center Square that it’s important for federal decision makers to be closer to where their decisions are made.

“Having those decision makers in our communities will be really important so that they understand the impact of their decisions,” she said.