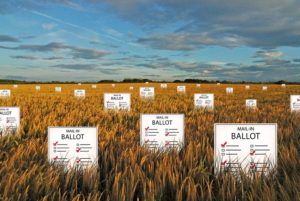 (Chuck Muth) – Democrats all across the nation are trying to use the Wuhan Virus crisis to change in-person elections to all-mail balloting – including here in Nevada.

This ain’t good for a lot of reasons, not the least of which is this from Timothy Sandefur, Vice President for Litigation at the Goldwater Institute…

“If the history of democracy teaches us anything, it is that suddenly changing the rules of an election in the midst of a crisis – especially by the decree of a single official – is a terrible idea.

“Emergencies are times when people are least likely to dispassionately weigh the long-term costs of benefits of their actions, and the whole purpose of constitutional rules is to keep people from making bad decisions in the heat of the moment. Breaking those rules can inflict permanent damage on democratic government.”

In addition, the potential for fraud and voter disenfranchisement due to mailed ballots not reaching their destination is huge.

Republican Gov. Doug Ducey, of next-door-neighbor Arizona, this week slammed the door on moving his August primary to an all-mail election, declaring: “We’re not going to disenfranchise anyone from voting (in person) on Election Day.”

Ducey noted that voters have the OPTION of requesting a mail-in ballot if they so choose for whatever reason, including worries about the Wu-Flu.

But perhaps the greatest threat of this is the Democrats’ effort to allow “ballot harvesting.”

Ballot harvesting is where someone goes around – say, to a seniors center or union hall – and collects all the mail-in ballots they can get their hands on and then delivers them to the election department.

They did this in California in 2018 and it definitely cost some Republicans their races.  An Orange County election official noted that ballot harvesters were showing up with batches of 100 and 200 ballots at a time.

The problem with this is at least two-fold…

1.)  There’s no “chain of custody” control.  What’s to stop the ballot harvester from tossing any ballots they think might be for a candidate other than their preferred candidate?

2.)  There’s huge potential for coercion and intimidation by ballot harvesters trying to get people to vote for certain candidates…or else!

By law, ballot harvesting is illegal in Nevada.  No one other than an immediate family member is allowed to submit another person’s ballot.

But the Nevada Democrat Party has threatened to sue the Secretary of State unless she agrees not to prosecute anyone for ballot harvesting.

They’re also demanding, among other things, additional in-person voting sites, even though the whole stated purpose of switching to an all-mail election was to mitigate the chance of someone getting the Wu-Flu while voting.

Oh, and they want ballots mailed to inactive voters (voters who no longer live at the address where they registered), and don’t want election officials verifying that the signatures on ballots match the voter registration signatures on file.

While I disagree with the Secretary of State’s decision to switch Nevada to an all-mail primary election, I’m happy to report they told the D’s to pound sand over these demands.

Meanwhile, the Democrats “Vote By Mail” (VBM) effort in New Mexico was stopped cold Tuesday night when the state’s Supreme Court ruled that the Secretary of State could NOT order an all-mail election for its June primary; that such a re-writing of election law had to be done by the Legislature, not the courts or the SoS.

This was a tremendous victory for election integrity, spearheaded by a grassroots organization called True the Vote.

Longtime supporters of Citizen Outreach may recall when TTV’s Anita Moncrief came to Vegas and spoke at our First Friday Happy Hour back in 2011.  So TTV is no stranger to us.

And now they want to come to here and file a similar class action lawsuit to block Nevada’s planned all-mail primary election which was ordered without approval of the Legislature.

“If you are facing this in your state and are fighting back, True The Vote will have your back,” TTV’s Catherine Engelbrecht told Breitbart News.  “We’re headed to Nevada next, where a similar situation is in play, and we’re going to stop it there too.”

Yesterday I helped them line up a dozen potential plaintiffs from across the state.  Lawyers are prepping the case.

With any luck, Nevada voters will enjoy the same success New Mexico did Tuesday night.

“While the (Wuhan virus) crisis is far from over in the U.S. … the doomsday scenarios that were predicted just two weeks ago have not come to pass.” – Associated Press, 4/15/20