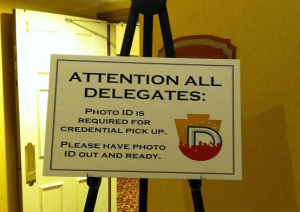 (Ryan Hamilton) – When Barack Obama was scheduled to speak at Bank of America Field at the Democratic National Convention in Charlotte this year, they planned on bussing people in from as far away as Atlanta to see the president deliver his address.

College students from across North Carolina and historically black churches in South Carolina, among other groups, would be provided with free transportation – courtesy of the Democratic Party – to and from the convention to fill the seats and show their support for the president. Curiously, one of the requirements to participate in this show of political support was a government issued form of identification.

A requirement of this sort is not particularly unusual – in order to operate a motor vehicle one must carry a driver’s license, which is a form of government-issued identification. One also needs this type of identification to board a plane and, in many cases, to validate credit card ownership.

Identification is often required to buy cigarettes or alcohol, or to enter bars or other social venues. One needs identification to sign a lease or to get a document notarized. In fact, if one tries to pick up registered mail, they’ll likely be asked for identification.

It’s not unusual that the Democratic Party, then, would ask the folks who wanted to come see the president deliver his speech to show some ID. That’s not curious at all. What is curious is that they continue to ask folks for ID to see the president in spite of their official opposition to laws that would require registered voters to produce identification before being issued an official ballot. In other words, Democrats do not think one should have to prove they are the voter they say they are before casting a ballot.

The NAACP agrees with the Democratic Party on this, arguing that these sorts of laws would be racially discriminatory because ethnic and racial minorities are less likely to have government issued ID. But that didn’t stop the NAACP from requiring identification to see Joe Biden or Mitt Romney address their convention.

The ubiquity of confirming one’s identification is without question – so necessary is it to live in the modern world that few individuals leave their house without their identification, ever. Apparently, though, Democrats and the Justice Department think that a routine credit card purchase should have more scrutiny than casting a ballot.

It’s easy to see the hypocrisy. Democrats only oppose identification requirements at the ballot box for two reasons. First, because the voters who lack identification (this number must be so infinitesimal that it doesn’t warrant serious discussion) are significantly more likely to vote Democrat, and/or second, because Democrats are more likely to benefit from voter fraud and illegally cast votes by non-citizens and felons.

How can I believe that, one might ask? It’s easy to see: When the stakes aren’t electoral, Democrats suddenly forget the plight of the poor and minorities who cannot get a document notarized or drive a car – anyone’s car, even for just a day. These same people – who number enough to warrant an investigation into Texas and Pennsylvania by the Justice Department – can’t sign a lease or get a legal document notarized. Those things, which are surely hugely more important and relevant in the everyday life and concerns of poor and minority citizens, are denied to them the 364 days a year that aren’t election day.

If there were any sincerity in the objections Democrats raise to laws meant to make it more difficult to commit voter fraud, then they should start by making it easier for people without identification to live in everyday life by passing laws that forbid identification checks for credit card purchases, traffic stops and so on. But I suspect the huge number of responsible citizens – the ones with identification – would start to get upset when identity fraud became a massive problem. They wouldn’t tolerate that nonsense for very long.

So what is the solution? We live in a country that put a man on the moon, but we can’t have some real talk about solving issues of voter fraud and making sure everyone who wants access has access to the polls? Well, here’s an idea: Start by making identification free. The Republican law in Pennsylvania requiring ID at the polling place has a provision which allows individuals to obtain photo identification from the Pennsylvania Department of Transportation free of charge.

The Supreme Court has confirmed that this is a reasonable protection against voter fraud in a case that challenged Indiana’s photo identification requirements. Justice John Paul Stevens, widely known as one of the modern court’s foremost liberals, wrote the opinion: “Because Indiana’s [photo ID] cards are free, the inconvenience of going to the Bureau of Motor Vehicles, gathering required documents and posing for a photograph does not qualify as a substantial burden on most voters’ right to vote, or represent a significant increase over the usual burdens of voting.”

This is an issue of settled law — so why then is the Justice Department investigating Pennsylania’s law, which is more or less identical to Indiana’s? It is because it is the same strategy used in nearly every issue by Democrats: Demagogue the hell out of it. Shout “racist!” and “classist!” and “sexist!” as loud as you can, regardless of the facts. People become so preoccupied with denying that they are racist or waging a war on the poor and women that the discussion moves away from the legitimate point, counterpoint of the law.

It doesn’t matter that, in these instances, Republicans have both made voter fraud harder to commit and given the poor in Indiana and Pennsylvania an opportunity Democrats never did by offering them government issued photo identification at no cost, so they can live in the modern world without the hugely significant and everyday burden of going without identification which they may not have been previously able to afford.

Being able to open a bank account and sign a lease and pick up their mail must surely count for a much larger relief to those Americans so poor they can’t afford the cost of photo identification than ensuring that they do not need identification one day a year to vote.

That doesn’t matter. What matters is that all Republicans are racists and these laws, which extend a further level of inclusion and franchise to those who did not previously have it while securing our electoral process, bizarrely substantiate that accusation.

There’s only one other place where this kind of thinking makes sense: Oceania.