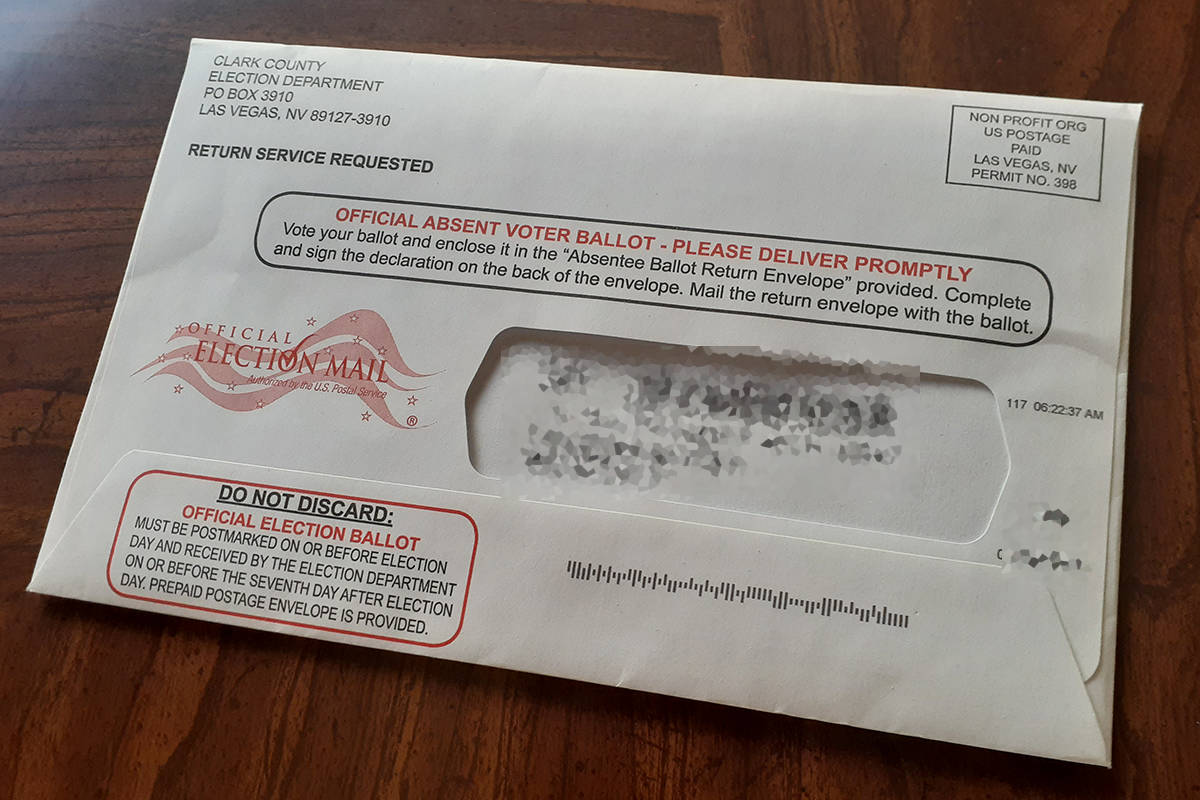 “All evidence shows that Nevada’s election was fair, safe, and secure, and time and again, the Court has agreed.”

Secondly… “all evidence”?  Not even remotely true.  Consider…

That race was “won” by Democrat Ross Miller over Republican Stavros Anthony by 10 votes out of over 150,000 cast in the initial count.  But then the EVIDENCE that the race was NOT “fair, safe and secure” emerged.

That evidence wasn’t provided by the Trump campaign or conspiratorial rightwing activists, but from the actual Clark County Registrar of Voters himself, Joe Gloria.

Mr. Gloria reported to the Commission that his office had identified 936 county-wide “discrepancies that we can’t explain” in the counting; the vast majority of which, 710, came from mail-in ballots.

That 76% of self-reported discrepancies by the Registrar’s office came from mail-in ballots is, you know, “evidence” that the quickly-ordered all-mail balloting posed significantly more problems than traditional in-person voting.

Again, that’s not according to the Trump campaign or right-wing conspiracy theorists; it’s from the county’s top election official.

The Registrar’s office also self-reported that “Six voters have been identified who voted twice in this election.”

So much for pre-election assurances that safeguards were in place to prevent that from happening.

Mr. Gloria proceeded to note that in the 2016 presidential election – which was NOT an all-mail election – only four discrepancies were identified by his office.  But in the 2020 election they discovered 936 – a staggering increase of over 23,000%!

And that’s NOT a fatally flawed election?

In other words, the hastily-ordered all-mail election – approved last August by the Democrat-controlled Legislature less than 100 days before the election – was deeply flawed.  Once again, not according to Trump supporters or rightwing conspiracy theorists, but by the Registrar of Voters himself.

That’s “evidence” that the 2020 election was anything but “fair, safe and secure.”

But wait.  It gets worse…

Mr. Gloria went on to note that 2,243 “provisional” ballots were rejected, including “115 (that) had already voted in the election, 142 (that) voted in the wrong district or precinct, 8 (that) were not eligible to vote, 1,925 (that) were not registered to vote, and 53 (that) did not provide adequate proof of residence or identification.”

In other words, the system was broken.

That the Registrar’s office caught these irregularities doesn’t change the fact that they occurred.  And how many more examples are out there that election officials missed or ignored?

In trying to explain the discrepancies that Mr. Gloria said couldn’t be explained, Mary-Ann Miller of the District Attorney’s office testified that…

“If somebody fails to actually sign in, but is then led to a voter machine and votes, then that precinct is going to be off by one vote.”

Wait.  If someone fails to check in and have their signature verified by a poll worker before being given their voting card to access the machine, how did they VOTE?  Sounds to me like another serious flaw in the security process.

Mr. Gloria went on to note that his office had identified 139 “discrepancies that we can’t explain” in the Commission C race that was decided by 10 votes.

“I don’t think,” Ms. Miller informed commissioners, “because of the nature of the discrepancies, that any court presented with these discrepancies would be comfortable saying that the results really reflect the will of the voters in Commission C.”

Continuing, Ms. Miller informed commissioners that “you do have authority to declare that there’s enough concerns about an election in a particular race that you won’t certify the results…”

Which the Commission did by a vote of 6-1, with Commissioner Justin Jones being the lone dissent.

Commissioner Jim Gibson, a decided voice of reason during the hearing, said “it’s disappointing that there have been things like the ones that are described,” adding, “I imagine there are other things that have happened.”

What we know right now is only what the election department has self-reported.  We haven’t even gotten to the issues of…

There’s more than enough evidence – as presented by the Registrar and the District Attorney’s office, not rightwing conspiracy theorists – to call into question the integrity of the Clark County election system in 2020.

As such, a judge should order a complete and thorough audit of the ballots, including an independent review of every mail-in ballot/envelope, to assess the accuracy of the signature verification determinations.

Additionally, Mr. Gloria should be compelled to provide full and transparent access to those envelope signatures and testify, under oath, about the entire election process and how it was handled or mishandled by his office.

Not just for Donald Trump.  Or for Stavros Anthony.  Or for the other races in Clark County, especially those that were decided by close margins this year.

But for FUTURE elections.

Nevadans should never be subjected to another election without sufficient procedural safeguards to protect against the blizzard of “discrepancies that we can’t explain,” as well as other administrative irregularities.

It’s not so much that this election was fraud as it was flawed.  Irreconcilably.  As such, no one can be sure the true will of the voters is reflected in the reported results.  The courts need to step in and fix this – even if it means all new elections.

“Because of the slipshod nature of some local election systems, you can’t tell where the incompetence ends and the fraud begins.” – Stephen Moore

“IF GOP legal efforts are successful at identifying instances of voter irregularities or highlighting election procedures that invite abuse, they will not be for naught.” – Las Vegas Review-Journal editorial

“You don’t hear them denying there was widespread voter fraud.  They deny that we can prove it.” – Ron Coleman

“Fraud ALWAYS happens when you have this setup: 1) Lots to gain by cheating, 2) Cheating is feasible, and 3) Lots of people involved (so you know some crooks are in the mix). That describes our election system.” – Scott Adams