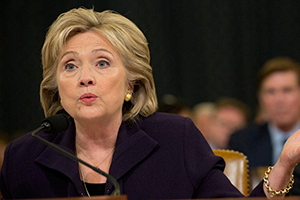 (Newt Gingrich) – For people who say there is nothing left for the public to learn about Hillary Clinton’s emails or her actions surrounding the Benghazi terror attacks, Democrats on the House select committee spent an awful lot of timeThursday attacking colleagues who asked reasonable questions. And Secretary Clinton spent an awful lot of time filibustering to run out the clock.

Little more than a week after Clinton said in a presidential debate that the enemy she was proudest of is “probably the Republicans”, she, the media, and allies in her party tried their hardest to portray the hearing as nothing more than a partisan Republican charade.

Evidently they did not see “partisan” motives in Democrats questioning the Secretary like they were her team of defense attorneys, or in their personal attacks on Republican committee members in place of questions for Hillary, or in the repeated complaints about the committee’s very existence. (The committee, of course, was created when Congress discovered that the Obama administration had failed to produce relevant documents in defiance of a Congressional request.)

Only one Democrat, Tammy Duckworth, even bothered to ask real questions about the attack that left four Americans dead or the administration’s response to it.

As Hillary grinned in agreement, Adam Smith, a leading Democrat on the committee, used one of his entire rounds of questioning to complain that the public had learned “nothing new” during the hearing. This was a quite a grievance from someone who spent the entire day trying to debunk the effort to learn anything new. And no doubt we would know even less if Congressman Smith and Secretary Clinton had their way.

If he had listened to the questions of his professional colleagues, Mr. Smith might have noticed that the public did learn some significant information Thursday.

Congressman Jim Jordan revealed in his questioning that Secretary Clinton knew the night of the attack that the violence was planned and carried out by a terrorist group. She wrote it in an email to her family.

Then we learned that the next day she told the Egyptian Prime Minister, “We know that the attack in Libya had nothing to do with the film…It was a planned attack – not a protest.”

In other words, Secretary Clinton’s email and phone records immediately after attack directly contradict the statements she made to victims’ family members days later, and the statements many members of the Obama administration continued to make for weeks.

Secretary Clinton has repeatedly blamed “the fog of war” for the false information she helped spread about the source of the attacks.

The documents we learned about yesterday prove that she (and very likely other senior administration officials) were not nearly as confused as they led the public to believe.

It is remarkable that the Democrats on the committee were so completely uninterested in the discrepancy between what the administration knew and what it said publicly that they neglected to ask even a single question about the subject.

It is even more remarkable that the news media shows every sign of cooperating in this effort to paper over this new information.

We have a presidential candidate who began her career working for a Congressional committee examining Watergate, and we have a generation of journalists who supposedly idolize the writers who inspired that investigation.

Now respectively the subject and the reporters of equally serious questions of public trust, both insist there is nothing important to see here. And who’s partisan, again?