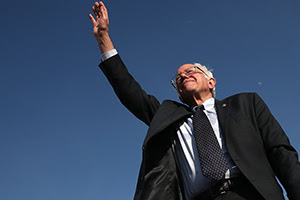 (Newt Gingrich) – It is time to take Bernie Sanders seriously. It is increasingly possible that the 73-year-old socialist from Vermont could be a real contender for the Democratic Party’s nomination for president.

For months, observers have scoffed at the idea.

Now we have a poll in New Hampshire which shows Sanders ahead of Hillary Clinton by 44 to 37.

Granted, New Hampshire is next to Vermont. Granted, it is only one poll.

In March, however, Sanders had 8 percent to Clinton’s 44 percent. Clinton appeared to be among the most inevitable nominees ever for a non-incumbent.

This is quite a turnaround.

Furthermore, in the same period that Sanders overtook Clinton in New Hampshire, we learned that Clinton had been subpoenaed and forced to turn her email server over to the FBI. The very stories of corruption, sloppiness, and arrogance which have been dragging down her campaign for months are guaranteed to continue. Every day there is another example of Clinton problems.

Sanders, however, is much more than simply the anti-Clinton candidate. This week he drew a crowd of more than 27,000 people in Los Angeles. That is extraordinary.

The reason has less to do with Clinton than with the large and growing left-wing of the Democratic Party which dislikes compromise, Wall Street, big money, and politics as usual. As Matt Bai reported in his brilliant book The Argument, the Democrats have a powerful anti-war, hard-line environmentalist, social activist wing that helped defeat Clinton in 2008.

Bernie Sanders is a genuine socialist and that makes his messages very clear and very direct.

Sanders also has been a practicing politician for a long time. As Mark Steyn has noted, Sanders has spent years building a political machine as a socialist without a party or a large interest group to back him.

As a student, Sanders was a member of the Young People’s Socialist League. He began running for public office more than 40 years ago. Finally, in 1981, he was elected mayor of Burlington, Vermont. As mayor of the state’s largest city he had a base on which to build his career. In 1990, he defeated a Republican to become Vermont’s lone congressman. Since Vermont has only one representative, the district is the same as a Senate seat. In 2006, after 16 years in the House, Sanders won the Senate seat.

This is a man who has been winning elections for 34 years. He is serious, energetic and determined.

He is also a good organizer.

As the Washington Post reports, he has been using the internet to build amazing crowds.

In three days he had 70,000 supporters show up in three west coast states, a long way from Vermont and New Hampshire.

He is doing all of this without spending much money.

And as Hillary Clinton gets weaker, he is getting stronger.

Everyone should realize that with six more months of Clinton corruption and confusion and six more months of pleasant, steady, and positive ideas from Bernie, the Democrats could easily find themselves on the edge of nominating a self-described socialist for President.

By then it may be too late for someone else to compete.

The last time this happened to the Democrats, they nominated George McGovern even though Hubert Humphrey and others tried to step in at the last minute.

The time to take Sanders seriously is now.