When you’re an outspoken, unapologetic Republican, expect the media to come after you with guns a’blazin’ no matter how thin the “evidence” is against you. 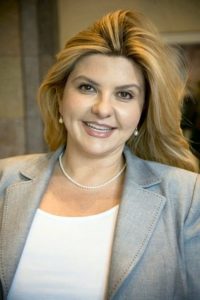 Sounds serious, right?  But when you read the actual story beyond the headline you learn…

The problem here, of course, is that too many people will read the “clickbait” headline and never get to the parts of the story that completely counter it.

And then there’s this…

While the article eventually demonstrates that the headline accusation that Fiore is a “domestic terrorist” is bull, it concludes by noting that “others were not impressed” with her efforts to bring a resolution to the standoff.

It quotes Annette Magnus, executive director of Battle Born Progress, as saying: “She’s not a hero.”

But Magnus is a Fiore Derangement Syndrome sufferer.  She’s the Maxine Waters of Nevada who’s been gunning for Fiore since Fiore’s days as an Assemblywoman in the Nevada Legislature.  So consider the source.

And in response to the “report,” a deranged, self-described “Grass rooted, tree hugging, dirt worshipper!” tweeted this outright lie yesterday…

“Now, can we get @VoteFiore out of office? She is considered a domestic terrorist.”

Whatever you do, please don’t click on this link and make a little Christmas donation to help Michele fight back against this latest witch hunt hoax.

Gunning for the “Hooker Heels” Judge

When I saw the headline this week that a pair of Las Vegas judges were being brought up on charges for posing a “threat of serious harm” due to “numerous allegations of judicial misconduct,” I took the headline seriously.

Then I read the article.

It turns out the judges, Amy Chelini and Melanie Andress-Tobiasson, pose no harm whatsoever to the public or even the justice system.

No, the only threat they pose is to a bunch of whiny government employees who think they, not the people we elected, should be running the show.

Among the “serious” charges brought by courthouse personnel against the judges is the “use of profanity off the bench,” which has been characterized as “flagrant” and “appalling.”

Indeed, according to the RJ article the prosecutor actually made a stink over a sweater Andress-Tobiasson once wore under her robe that was “emblazoned with a pair of cupcakes and the words ‘eat sh*t and die’” underneath.

A down-to-earth judge with a raw sense of humor?  I like it, I love it, gimme more of it!

Oh, I also heard Judge Melanie has been criticized for wearing “hooker heels” in the courthouse.

Seriously?  THAT’S what poses a “threat of serious harm” to the public?

“Judge Andress-Tobiasson is an active volunteer for the Trauma Intervention Program of Southern Nevada where she regularly responds to emergency and trauma scenes, including but not limited to, natural deaths, car accidents, suicides, drownings, fires etc. to assist family members, witnesses, and other bystanders directly on-scene, during the investigations.”

Not sure if she wears her “hooker heels” to emergency trauma scenes.

Anyway, it wasn’t until the end of the story that I found out what this is really all about: Judges – who, again, we elected – want to decide which clerks work for THEM in THEIR courtrooms.

THAT’S what the prosecutor calls “misconduct.”

There’s only one appropriate response to these entitled, self-appointed, self-serving bitchy little whiners…

Culinary Union Takes One in the Shorts

There were two seats open on the Las Vegas Stadium Authority board this week.  The Clark County Commission had three choices…

Reappoint Jan Jones, former Las Vegas Mayor and board member of Caesars Entertainment, one of the largest gaming companies on the planet…

Reappoint Tommy White, head of the Laborer’s Union, which was as responsible as anyone for bringing the stadium project to Las Vegas in the first place and is in the process of building it…

The Commission elected to stick with Jones and White.

Of course, Arguello-Kline’s Culinary Union threw a hissy fit and issued a statement berating commissioners for not supporting “diversity.”

They wanted the Commission to make an affirmative action pick of someone clearly nowhere near as qualified and accomplished as the other two far-superior candidates.

We should trust a $2 billion project to someone because of their…color?

He got into a Twitter spat with a fan who criticized him for not playing while out on an injury.  Jenkins responded to the fan: “I can only do my job.. retard.”

Oooooh, boy!  Now you done did it.

Had Jenkins gone with dumbass, dickweed, jerkface or assclown he’d have been fine.  But “retard” had snowflakes and social justice warriors clutching their pearls and hyper-ventilating.

Which, of course, was just stupid.  No one with an IQ above, say, Maxine Waters, thought Jenkins was dissing folks with mental disabilities. You’d have to be a retard to actually believe that.

As Jenkins himself put it after apologizing…

“You know the way I was raised, we got different cultures and different terms that you use. If I was to go out there and say, ‘Hey, you went retarded on the football field,’ would you look at it as me talking about somebody disabled or would you look at me saying, ‘Oh, he did some crazy stuff out there, some amazing stuff?’ It’s just a different term, and I feel like people just took it the wrong way.”

Exactly.  But the Giants dumped him anyway.  Over an innocuous tweet, not his performance on the field.

But the story does have a happy ending.

The Giants suck.  They’ve won only 3 games this year and are tied for last place.

On the other hand, the New Orleans Saints have won 11 games and won their division.

And the Saints picked up Jenkins.

So while the Giants are going home for the post-season, Jenkins is going to the playoffs.

Sometimes things just work out the way the universe intends.

“During this holiday season, we send our prayers to all members of the military serving overseas. Our nation is with you and thanks you for all the sacrifices you make to keep us safe!” – First Lady Melania Trump at Andrews Air Force Base on Friday