I Was WARNED Not to Say His Name
N&V Staff

(Chuck Muth) – I attended a candidate meet-and-greet last night at the home of Vicki Wille in Las Vegas that was hosted by the Nevada Firearms Coalition (NvFAC) PAC, the single most effective gun rights organization in the state. Very interesting evening to say the least.  To start… Ms. Wille is a gem.  Beautiful house.  Packed crowd.  And while talking with a judicial candidate – more on her in a minute – I looked up on the bookshelf and was immediately taken aback. One of the books – mixed in with all manner of conservative tomes – was “Art of the Pimp” by my friend, the late Dennis Hof, who won his State Assembly seat in 2018 despite being a prominent legal brothel owner and dying three weeks before the election. That’s not exactly a book you find on most conservatives’ bookshelves – other than mine.  But as it turns out, Ms. Wille was a big Hof supporter and she and I were at the big campaign rally in Pahrump for Dennis the night before he passed away.  Small world, huh?  Wait ‘til the end.  It gets smaller.  Back to the story… I sent an email out yesterday promoting the NvFAC event.  In response I got an email from one of my readers that included the following…      “Will Lombardo be there to explain why he doesn’t support gun rights?  Specifically, Constitutional Carry?”  He added in a subsequent email, “If you mention Lombardo’s name at the NvFAC, you’ll probably get booed off stage by the membership.” Not even close. Joe Lombardo is no Lord Voldemort (Harry Potter).  Or even Frau Blücher (Young Frankenstein).  For the record…      “Joe Lombardo is the only candidate in the race for governor who has carried a gun every day for the past three decades. As a lifetime member of the National Rifle Association, United States Army veteran, beat cop, and now as Sheriff for the past eight years, Joe knows that an important part of keeping our communities safe is protecting the Second Amendment from those who wish to erode or even outright repeal it.” Now, on constitutional carry… I spoke with Sheriff Lombardo about this issue this morning.  And as usual, there’s nuance to be considered.  It’s not that he doesn’t support constitutional carry.  He just thinks folks should be properly trained in firearms safety. A reasonable concern. Now, you may not agree with that position, but it hardly equates to “not supporting gun rights.”  He clearly does.  Steve Sisolak doesn’t.  It’s that simple. In addition, and for the record, NvFAC has endorsed Sheriff Joe in the governor’s race.  So not only didn’t I get “booed off stage,” everyone there (except the Libertarian candidate for governor) was firmly in Team Lombardo’s camp. That said, fellow conservatives… I get that Joe Lombardo wasn’t the most conservative candidate in the GOP primary.  And no, he’s certainly not as solid of a conservative as I and many of you.  Indeed, unlike the other top-tier candidates in the primary, Sheriff Joe has not signed the Taxpayer Protection Pledge – an issue, as you know, that is near and dear to my heart. However, he IS the most conservative candidate who can win in November…by a LONG shot. And while he hasn’t inked the Pledge, he’s assured me he won’t “pull a Sandoval” and raise taxes.  Yes, I know ex-Gov. Brian Sandoval said the same thing – before shoving the largest tax hike in state history down our throats.  So yes, it’s something we’ll need to watch and be vigilant on.  Just as gun rights supporters will need to keep an eye on THAT issue. Is Joe Lombardo a perfect movement conservative?  No.  Is he miles better than Sisolak?  Oh, hell yeah. Remember: Steve Sisolak’s people are who let the Luxor bomber escape.  Joe Lombardo’s people (METRO) are who caught him. And while some are bellyaching about having to choose between “the lesser of two evils,” even if you think Joe Lombardo is “evil” – he’s not – isn’t the only rational choice to choose the LESSER? Joe Lombardo won the primary – unsubstantiated claims to the contrary notwithstanding.  So it’s him or Sisolak…period.  I’m gonna “Go with Joe.”  You should, too. Onward… The NvFAC event also featured a “cattle call” of about a dozen candidates for various offices giving a short pitch for their campaign.  I’m not going to critique all the presentations – though many were awful. For example, one candidate – remember, he was speaking to a gun rights crowd – talked about his plan to run a pipeline sucking water from Lake Tahoe – seven hours away from Vegas – to Lake Mead to deal with Southern Nevada’s ongoing drought problem. Ugh. But another candidate – the one I referred to earlier – did something brilliant during her presentation. Anna Albertson (no relation to the grocery chain) is running for District Court judge in Department 11 against a Sisolak-appointed judge, Ellie Roohani.   And in her presentation, she handed out pre-printed postcards – standard-sized, not over-sized – with her info on the front and room for folks to add a hand-written note of support on the back for people to mail to friends, family, co-workers, etc. 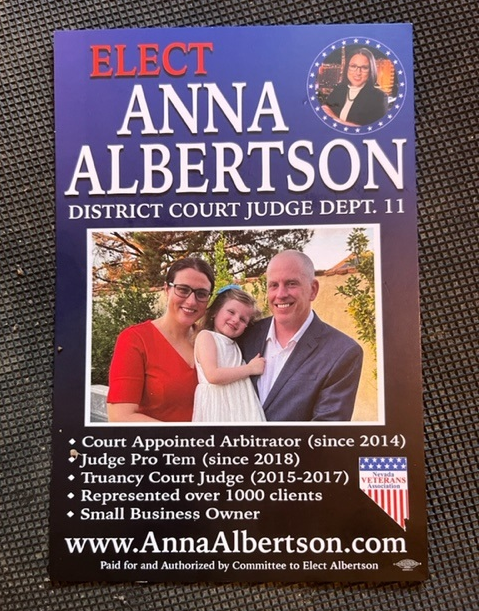 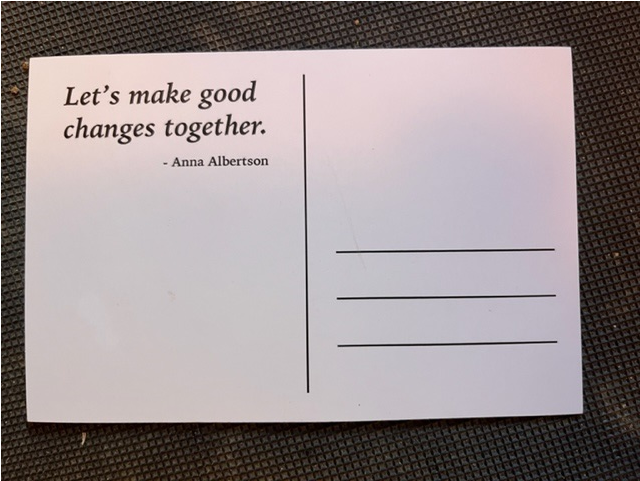 Now, THAT’S a great “call to action” – especially in a judicial race where so many voters know next to nothing about the candidates.  A personal postcard voicing support from someone the voter knows is FAR more effective than a postcard from the candidate herself or himself.  This is the difference between running a marketing campaign vs. running a political campaign.  Every conservative candidate on the ballot should “swipe” her idea. Wrapping up… After the event, NvFAC PAC’s lobbyist and longtime friend, Randi Thompson, and Citizen Outreach’s new Executive Director, Raven Omojola, and I headed to Atomic Liquors downtown for a bite to eat and few adult beverages. I only recently “discovered” this place and it’s quickly become a personal favorite – especially now that the weather has cooled down and you can sit outside on their deck.  And even more especially because of my new favorite bartender, Devin Costentine.  She…is…terrific. If you stop in, tell her I sent you and said hello. Anyway, I went to the bar to order drinks and a guy sitting there asked, “Are you Chuck Muth?” Turns out I am. It also turned out that he, Sam Barrett, is Sisolak’s campaign manager! We had a short, pleasant chat.  Nice guy.  We’re coaches on opposing teams, but that doesn’t mean we’re “enemies.”  I offered to buy him a drink but he had to run. I told you it’s a small world! And the beat goes on… Mini-Muth’s Truth In the race for Las Vegas City Council Ward 4, the choices in November are conservative Republican Bob Beers and tax-hiking RINO (Republican in Name Only) Frances Allen-Palenske.  The Culinary Union – representing hotel and casino workers – is essentially an arm of the Nevada Democrat Party. And the Culinary has endorsed Allen.  Tells conservatives all they need to know. FAMOUS LAST WORDS“So California wants to ban electric cars and now natural gas heaters.  I’d say they plan to run the state on unicorn farts, but thanks to the Green New Deal, flatulence is off the table.” – Rep. Lauren Boebert (R-CO) “So the old joke – that I just made up – still works: A politician, a liar, a spoiled child, a hypocrite, and a multi-millionaire walk into a bar. The bartender says, ‘What can I get you, Governor?’” – Jon Caldera “If even one vote has been illegally cast or if the integrity of just one election official is compromised, it diminishes faith in the process.” – U.S. Attorney Jennifer Arbittier Williams