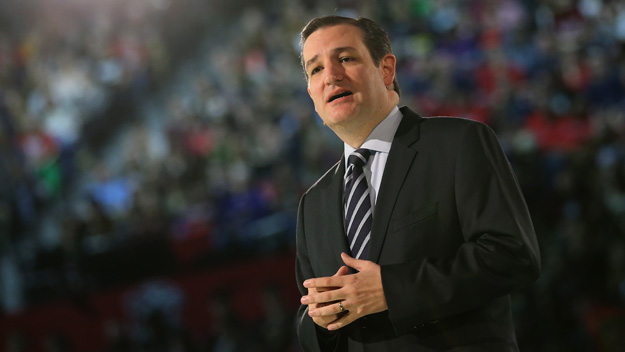 LYNCHBURG, VA – MARCH 23: U.S. Sen. Ted Cruz (R-TX) stands on stage while speaking to a crowd gathered at Liberty University to announce his presidential candidacy March 23, 2015 in Lynchburg, Virginia. Cruz officially announced his 2016 presidential campaign for the President of the United States during the event. (Photo by Mark Wilson/Getty Images)

(John Drogin of Make DC Listen) – Jack Welch, the world-renowned CEO, surprised people recently when he told Fox News that his choice for President in 2016 is Senator Ted Cruz.

His explanation was simple, yet profound. He said, “Ted Cruz says what he’s going to do, and he does it.”

This is EXACTLY why every American – Republicans, Independents, and even Democrats – should support Senator Cruz and his grassroots campaign.

Americans are ready for real leadership and we all need to get involved now and do something to help Senator Cruz win this historic race.

We need a president we can trust now more than ever. Our country is being destroyed by politicians who say one thing in the campaign, but then refuse to listen to Americans after they’re in Washington.

But Senator Cruz is different.

On every major issue, he has fought for the timeless American principles of limited government, a strong national defense, and traditional values.

When President Obama sought taxpayer funding to implement Obamacare (a law that most Americans strongly opposed), many Republicans ran for cover. Not Senator Cruz. He ran to the fight and did everything he could to stop it.

When President Obama pushed to raise the debt limit, many Republicans betrayed their principles and agreed to it. Not Senator Cruz. He opposed it and fought for real spending restraint.

When President Obama unlawfully granted executive amnesty to 5 million illegal immigrants, most Republicans agreed to fund it. Not Senator Cruz. He fought it even as members of his own party attacked him.

The choice is clear and now is the time to take action.

It’s time to put a proven conservative fighter in the White House, and we can do it if we work together.

Ted Cruz is the ONLY candidate for president who has stood up to the Washington Establishment and consistently fought for the principles of freedom that make this country so great.

He’s the only one.

The other candidates in this race are good people, but none of them have taken the arrows on the political battlefield like Ted Cruz.

Conservatives have a choice. We can sit back and let another establishment Republican win the nomination for President OR we can take action now and nominate someone we can trust.

This is our moment. This is our chance to take our country back and turn things around. And it could be our last chance.

Together, we can save this great country.

Mr. Drogin is Executive Director of Make DC Listen, a political action committee that helps elect bold, conservative leaders who will stand up to the Washington establishment and fight for the principles of freedom that make America great. Visit www.MakeDCListen.com to get more information.