(American for Tax Reform) – Washington, D.C. — Jeb Bush has enthusiastically endorsed a “grand bargain” tax increase with Democrats, says his father’s 1990 “Read My Lips” tax increase “created the spending restraint of the 90’s,” (false — see details below) and refuses to sign the Taxpayer Protection Pledge to the American people.

And today, as reported in a piece by The Daily Beast’s Tim Mak, the Jeb Bush camp refuses to even answer the question of whether Jeb will make any general statement promising not to raise taxes:

Pressed regarding Jeb Bush’s positions on taxes, his aides did not directly respond to a question about whether Jeb Bush might make a general promise to voters more broadly not to raise taxes.

As president, George W. Bush kept his tax promise to the American people.

George H.W. Bush, reflecting upon his “Read My Lips” tax hike, deemed it the greatest mistake of his presidency.

Regarding Jeb’s claim that the 1990 Read My Lips tax hike created spending restraint, let’s take a look at what actually happened: 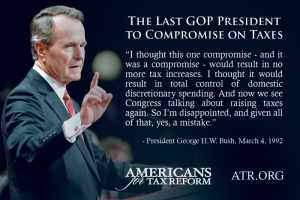 Starting in May of 1990, President George H.W. Bush huddled with Democrat House and Senate members at Andrews Air Force Base. 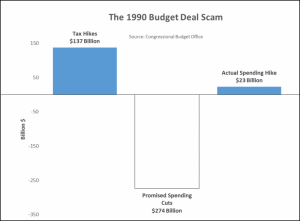 Americans for Tax Reform is a non-partisan coalition of taxpayers and taxpayer groups who oppose all tax increases. For more information, please contact John Kartch by email at jkartch@atr.org.