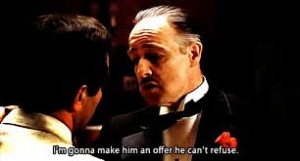 If someone stuck a gun to my head and instructed me to say, on video, that Nevada Gov. Brian Sandoval is the most conservative governor in the country and should be considered the best man for the 2016 Republican presidential nomination, I’d really have no choice but to repeat such ridiculous words.

Like in a hostage video…or one of those North Vietnamese POW propaganda films.

Similarly, Las Vegas Fire Chief William “Fast Willie” McDonald has been holding a gun to the head of American Medical Response (AMR) – a private ambulance service that’s been operating successfully in Las Vegas for decades – and two weeks ago reportedly made AMR an offer it couldn’t refuse.

But first, some background…

AMR has been operating its private ambulance service in Las Vegas for over fifty years.  For that privilege the company pays the city around $400,000 a year in “franchise fees.” The company earns its money from insurance companies and individuals for transporting people to the hospital.  The fire department, by contrast, costs taxpayers a bundle to provide the same service.

Which always reminds me of the old conservative saying that if you can find it in the Yellow Pages, the government probably shouldn’t be doing it.

Which brings us to a caveat: AMR provides medical transport service for things like heart attacks from reading your property tax bill; it does not provide rescue services – such as using the “jaws of life” to extract a victim from their car in an auto accident.  Rescue services are not what we’re talking about.

So here’s how things worked, quite well, in the old days…

Life-Saving Race to Your Place

Let’s say you’re having a cup of Maxwell House while reading the morning newspaper and suffer a mild stroke after reading that the City of Las Vegas actually wants to use millions of tax dollars to build a soccer stadium downtown.

After quickly checking online to make sure your life insurance is paid up, your spouse dials 911 and requests an ambulance.

The fire department takes the 911 call and dispatches both AMR and a taxpayer-funded ambulance to your house. That means two ambulances rush to your side, and whichever one gets there first immediately renders aid and stabilizes you.

Now, after you’re stabilized it only makes sense that the AMR ambulance would then transport you to the hospital so that the fire department ambulance crew – which, unlike the AMR folks, is capable of responding to the more serious types of rescue calls – is again available for service.

And this is where the problem lies…

Over the years, it’s made perfect sense for AMR to handle the bulk of hospital transports.  Until last March.  After the new fire chief came to town.

Fast Willie McDonald knows the way to San Jose – though it’s not likely he’d be welcomed with open arms if he goes.

Just a little over a year ago Josh Koehn of SanJoseInside.com wrote a column headlined, “San Jose Fire Chief Leaves for Las Vegas Amid Unanswered Questions.”  In it Koehn noted that Chief McDonald announced he was leaving San Jose just three days after announcing he was staying.

McDonald is said be a nice enough chap publicly, but one veteran San Jose firefighter quoted in the story said, “What he portrays of himself is absolutely the opposite of who he is behind closed doors and how he manages people. He’s a wolf in sheep’s clothing.”

McDonald’s San Jose tenure was also tainted by an “inability to properly report response times” and included accusations of “gender and religious discrimination, amongst other charges.”  Indeed, at the time of his departure a year ago for the greener pastures of Las Vegas, McDonald himself admitted that morale in his department was “very low.”

The Emperor Strikes Back

Under the pre-McDonald emergency medical response system, AMR was handling roughly 70 percent of the hospital transports and the fire department 30 percent.  McDonald, intent on swelling the amount of dough going into his taxpayer-funded department’s coffers, radically changed that system last March.

Under the new McDonald system, 911 operators stopped giving AMR automatic notifications of emergency calls.  Instead, fire department medics were dispatched to every call and AMR was notified only if the fire department thought they might be needed.

Don’t call us; we’ll call you.

But that’s not even the worst of it.

Last May, Jane Ann Morrison of the Las Vegas Review-Journal reported on a study conducted by the well-established/well-respected research firm Applied Analysis.  And that study showed that, during the month of March 2013, “in lower income areas, the Fire Department is reducing the number of hospital transport calls.”

Now why, you might ask, would the taxpayer-funded fire department blow off emergency calls to low income areas?

Indeed, it looks like the fire department had started cherry-picking emergency calls in middle- and upper-income areas and sloughing off the low-income, predominantly minority areas because it’s much harder to collect the transport fee from poor people without insurance.

According to an RJ editorial on May 15, 2014, Applied Analysis’ study looked at the demographics in two ZIP codes…

For his part, in response to the study, Fast Willie declared the claims “completely false” – even though he admitted that, um, he hadn’t actually, you know, read the study.

Is that a Horse’s Head in Your Bed?

Then on August 20, 2014, the RJ’s Morrison reported that “Las Vegas’ dual response system for emergency ambulances is dying.”

As such, instead of one ambulance from AMR and one ambulance from the city rushing to your aid in an emergency, “One or the other will be dispatched, not both.”  This, according to Morrison, “after more than a month’s negotiations between the department and AMR.”

Apparently Scott White, AMR’s general manager, woke up one morning with his prized stallion’s head lying next to him in a pool of blood (Google “The Godfather”).  Fast Willie appears to have made Mr. White a Corleonesque offer he couldn’t refuse.

The “agreement” – which clearly was “agreed to” under duress by AMR – is scheduled to be inked this week and presented to the Las Vegas City Council.  McDonald predicts the “compromise” will result in the fire department doubling the number of calls it gets to 60 or 65 percent, while simultaneously slicing AMR’s piece of the pie in half.

In other words, the fire department, with this “agreement,” gets the gold mine and AMR gets the shaft.

And make no mistake: This boost in fire department transports will inevitably, down the road, lead to Fast Willie demanding increased funding to increase the personnel and equipment necessary to handle this increased workload.  It is as certain as the sun rising in the east tomorrow morning.

So this “agreement” will ultimately not just be bad for AMR, and not just bad for patients requiring emergency assistance, but for Las Vegas taxpayers, as well!

Because if you can find it in the Yellow Pages…