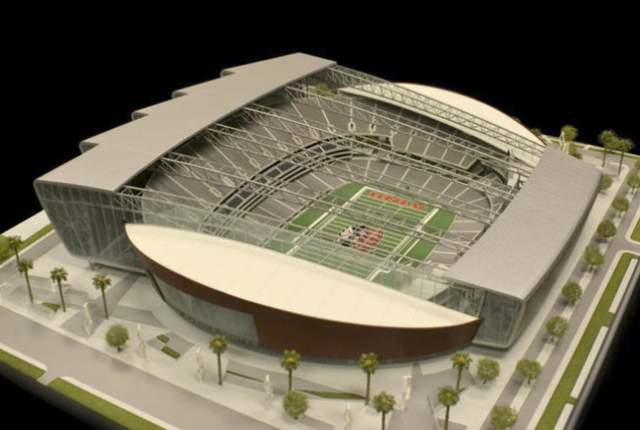 (Chuck Muth) – A group of investors, including Sheldon Adelson and the Las Vegas Sands, are trying to put a deal together to build a new state-of-the-art domed stadium near the Strip that, they hope, will result in the NFL’s Oakland Raiders football team relocating here.

The exact location and funding formula have not yet been finalized, but proposals so far have included somewhere in the neighborhood of $500 million in public financing for construction of the estimated $2 billion project.

To put that in perspective, Gov. Brian Sandoval and the Nevada Legislature gave double that amount in tax breaks – $1.3 billion – to billionaire Elon Musk to bring his Tesla battery manufacturing operation to northern Nevada; something Musk said this week was needed just to show “we cared.”

And Tesla can’t even run a prevent defense!

Anyway, even though the funding formula hasn’t been set yet, KTNV-TV 13 released a poll conducted by Rasmussen this week that shows 55% of respondents oppose using tax dollars to build the stadium.

However, the question was rather questionable.

According to KTNV, the 750 likely voters surveyed in the robo-call and online poll were asked if they support or oppose “the use of up to $500 million in state taxpayer money to help finance a stadium that would bring the NFL’s Raiders franchise to Las Vegas.”

The fact is the proposal is to use existing ROOM TAX dollars – which are paid almost 100% by tourists, not state taxpayers – to help fund the construction. That’s a big difference.

Yet even as misleading as the question was phrased, just barely over half of respondents opposed the plan.  This actually shows fairly strong support – or, at least, relatively weak opposition.

Indeed, I’m guessing opposition would drop to well under 50 percent if those surveyed were told tourists, not state taxpayers, would be picking up the tab for a stadium that would be used, not just for the Raiders, but for UNLV’s football team and all manner of concerts and other special events.

By the way, those room tax dollars are the same room tax dollars currently being used to subsidized the Las Vegas Convention Center, which unfairly competes with private sector convention facilities by charging below-market rates.

Now, I recognize many conservatives understandably object to using any tax money – tourist or otherwise – to build a stadium.  I get it.

But the fact is our governor and Legislature have already opened this Pandora’s box by giving tax breaks to all manner of favored businesses to move to Nevada in the name of “economic development” and diversity.

Tesla is the Mother of All Such Deals.  But we also did it for Faraday Motors and a slew of other comparatively minor businesses, including some high-tech firms just recently.

But entertainment is still what we do most and best.

Las Vegas continues to be the Entertainment Capital of the World.  And if we want to keep that distinction, we need to diversify into major league sports entertainment – as we just did by adding an NHL hockey franchise to the new T-Mobile Arena.

And to those who say, “Yeah, but the T-Mobile was built with private money,” I’d point out – um, not really.

Remember, MGM this year introduced PAID PARKING on the Strip for the first time at all of their properties.  And guess who pays the bulk of those new fees?  Our tourists.  It’s nothing more than a “room tax” for cars with the middle-man cut out.

In any event, we still have another two months before the details are hammered out and known.  And at that point, I’m guessing a properly-worded question that makes it clear that tourists – not you and me – will be paying for the public funding portion of the project, support will dramatically increase.

N&V StaffJune 18, 2022
Read More
Scroll for more
Tap
Parents and students explain why ESAs are crucial for academic success
Why Nevadans should vote to legalize marijuana