(Thomas Mitchell, 4TH ST8) – The Democratic majority in the Nevada Legislature is doing everything they can to erase everything accomplished by the 2015 Republican-controlled session. First, labor reform and a minor prevailing wage reform are rolled back. Now, they want to keep Nevada a territory instead of barging ahead into some semblance of statehood.

In 2015, the Legislature passed Senate Joint Resolution 1, which urged Congress to release about 7.2 million acres of federal public land to the state, which would have reduced the federal land control in the state from about 85 percent to about 75 percent.

In support of that resolution, in March 2015, Congressman Mark Amodei, who represents northern Nevada, introduced H.R. 1484, dubbed the Honor the Nevada Enabling Act of 1864 Act. The House Natural Resources Subcommittee on Energy and Mineral Resources finally got around to conducting a hearing on the bill in November but the bill lapsed with the session of Congress. 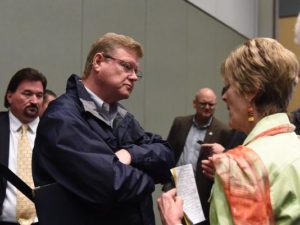 Amodei in a meeting in Reno on April. (Courtesy: Reno Gazette-Journal)

On Tuesday, the Assembly Committee on Natural Resources, Agriculture and Mining heard testimony on Senate Joint Resolution 12, which would rescind SJR1 as if it never happened and the results of a years-long public lands task force report was written in smoke. That task force found that, while the federal government loses 91 cents an acre on the land it manages, states with public land trusts make $28.59 acre, meaning Nevada could net $114 million by taking over just 10 percent of BLM land.

Meanwhile, Rep. Amodei appears to be throwing in the towel. He told the Reno newspaper editorial board this week that he won’t likely reintroduce a bill to transfer federal land to state control. “Transferring millions of acres of public lands … is not something I think the majority of people think is a good idea,” he was quoted as saying.

Janine Hansen, representing the Nevada Committee for Full Statehood, was one of the few to testify against SJR12. She noted that the federal land bureaucracies are blocking economic development in rural Nevada.