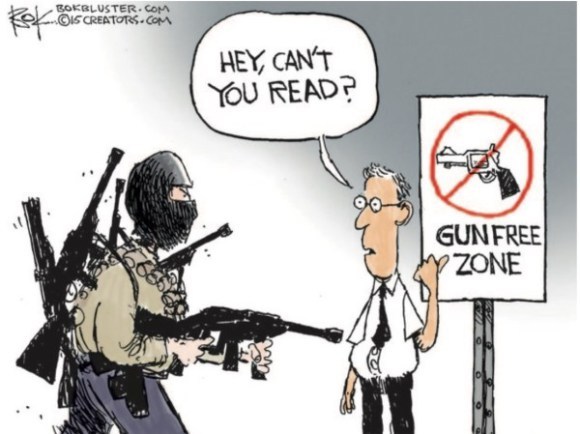 (Thomas Mitchell, 4TH ST8) – Lawmakers in Carson City continue to exhibit rabid hoplophobia — fear of guns. A bill has been introduced to further extend gun-free zones to public libraries and their parking lots. Senate Bill 115, introduced by state Sen. Mo Denis of Las Vegas, would add public libraries to the current law, which already prohibits guns and other weapons in the buildings and parking lots of universities, public and private schools and childcare facilities. Now, we have no problem with the private owners of land and buildings demanding that visitors come unarmed, and the state is surely the owner or custodian of universities and public schools. Though why lawmakers should be allowed to dictate to private schools and private childcare facilities is beyond us.

Additionally, this bill is a pointless endeavor that does nothing but add needless paperwork and wastes time, because every library district in the state has the power to control its own grounds and facilities. The Las Vegas-Clark County Library District already has a policy barring arms inside buildings and has guards who check to make sure that the holster on your belt holds a cellphone and not a handgun.

This law would require someone to get written permission to bring his or her weapon onto a library parking lot or into a library building.

During a recent committee meeting on the bill, Republican state Sen. Michael Roberson of Las Vegas, said, “I’m concerned that if these libraries don’t have adequate security that what we’re doing is we’re telling the public that we’re creating gun-free zones. And those here that want this bill can disagree with me but there have been studies that show gun-free zones are a magnet for criminal activity and mass shooters.”

He said the bill undermines law-abiding Nevadans and actually endangers the public.

Republican state Sen. Don Gustavson — who represents all of Esmeralda, Humboldt, Lander, Mineral, Pershing and parts of Nye and Washoe counties — echoed Roberson’s concerns about creating gun-free zones. He asked rhetorically whether one would have a quicker response by pulling out a cellphone and calling 9-1-1 or pulling out a weapon. He said many in his district carry concealed weapons wherever they go.

According to the Nevada Firearms Coalition, since about 1950, more than 95 percent of all mass shootings in America have taken place where law-abiding citizens are banned from carrying guns.

Most puzzling is why it is a crime to have a gun in your car in the parking lot of these facilities. In fact, in the 2015 legislative session Assemblyman John Hambrick introduced a bill that would have allowed guns in vehicles at the aforementioned locales. A hearing on the bill was packed with proponents and opponents. A digest of the bill stated it would add an exception to the law so that a person would not be prohibited from possessing a weapon on those specific grounds if it were inside a locked or occupied motor vehicle. Seemed like a common sense approach, but it never got out of committee.

So people who are accustomed to keeping a pistol in the glove compartment or a rifle in a gun rack or the trunk are breaking the law if they drop their children off on school or daycare parking lots or visit a college campus. Now this bill would add public libraries, even if one is dropping a book at an outside collection box. Having a gun in the parking lot is not as good as having one on your person if the need arises. Just ask the vice principal of the Pearl, Miss., school who had to run a quarter mile to his vehicle to retrieve a gun to stop a shooter.

In October of 1997, a young man showed up on a school campus carrying a .30-30 rifle. He fatally shot two students. At the sound of gunshots, the vice principal ran a quarter of a mile to his truck, because the school was declared by law to be a gun-free zone, to recover and load his pistol before returning to campus, where he captured and disarmed the gunman and held him for four minutes until police could arrive. This could be an opportunity for an enterprising lawmaker to show some common sense for a change. Amend SB115 by adding the parking lot exception offered by Hambrick two years ago. That would not go far enough but would be a move in the right direction. Also, let library districts set their own policies.