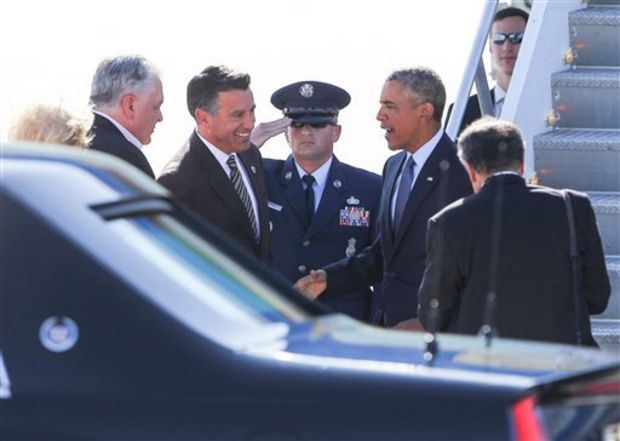 Gov. Sandoval welcomes and greets Pres. Obama when the latter visited Nevada last week to talk about important issues concerning Nevada, one of which is the Endangered Species Act. (Source: Associated Press)

(Thomas Mitchell) – Gov. Brian Sandoval took the opportunity to bend the ear and twist the arm of President Obama when he was in Las Vegas this past week, urging him to throw his weight around and prevent the greater sage grouse from being listed this month under the Endangered Species Act.

Such a listing could be devastating for mining, oil and natural gas exploration, agriculture, wind turbines, solar panels, power transmission lines and recreation.

“I would like to thank President Obama for taking the time to visit the great state of Nevada and agreeing to meet with me on behalf of all Nevadans,” Sandoval said in a statement released after the brief visit. “Today we discussed several pressing issues facing the mountain west including conservation, economic development, and renewable energy. Most importantly, we discussed the critical need for efforts to protect populations of the greater sage-grouse to responsibly align with ongoing development efforts, which I firmly believe is achievable through a conservation plan based on cutting edge science, common sense best practices and collaborative decision-making. I am hopeful that our meeting today will serve as a stepping stone as we continue to navigate this important issue. Working together, I’m hopeful that we can preclude the need to list the greater sage-grouse just as we have done with the bi-state sage-grouse.”

Sandoval has more than promises of future collaborative efforts in his quiver of arguments.

According to a recent study by the Western Association of Fish and Wildlife Agencies, the population of greater sage grouse across its range in 11 Western states is already rising dramatically. The number of sage grouse males counted on leks range-wide in 2015 increased by 63 percent compared to the number counted in 2013.

It was data such as this that prompted Interior Secretary Sally Jewell to back off plans to list the bi-state or Mono Range sage grouse in April. The agency was planning to set aside nearly 1.9 million acres in Carson City, Lyon, Douglas, Mineral and Esmeralda counties in Nevada, as well as land in Alpine, Mono and Inyo counties in California, as critical habitat for that distinct grouse population.

“We came together because we care, and we care about these lands and these landscapes,” Jewell said in Reno at the time, noting efforts by many parties to protect the birds. “Because of your work this amazing species no longer faces the threat of extinction.”

Another positive development came this past week, when the Department of Agriculture’s Natural Resources Conservation Service agreed to spend $211 million to support greater sage grouse conservation on private lands over the next three years.

It is estimated that about 30 percent of the sage grouse habitat is on private land, though that is considerably less so in Nevada where 85 percent of all land is federally controlled.

“Conservationists and landowners across the West are starting to see real results on the ground for sage grouse conservation and sustainable ranching …” Whit Fosburgh, president and CEO of the Theodore Roosevelt Conservation Partnership, was quoted as saying in a press release. “We’re happy to see this commitment … and Congress should ensure long-term funding of this important initiative and others that protect the healthy sagebrush ecosystem we know is so critical to wildlife, sportsmen’s access, and the outdoor economy.”

Ranchers who have worked on this conservation initiative in the past have reported increased grass cover and livestock weight gains.

“The new-age adage of ‘what’s good for the bird is good for the herd’ goes for mule deer and other big game animals, as well as livestock,” said Miles Moretti, president and CEO of the Mule Deer Foundation, in that press release.

A court-mandated deadline on whether to list greater sage grouse is due by Sept. 30.

In the past Sandoval has groused about federal agencies ignoring local and state efforts, saying, “We have expended millions of dollars and thousands of hours to present a scientific, innovative and effective conservation plan.”

We hope the fact that these efforts are being made and are provably already succeeding will be heard in Washington.