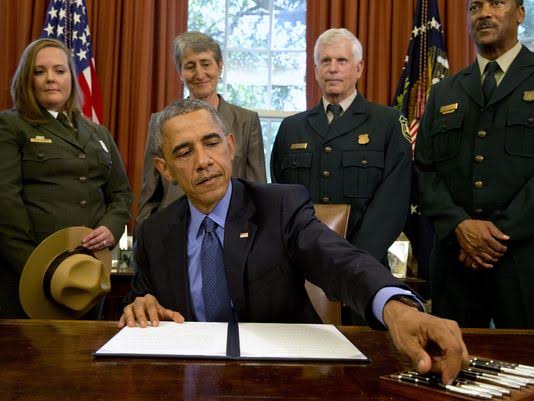 (Stanley Paher & Tyrus Cobb) – In a stunning set aside, at Senator Harry Reid’s urging, President Obama announced the establishment of the “Basin and Range National Monument” in central Nevada, ostensibly an area marked by “blissful peace and rich in historical, cultural and natural resources” according to two supporters, Virginia Valentine and Ron Hunter (see RGJ, July 26). Of course, neither Valentine nor Hunter has ever been in this region, despite their glowing endorsement.

There is a lot of unspoiled land in Nevada, with opportunities for recreation, observing wildlife and viewing Native American rock art. However, there is nothing special about this enormous 700,000+ acre set aside that differentiates it from most places in Nevada. What the designation does, however, is create another obstacle to the construction of the railroad the U.S. government has proposed to bring spent nuclear fuel to the Yucca repository. And that clearly is the primary and only purpose behind SEN Reid’s actions.

We both have familiarity with the region and of the importance of preserving key cultural sites. I, Stan, as the author of a Nevada atlas and as a field researcher, have made many trips to the area, which is accessed by just one two-lane road. This will never be a tourist destination! I have found only one archeological site with rock art, three other petroglyph sites, and fences galore with barbed-wire-strung gates preventing access.

I, Ty, have served on the Board of the Nevada Rock Art Foundation NRAF), the group dedicated to preserving ancient petroglyph sites. In all my years on the NRAF Board I can’t recall ever discussing any site in this gigantic region—certainly nothing comparable to finds in the Valley of Fire, the caves near Lovelock, or at Lagomarsino Canyon east of Reno.  Indeed, a check on the current NRAF website does not show any significant petroglyph finds in this gigantic “National Monument”, among the 250+ sites portrayed, and the few sites that exist are already on private land! Same with the massive piece of earth art there done by Michael Heizer, “City”, one of the largest sculptures ever created. It is already on private land. Doesn’t need more protection!

One is struck by the rather tepid “opposition” from our state leaders, including Gov. Brian Sandoval and Sen. Dean Heller. Why? Because this low-grade “Monument” was created for just one reason: to serve as another obstacle to the reopening of the Yucca repository by preventing the construction of a railroad.

Rural Nevada abounds with opportunities for recreation and viewing Native American rock art. So why this Monument? Because it was created for just one reason: to serve as an obstacle to the reopening of the Yucca repository by closing off the proposed railroad route from west of Caliente to Yucca Mountain.

The creation of this Monument, however, does not obviate the fact that Yucca is still the legally designated repository for high-level nuclear waste. That is the law of the land, and all of Sen. Reid’s machinations won’t change that fact. The Senator and the state have created many budgetary and bureaucratic impediments to the transfer of nuclear spent fuel to Yucca. But that site remains as the designated repository for the waste and will likely move forward once Sen. Reid leaves office. That would suit most Nevadans, by the way, since reliable polls (Glen Bolger) show that over 2/3 of Nevadans either want to accept the reopening of Yucca, or have our state negotiate for benefits and then open the site.

If Sen. Reid thinks that Yucca is not in our interest, contrary to what a significant percentage of Nevadans believe, then he should focus on securing Congressional legislation to change the law. That won’t happen, of course!