President Donald Trump’s response to the violence in Charlottesville, Virginia on Saturday was…

“We condemn in the strongest possible terms this egregious display of hatred, bigotry and violence on many sides, on many sides.”

So the president, as he has numerous times in the past, condemned hatred, bigotry and violence.  But that wasn’t good enough for the Trump-haters who whined, kvetched, moaned and complained that he didn’t specifically single out “white supremecists” or the KKK in his condemnation.

“No matter what Donald Trump says or does at any given moment, it is never going to be enough.”

But as happens so often, it turns out President Trump was right and the critics were wrong.

You don’t have to be a racist to object to the rewriting of American history by removing Civil War statues that have stood for over a hundred years.  And you don’t have to remove a statue of Robert E. Lee to put up a statue of Frederick Douglas or Harriet Tubman right next to him.

The indisputable fact remains that there has been considerable hate, bigotry and violence from the alt-left side of the political spectrum, as well.  Especially when a conservative speaker is scheduled to appear on a liberal college campus!

And while the KKK wears white hoods to hide their identity, the alt-left wears black masks.  Take a look… 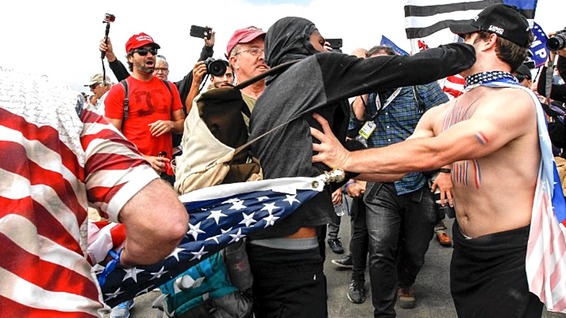 Funny how you never seem to hear the Fake News Media, especially CNN, screaming at Democrats to condemn the violence of left-wing extremist groups such as Antifa and Black Lies Matter.  Talk about selective outrage.

I thought maybe NFL owners – who have refused to hire anti-cop/America-hating quarterback Colin Kaepernick this season – had learned their lesson; that allowing pampered multi-millionaire players to disrespect the National Anthem before games without penalty was extremely offensive and an insult to the league’s fans in the stands who pay everyone’s salary.

Then the Oakland Raiders’ Marshawn Lynch opted last weekend to sit on his keister munching on a banana while the Star Spangled banner played.  And that spit-in-the-eye was followed up by Seattle’s Michael Bennett, who also refused to stand with the rest of his teammates.

Worse, the coaches of both teams have defended these spoiled, ungrateful, disrespectful jerks.

Fine.  It’s a free country.  The NFL can tolerate this insulting behavior if it so chooses.  And I can so choose to once again boycott the NFL this season.  Won’t cost me a dime.  Actually, it’ll save me a few.

“More than 97% of self-identified conservatives said that McConnell needs to be replaced by ‘someone who will fulfill Republican campaign promises.’  Only about 2% agreed with McConnell that President Trump is demonstrating ‘excessive expectations.’” – ConservativeHQ, 8/15/17