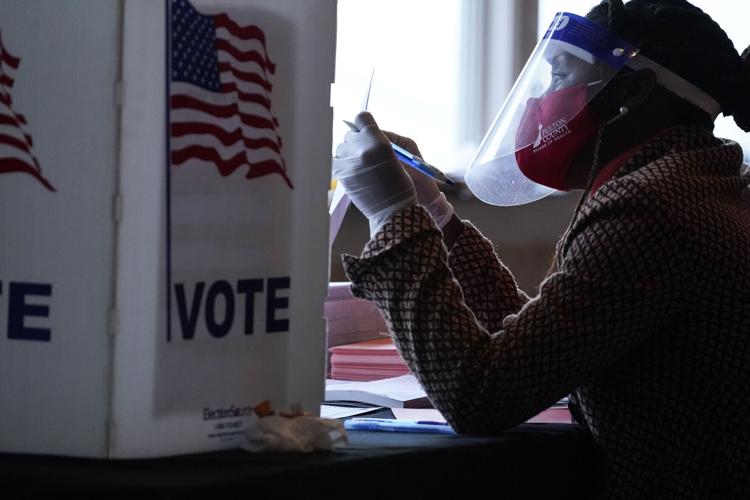 A poll worker talks to a voter before they vote on a paper ballot on Election Day in Atlanta on Tuesday, Nov. 3, 2020.
Brynn Anderson / AP

(The Center Square) – Roughly 100 million early votes already were cast before the first polls opened Tuesday morning, Michael McDonald, professor at the University of Florida, says. He runs the Election Project, which tracks polling and election data by state.

“These reports will include early voting activity from the proceeding day,” McDonald said in the latest analysis published Nov. 1. “It is also likely reports by Tuesday morning will fail to capture all of the pre-election voting activity since there are sporadic reports of election officials experiencing delays in processing the unprecedented number of mail ballots.”

Trafalgar correctly predicted that Trump would win the necessary number of Electoral College votes in 2016 and key battleground states, including Pennsylvania, Michigan, Florida and North Carolina. Nearly all other pollsters were wrong.

Trump also won Wisconsin in 2016, becoming the first Republican presidential candidate to do so in decades.

Former Speaker of the House Newt Gingrich predicts that Trump will receive 326 Electoral College votes, saying, “the Left will be terribly shocked.”

Minnesota Attorney General Keith Ellison, a Democrat, also told reporters it was likely that Trump would receive all 10 of the state’s electoral votes.

“There is a clear feeling among conservatives and people that are for the president that they’re not interested in sharing their opinions readily,” Cahaly said. “These people are more hesitant to participate in polls. So if you’re not compensating for this, you’re not going to get honest answers.”

In 2016, “On a live poll, the deviation was that Trump was understated probably 6%-7%, and on an automatic poll it was probably understated 3%-4%,” Cahaly told TIPP Online.

RealClearPolitics reported in 2018 that Trafalgar’s analysis of the 2016 Election considered “a unique method that sought to measure support from voters who’d been ‘inactive’ in recent election cycles.” It notes that Trafalgar correctly predicted Republican Ron DeSantis’s Florida gubernatorial win, which other polls missed, in addition to many U.S. Senate races in multiple states. RealClearPolitics argues Trafalgar is “one of the most accurate polling operations in America.”

This year, Silver predicts, “It’s pretty unlikely, though, that either of them will hit the 270 electoral votes needed to win by the end of the night.”

Trafalgar predicts Trump will receive 49.1 percent of the popular vote and Joe Biden 46.6 percent, among other predictions.