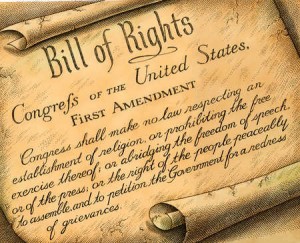 (Eric Wang) – In a 5-2 decision, the Nevada Supreme Court recently vindicated the right of a citizen advocacy group to hold politicians accountable without having to register and report with the government. Reversing a lower state court, the Nevada high court held that Citizen Outreach, which was represented by the Center for Competitive Politics, did not engage in “express advocacy” campaign speech when it distributed flyers in 2010 criticizing a politician’s policies and conduct in office.  Although CCP agrees with the outcome of the case, the court’s narrow decision still leaves unsettled the important question of what rules apply to citizens engaged in similar speech today.

Similar to the laws in many other states, Nevada law requires organizations to report their speech to the state government any time they spend more than $1,000 on “express advocacy” political “expenditures,” and they must register and file ongoing reports about their spending and donors if they spend more than $1,500 or $5,000 on express advocacy expenditures; the different thresholds depend on what the state deems to be a group’s “primary purpose.” Organizations that guess wrong about the nature of their activities, as Citizen Outreach was alleged to have done, are subject to thousands of dollars in fines.

The Citizen Outreach case arose from the 2010 elections, during which the group sponsored two flyers critical of then-Assemblyman John Oceguera, who was up for re-election.  As the dissenting opinion recounted:

The first flyer described Oceguera as “Getting Fat off the Taxpayers” by earning one salary as a firefighter and one as an assemblyman, “voting for tax hikes,” and “sponsoring trivial legislation.” The flyer concluded “[w]e don’t need any more fiddling from John Oceguera. The second flyer bore similar criticisms, accused Oceguera of “gam[ing] the system to retire at age 48,” and commanded voters to “tell John Oceguera that he needs to work like the rest of us!”

As characterized by the dissent, under a standard first articulated in 1987 by the U.S. Court of Appeals for the Ninth Circuit in a case called FEC v. Furgatch, speech is determined to be “express advocacy” if:

(1) the “message is unmistakable and unambiguous,” (2) the communication “presents a clear plea for action,” and (3) it is “clear what action is advocated,” such that a reasonable person could only understand that voting for or against a particular candidate was being advocated.

Notwithstanding the existence of the so-called “Furgatch standard” for express advocacy, the majority on the Nevada high court held that, in 2010, when Citizen Outreach distributed its flyers, it was unclear whether the Nevada legislature had adopted the Furgatch standard. Accordingly, the majority opinion applied a narrower “magic words” test established by the U.S. Supreme Court in 1976 in Buckley v. Valeo, and held that the Citizen Outreach flyers were not express advocacy under that standard. Nonetheless, the majority left open the possibility that a subsequent bill passed in 2011 may have broadened Nevada’s standard for express advocacy.

By contrast, the dissent applied the Furgatch standard and concluded that “[t]he only way that a voter could stop Oceguera’s ‘fiddling’ or ‘tell’ him ‘to work like the rest of us’ was by voting against Oceguera.”

The dissenting justices on the Nevada Supreme Court must not be very imaginative, or they take a very dim view of constituent communications. I can think of a number of ways in which citizens dissatisfied with Oceguera’s policies and conduct could have told him to stop “fiddling” with “trivial legislation” and to earn a legitimate living: (1) by telephone; (2) by e-mail; (3) by “snail mail”; (4) in person; or (5) by publishing a flyer, as Citizen Outreach did. It is simply not literally true that “[t]he only way” to convey these messages to Oceguera was by voting against him. However, if one were more cynical, one might surmise that, as public officials subject to election themselves, the dissenting justices simply didn’t want to empower the people with broad rights to speak critically about the justices’ own conduct without having to register and report with the government or be subject to huge penalties.

When the Nevada high court has the chance to consider the question of express advocacy again in the future, the dissent’s opinion in this matter is a perfect example of why the broad Furgatch standard, or at least the dissent’s application of it, must be rejected. Under the dissent’s broad interpretation of the concept of “express advocacy,” anyone disseminating the following messages would be deemed to be engaged in campaign activity and would potentially have to register and report with the government:

Moreover, under this warped view of the world, government “watchdog” groups like the Center for Responsibility and Ethics in Washington (CREW) would be treated as political organizations and subject to a panoply of laborious and intrusive campaign finance laws – simply for attempting to hold politicians to high standards. And, indeed, that is precisely what one complainant recently alleged CREW was required to do. The Federal Election Commission punted on whether CREW’s efforts to promote its list of “Most Crooked Candidates” amounted to express advocacy and dismissed the complaint on other grounds. However, had the FEC applied the dissent’s reasoning in the Citizen Outreach case, CREW, a self-styled master of government ethics laws, would have found itself their servant. (Apologies to “The Police” for this poor paraphrase and inversion of their lyrics.)

As CCP Chairman Brad Smith has often noted, the campaign finance laws exist to allow the citizens to hold their government accountable, and not the other way around. The dissenting opinion in the Citizen Outreach case turns this principle on its head and must not be adopted by a majority of the Nevada Supreme Court when this issue comes up again.

Mr. Wang writes for the Center for Competitive Politics.