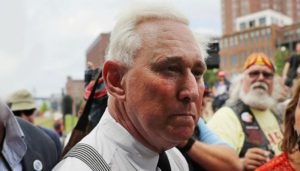 Stone was speaking in an interview on this reporter’s talk radio program, “Aaron Klein Investigative Radio,” broadcast on New York’s AM 970 The Answer and NewsTalk 990 AM.

“I think that the stakes are so high – and Donald Trump has made it pretty clear that if he is elected president he will seek the prosecution of Bill, Hillary, and Chelsea – that they would do anything necessary to remain in power. For anybody who thinks that election fraud is not common in this country, the voting machine today is merely a computer. And all computers can be rigged to have a predetermined outcome.”

“… There is evidence that the Clintons not only cheated with the super-delegates, but in States like Wisconsin and New York and Kentucky there were charges of widespread voter fraud on behalf of Hillary. So it does happen here. It will happen here if this race is close. The big city machines, particularly Chicago, are very adept at manipulating these machines.”

Continued Stone: “So I think it’s a very real problem. And the single best thing that the Trump people can do is to register a million new voters in the ten swing States. What I would do is take the margin by which Romney lost, double it. That would be my target for new registration.”

Donald Trump has recently made comments about the possibility of voter fraud during the presidential election.

“And I’m telling you, November 8, we’d better be careful, because that election is going to be rigged,” Trump told Fox News host Sean Hannity earlier this month. “And I hope the Republicans are watching closely or it’s going to be taken away from us.”

Obama also addressed Trump’s general concerns last Thursday, stating state and local authorities – and not the federal government – are in charge of the election process.

“We do take seriously our responsibilities to monitor and preserve the integrity of the vote process,” he added.

“If we see signs that a voting machine or system is vulnerable to hacking, then we inform those local authorities who are running the elections that they need to be careful,” Obama stated.