Romney: Business Owners Need To Be Able To Dream Again 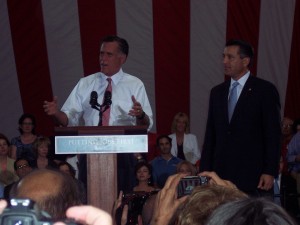 (Lori Piotrowski) – It was 85 degrees plus in the warehouse, and even though people were vigorously fanning themselves and each other to keep cool, spirits were high as they waited for more than an hour to see the man they’d like to see as president of the United States, Mitt Romney.

More than 300 were seated in the warehouse of Somers Furniture in south Las Vegas, and some 100 more were standing. Some attendees brought their children and grandchildren. A little cub scout wore his uniform, proudly sporting a Heck sticker like a badge.

Behind the podium is a gigantic American flag stretched from the rafters to the floor, and to the left is a hand-painted sign reading “Obama Isn’t Working.”

Eventually, Congressman Joe Heck and Lt. Governor Brian Krolicki stepped up to the dais to give a few words of introduction.

The crowd cheered loudly as the congressman spoke of the honor to have Romney in Las Vegas on the day he would “clinch the nomination,” speaking of the Texas primary that indeed provided the candidate with the final delegate count for the nomination at the national convention in August.

Krolicki, who has made earlier appearances with Romney in Las Vegas, joked with Heck about forgetting to introduce his wife, saying, “First things first!” He also thanked the owners of Somers Furniture for making the space available, saying that if Romney is president, soon that space would be filled with furniture to rent.

He also emphasized to the crowd that the 2012 elections were more than just electing a candidate. “This is about re-electing Joe Heck to Congress, it’s about re-electing Dean Heller to the U.S. Senate and all the other races—State Assembly and Senate, county commission—all throughout the county. So this is important for all the campaigns to work together. This is going to be one heck of a six-month rally!”

With that, he introduced the crowd to Nevada governor, Brian Sandoval and candidate Romney, saying “It’s all about the economy. We need a president who understands about jobs, who knows how to turn this thing around and get America back to work.”

“Nevada’s on the move,” Sandoval opened, “but we can do a lot better.”

Romney and Sandoval had spent the earlier part together meeting with business owners, and he explained a common theme: “They have put their dreams on hold. We can’t put people to work.”

“We need a leader; we need somebody that’s actually run a business,” to which the audience responded enthusiastically.

He spoke of working with Romney several years ago, mentioning Romney passion for getting things done.

Romney opened his comments by reminded the audience of Obama’s promises of hope, of making things better. “He’s been a big disappointment, hasn’t he?” Romney asked.

He continued by reminding the attendees of the multiple disparaging comments Obama made about Las Vegas and discouraging companies and government agencies from booking meetings in Las Vegas. “When I’m president, I’m telling people, ‘Come to Las Vegas. I’ve been here several times. I love it here!’”

Romney struck a more serious note when he spoke about the meetings he had with local business leaders. “The policies [government] puts in place have to make it easier for business to grow.” He explained the result of negative comments and how the effect cascades through many different businesses. “We need to have presidents who understand how businesses work, small businesses, large businesses. And I do!”

Romney talked about the severity of regulations on businesses, saying that big businesses do just fine, but it is the small business owner who suffers under the burden. One unnamed small banker told him that his bank had more compliance officers than loan officers, just to keep up with all the regulations under the Dodd-Frank bill.

Of the ten business owners Romney and Sandoval met with, three specifically named the Patient Protection and Affordable Care Act (i.e., Obamacare) was the reason they were not opening up new businesses or expanding by hiring more employees.

Romney wants to lower the marginal tax rate, limit deductions and exemptions for people at the high end so we can keep the revenue coming into Washington, and get those tax rates down so small business can hire people. My priority and the national priority have to be putting people back to work.”

With a brief segue into energy, Romney joked that Obama’s statement that he is “for all of the above” energy sources—oil, natural gas, coal—really was a focus on green energy—solar and wind—above ground sources.

“If you like jobs like I like jobs, if you like a growing economy like I like a growing economy, if you like people going back to work for higher wages and salary like I do, then you’re going to take advantage not only of the energy that comes from above the ground, but also the energy that comes from below the ground. We’re going to get American energy secure and stop spending money overseas.”

Romney began his closing remarks by reminding the audience of the Founding Fathers and their wisdom in putting together the documents that formed this country. “Our life, our liberty, and our pursuit of happiness. We would be free in America to pursue our dreams. I gotta tell you, that’s why people are having hard times. As the governor mentioned earlier, some business owners have had to put their dreams on hold. We need to put these dreams on the front burner again!”

“If we turn away from this path towards Europe, if we instead turn back to the principles of who we are, you’re going to see a resurgence of the American economy that’s going to surprise the world!”