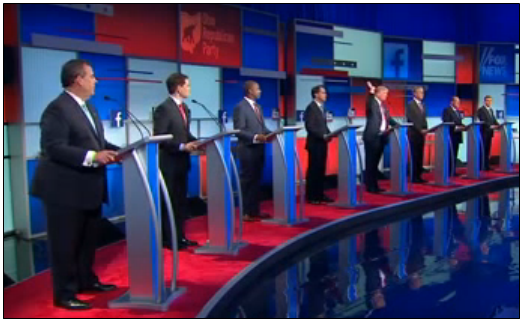 (Robert Romano) – It had all of the makings of a classic gotcha moment.

At the start of the August 6 Republican presidential debate in Ohio, Fox News moderator Brett Baier asked, “Is there anyone on stage, and can I see hands, who is unwilling tonight to pledge your support to the eventual nominee of the Republican party and pledge to not run an independent campaign against that person?”

For any other candidate, such a position might be fatal. But for Trump, it plays to his campaign theme of being the political outsider running against the Washington, D.C. Republican establishment.

Baier noted, “Experts say an independent run would almost certainly hand the race over to Democrats and likely another Clinton. You can’t say tonight that you can make that pledge?”

“I cannot say,” Trump said, adding, “I have to respect the person that, if it’s not me, the person that wins, if I do win, and I’m leading by quite a bit, that’s what I want to do. I can totally make that pledge. If I’m the nominee, I will pledge I will not run as an independent. But — and I am discussing it with everybody, but I’m, you know, talking about a lot of leverage. We want to win, and we will win. But I want to win as the Republican. I want to run as the Republican nominee.”

Later on the Hannity Show, Trump further explained his position to host Sean Hannity, “If they don’t treat me well, Sean, why should I make that pledge? At this moment, it’s great leverage, and I might as well use it.”

Trump added, “I just want to be treated well and treated with respect.”

In other words, holding out the possibility of an independent presidential run frees up Trump to pursue the campaign he envisions.

And so far, it appears to be working, as Trump has rocketed to a lead in the national poll, and now appears to be leading substantially in early states Iowa, New Hampshire, and South Carolina.

The current political environment has seen declining party identification over the past decade. People have become disillusioned with the two-party system that seems to produce the same outcomes regardless of who is in power. That is the heart of Trump’s appeal on issues like illegal immigration and trade.

In particular, Republican Party identification has collapsed, research from Gallup reveals. Self-identified Republicans have dropped from a high of 39 percent in September 2004 to just 23 percent today. In the meantime, that decline directly coincided to the uptrend in independents, from 28 percent to 46 percent today.

Sure, Trump could be bluffing. But, consider the benefit of raising his hand at the debate in a state like, say, New Hampshire. It is an open primary allowing independents to vote. In the latest poll from Gravis, he was up by 17 points there.

Running as an independent for president, then — even while running in a party primary — is seen as an asset by voters. Especially independent voters.

It makes him that much more appealing as a candidate who, he can say credibly, will not be controlled by the party establishment. And, one cannot discount how many new potential voters he is bringing to the table in the process. The August 6 debate, with 24 million viewers, was the most highly-rated presidential primary debate in history.

So, what’s supposed to be a negative and an act of political suicide — refusing to rule out an independent run — turns out to be a net asset. Trump is getting all the benefits of running as an independent, all the while leveraging the known Republican brand and the resources that come with running in the party’s primary.

It represents Trump’s trump card. He identified it as leverage.

Meaning, if Republican Party insiders want to forestall such a run, they had better, in the least, be respectful of his candidacy or, at a maximum, help make him the party’s nominee.

N&V StaffOctober 4, 2022
Read More
Scroll for more
Tap
We Won! Yea.
Bully Trump is whining about being picked on