There’s something about Trump

There’s something about Trump
N&V Staff 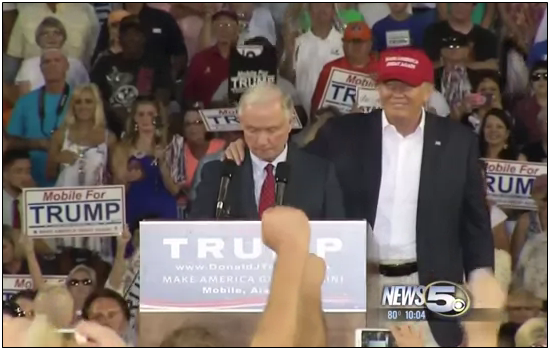 (Rick Manning, NetRightDaily.com) – There is something about Trump.

He has the “it” factor. While traveling through Ireland with a tour group earlier this summer, the first question I received from a blue-collar Canadian couple was about Donald Trump. The man, a leader in his local building trades union, stated on multiple occasions, “Maybe it’s time for a man of business to lead your country.” Hardly the sentiment one would expect from a union man.

At home, a friend who works as a school bus driver and maid tentatively asked me about him, ending the neutral conversation with her strong declaration of support. I doubt that this smart, hard-working, woman has ever registered to vote, but she will vote for The Donald.

Each of these people know something is very wrong with our country and that the system is broken, and each independently have come to the conclusion that Donald Trump’s brand of straight-shooting is what is needed to fix it.

Political platitudes and slick campaign commercials cannot compare to the politically incorrect businessman who has heads nodding across the nation, even as political elites are scratching theirs.

The appeal is simple. The people see Trump as authentic and a direct contrast to Jeb Bush or other candidates being pushed by the inside-the-Beltway establishment. A billionaire, who doesn’t need the job, willingly accepting that some business partners will choose to end their relationship due to his positions because he sees his nation in trouble.

Republican consultants think they can beat Trump by talking about issues, never realizing that the public doesn’t believe any of them because, too often, their actions have not matched their rhetoric. All the rules about credibility have been thrown out the window. Instead the people hear Trump cutting through the noise and know that at least if he’s in charge, they will have hired someone with the business acumen, smarts and leadership ability to shake up the stagnant, stinking pond that is Washington, D.C.

Trump’s Teflon coating against traditional political attacks stems almost entirely from the illegitimacy of the attackers and the long-time affinity they have with the Trump brand. When a political pundit or politician declares him unfit because his health care position has changed from earlier support of a single-payer system, listeners know that the GOP has chosen to fund the hated Obamacare every year it has been in existence. When they attack his immigration positions, listeners remember the millions of dollars of ads from Republicans attacking Obama’s executive amnesty, as well as the subsequent decision to fund it.

It is Donald Trump, standing with Senator Jeff Sessions in a massive rally in Mobile, Ala., who is moving the needle with a comprehensive immigration plan that ends illegal immigration.

It is Donald Trump who led the charge against giving Obama fast-track trade authority. A move that makes Trump look more and more prescient as Obama defends a horrible Iran treaty and Republicans in Congress have made themselves impotent in stopping it. The more Republicans bemoan a nuclear Iran resulting from Obama’s deal, the less they look wise in giving the President what Senate Majority Leader Mitch McConnell called “an enormous grant of power” to negotiate trade deals.

It is Donald Trump who is taking on the culture of victimization that has permeated the country, by confronting the absurd political correctness that makes banning the U.S. flag at a California high school on Cinco de Mayo because it offends Mexican-born students the law of the land in the Ninth Circuit Court of Appeals.

People who go to work every day and shake their heads at how crazy our nation has become have a hero in Donald Trump.

For establishment Republicans, it is their own weakness in confronting what has been a wholesale assault on American culture that has forced the people to turn to Trump for leadership. In the month ahead, through the government funding process, Congress will get one last chance to show they are willing to stop Obama’s transformational agenda.

Failure to exercise their constitutional authority to put the executive branch in check will be the final nail in the coffin for establishment Republicans trying to stop the anti-Washington, Trump movement.

The author is the president of Americans for Limited Government.