U.S. Supreme Court ruling is another push to appoint judges instead of electing them

U.S. Supreme Court ruling is another push to appoint judges instead of electing them
N&V Staff

(Thomas Mitchell) – No doubt about it, the recent U.S. Supreme Court ruling that allows Florida to bar judicial candidates from personally soliciting campaign funding is not just a blow to free speech, but is another volley in the ongoing campaign to have judges appointed by elite committees of lawyers and judges and not voted into office by ignorant citizens who don’t know a judicial canon from a howitzer.

The court ruled 5-4, with Chief Justice John Roberts joining the court’s liberal faction, against Lanell Williams-Yulee, a 2009 county court judge candidate in Tampa. The Florida’s Supreme Court reprimanded her for a mailer asking for donations. 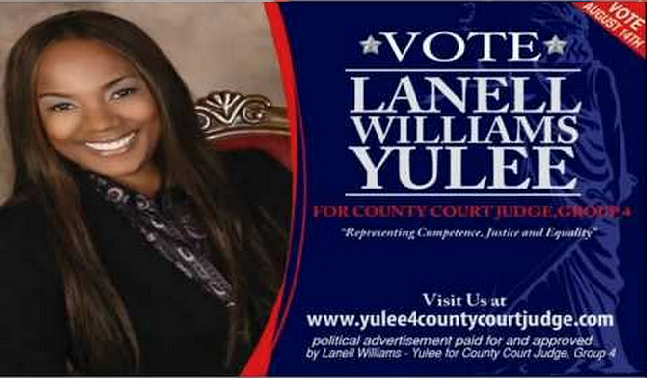 Though the Florida Bar code does not allow candidates to solicit funds, they may set up committees to seek funding, and the candidate may send personal thank you notes to donors, which seems to obviate the whole concept of separating judicial candidates from the squalor of being beholding to donors. It is all a ruse.

The dissent in the case by Justice Antonin Scalia, joined by Justice Clarence Thomas, makes clear the court’s ulterior motives.

Scalia wrote that the Florida code “scope suggests that it has nothing to do with the appearances created by judges’ asking for money, and everything to do with hostility toward judicial campaigning. How else to explain the Florida Supreme Court’s decision to ban all personal appeals for campaign funds (even when the solicitee could never appear before the candidate), but to tolerate appeals for other kinds of funds (even when the solicitee will surely appear before the candidate)? It should come as no surprise that the ABA (American Bar Association),whose model rules the Florida Supreme Court followed when framing Canon 7C(1), opposes judicial elections — preferring instead a system in which (surprise!) a committee of lawyers proposes candidates from among whom the Governor must make his selection.”

Thirty-nine states elect judges, including Nevada. An effort in 2010 to have Nevada judges appointed failed by a 58-42 margin, despite a vigorous campaign on its behalf.

“I think Americans want and expect to have one safe place in government, and that’s the court,” Justice O’Connor testified before the assembled journalists, “where somebody with a legal dispute can go and have somebody deciding the issue, based on the law, who is fair, independent and qualified. And I think your best chance of getting that is with this kind of a system. And it doesn’t take away people’s right to vote, it postpones it for whatever time is set in the legislation, one or two years. And then the voter can receive the information about the judge, the performance record, and cast a more intelligent ballot. Do you want to keep the person on the bench? Yes or no.”

She was dismissive of my argument that it is harder to bribe a million voters than one governor, even though I personally knew a governor who went to prison for that.

The Wall Street Journal pointed out at the time, “States using this so-called merit selection method have had their judicial selections manipulated by lawyers and bar associations that nominate guild favorites. In most cases this has pushed courts to the activist left.”

Yes, there is a problem with voters not being well enough informed about judicial candidates, but that is partly the fault of the legal community, which sets itself up as some bastion of virtuous objectivity, prohibited from sullying its robes in the mud wrestle that is electioneering.

Scalia also noted that the Florida ruling “banning candidates from asking for money personally ‘favors some candidates over others — incumbent judges (who benefit from their current status) over non-judicial candidates, the well-to-do (who may not need to raise any money at all) over lower-income candidates, and the well-connected (who have an army of potential fundraisers) over outsiders.’ … This danger of legislated (or judicially imposed) favoritism is the very reason the First Amendment exists.”

The court majority danced around so many precedents in law — using speculative phrases like “possible temptation,” “might lead” and “even unknowingly” — that Scalia at one point exclaimed: “This is not strict scrutiny; it is sleight of hand.”

Let’s hope this ruling doesn’t give anyone in Nevada ideas.

A version of this column was originally published in Mr. Mitchell’s  blog.

N&V StaffMarch 23, 2022
Read More
Scroll for more
Tap
EPA Clean Power Plan will drain the economy of U.S. and Nevada
Time to get Old Hickory off the $20 bill