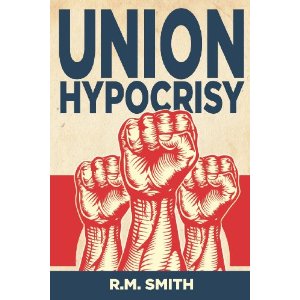 (NN&V Staff) – In “Union Hypocrisy: Organized Labors Double Standard in Business and Politics” (ISBN 1478275162), author and labor relations consultant R.M. Smith offers a unique perspective on unions and their members. Smith uses her history with the Teamsters to share personal information and history on the recent status of unions and their latest hypocrisy.

“Union Hypocrisy” is divided into multiple sections, each providing a look inside the current union movement. Information includes how unions react when their own employees want union representation, unions that sell out their own employees, and the history of the ties between unions and the Democratic Party.

A major focus of “Union Hypocrisy” is how unions have transformed from a movement that fought for workers’ rights into an association that now puts other objectives in front of union workers. It also examines the relationship between organized labor and political parties.

“Nobody has written a book like this before. ‘Union Hypocrisy’ includes actual documents, along with an untold history that insiders usually do not talk about, all which confirm the claims I make in the book,” says Smith. “I was inspired to write this book because of my experiences with the union from both sides. I was with the Teamsters for 16 years, and since 2007, I have been working as a labor consultant for various companies.”

Written in the nature of political authors Laura Ingraham and Michelle Malkin, Smith mixes political and business tones to give readers involved in labor unions, or interested in the labor movement, a creative outlook that is unique for a book of this subject matter.

“Union Hypocrisy: Organized Labors Double Standard in Business and Politics” is available for sale online at Amazon.com and other channels.

(In 2000, R.M. Smith went into the Southern Nevada Teamsters Training Trust as a trainer. After advancing to executive director, Smith developed, implemented and directed a registered apprenticeship program, as well as wrote the training manuals, which have now been copyrighted by the Teamsters Training Trust. Smith has also written in several trade magazines, as well as received an innovation award for designing a new trade training program. In 2006, she was asked to represent 26 trade unions in negotiating a contract with the Nevada State Secondary Education System. A year later, Smith started consulting in labor relations.)