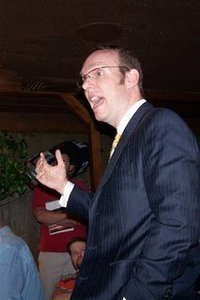 In response, Spivack did was any entrepreneurial spirit would do—start up another business. He was already selling his merchandise online, and being kicked out of the mall, and the ensuring publicity, increased his business. But it also led to speaking engagements.

Spivack is taking the idea of a free-market economy to the masses, and he’s coming to Las Vegas. His background in consulting, fundraising, and marketing, for non-profits and commercial enterprises, lend credence to his lectures in classical economic theory. His classes throughout the U.S. have been filled to standing room only crowds learning how to counter the left’s attacks on the economy.

His first talk was given to the Hickory, North Carolina, 9-12 group about economics. Based on the feedback, Spivack expanded the topic into an 8-hour seminar. This seminar, with minor revisions, has been given in 14 states.

With this seminar, Spivack strives to help conservatives understand that there is a way out of the current economic miasma—with a path developed by classical economists, such as Adam Smith and Milton Friedman. Spivack believes that all Americans are capable of understanding these principles, and in fact, they must understand them if they are to make informed decisions.

According to Spivack, Free Market Warrior is dedicated to teaching patriots how to retake control of their destiny as the forces of statism and socialism methodically destroy the last vestiges of freedom in America. He says, “We’re not here to gripe, whine or throw tantrums, but rather to learn the ways of the free market warrior in order to protect and defend the principles upon which the USA was founded.”

In 2010, Spivack wrote, The New Democrat (www.obamaparody.com), a parody-history of the Obama Administration that has sold about 5,000 copies so far.  He has also developed  a second seminar, “Getting There from Here,” to provide “a guide to surmounting the political challenges we face in our effort to return government to the size envisioned by our founders,” Spivack explained.

On November 10 – 12, Spivack will be in Las Vegas to spread the Free Market Warrior’s message. Topics covered by Spivack’s seminars include Money, Socialism, Foundations of Capitalism, Competing Theories of Value, the Poor, and others. For information about attending one of these two-part workshops, please contact Larry Bernstein at 702-516-3223 or send an email to FreeMktVegas@aol.com