Who Will Speak Up When They Come For You?

Who Will Speak Up When They Come For You?
N&V Staff 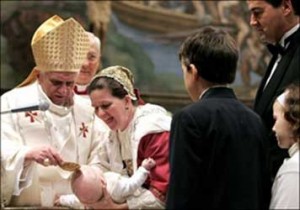 I simply do not know how else you can explain his personal assault on the Catholic Church last week.

Whether social conservatives like it or not, Roe vs. Wade is settled, albeit bad, law.

But where is it written anywhere in our Constitution that the Federal Government can force a whole religion to do things its teachings and doctrine believe are a sin?

Here is what the storm troopers in the Department of Health and Human Services originally decreed in plain language:

If you run a Catholic Hospital (or other religious agency), you MUST offer birth control and abortion in your health insurance plan. Never mind the teachings of the Church. In short, fealty to NARAL is more important than the First Amendment.

And on the website of the Committee to Re-Elect The President, they come up with the lame (and patently false) statistic that 98% of the women in the Catholic Church use contraception so—by inference— it must not matter what the Pope thinks. And they know this how? And even were it true, so what?

Who in the hell is Barack Hussein Obama to make that decision for the Catholic Church?

This isn’t about birth control or abortion. It’s about who pays for it.

Now, faced with a loud outcry from the Catholic Church, the President came up with a political maneuver that recalls Bill Clinton’s definition of what the word is is.

Instead of a Church employer paying for birth control and abortion, the insurer will pay for it. Really?! The premiums from the employer won’t go to pay for it. Just the insurer’s money. Right.

And if this is allowed to stand, what’s next? Government imposition of Sharia law? It’s a very short and incredibly slippery slope.

Keep in mind that this same administration had previously decreed that religious institutions, such as schools, could not “discriminate” in hiring teachers not of the faith that runs the institution. In other words, a Catholic University could be required to hire a Muslim theology professor.

And, the Supreme Court just handed the Lutherans a 9-0 victory against the Obamaites on a very similar situation where a teacher in a Lutheran school sued under employment non-discrimination laws to keep her position at a Lutheran school. The Court ruled, 9-0, that a Church could hire—or more importantly, not hire—whom it wished to minister or teach its religion without the interference of the government. 9-0.

Now, the Obamaites want to “accommodate” the Catholics.

Well, let me tell you, there is no “accommodating” the First Amendment. It was God who endowed us with certain unalienable rights, among them life, liberty and the pursuit of happiness. You can’t “accommodate” liberty. You either have it or you don’t.

The Catholic doctrine against contraception and abortion isn’t something you can “accommodate.” Nobody holds a gun to your head to patronize a Catholic hospital or work for a Catholic organization.

Barack Hussein Obama’s 20 years of church experience was from the Reverend Jeremiah Wright. He threw Wright under the bus in 2008 when he was running for President.

You remember Wright: “We have supported state terrorism against the Palestinians and black South Africans, and now we are indignant because the stuff we have done overseas is now brought right back to our own front yards. America’s chickens are coming home to roost.” And “the government lied about inventing the HIV virus as a means of genocide against people of color. The government lied.”

Yes, that Jeremiah Wright. The President’s religious mentor. Is this all falling into place now? The President is, quite simply, a religious bigot. He sees the needs of his administration and the politics of the hard left as being more important than the Bill of Rights. Some Constitutional Law professor he turned out to be.

We protect all religions in this country, not just some. If a religion has an unpopular tenant—such as Wright’s ridiculous assertion that we supported state terrorism against Palestinians—we protect his right to say it from the pulpit. And if the Catholic Church teaches that abortion is a sin and contraception is not acceptable, we do not force them to condone it.

The Reverend Martin Niemöller was an ardent nationalist and prominent Protestant pastor in prewar Germany, who emerged as an outspoken public foe of Adolf Hitler and spent the last 7 years of Nazi rule in concentration camps.

Here is what he said when Hitler came to power:

First they came for the Socialists, and I did not speak out —

Because I was not a Socialist.

Then they came for the Trade Unionists, and I did not speak out —

Because I was not a Trade Unionist.

Then they came for the Jews, and I did not speak out —

Because I was not a Jew.

Then they came for me — and there was no one left to speak for me.

If you don’t speak out now, when they come for you—and they will—there will most assuredly nobody to speak for you.