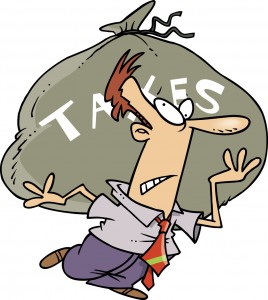 (Chuck Muth) – If Democrats continue to believe there’s even a slim possibility that a tax hike could pass through each house of the Nevada Legislature and blow past a certain gubernatorial veto, Republican legislators have only themselves to blame.

While Gov. Brian Sandoval continues to issue Shermanesque “No way, no how” statements regarding tax hikes, Assembly Republicans continue to negotiate with Assembly Democrats for an extension of the 2009 “temporary” tax hikes which are scheduled to “sunset” this coming July.

Meanwhile, over in the Senate, Majority Leader Steven Horsford, who needs to hold all of his Democrat senators while picking up the votes of three Republicans, obviously still sees a glimmer of light at the end of the tax hike tunnel.

Word on the street is that term-limited Sen. Dean Rhoads – who at the start of the session declared that tax hikes were necessary, only to retract that statement after pressure from constituents and a meeting with the governor – is reportedly now in discussions with officials of the teachers union to throw the governor and his Senate colleagues under the bus at the end of the session when push comes to shove on tax hikes.

And Sen. Joe Hardy – a moderate Republican who in his short time as a member of the Assembly managed to vote for the largest and third largest tax hikes in Nevada history – continues to chafe under the governor’s no-new-taxes budget and was said to have strongly resisted signing onto a letter of support backing Gov. Sandoval’s proposal earlier this session.

As the only remaining GOP assemblyman to have survived politically after voting for the Mother or All Tax Hikes in 2003, Hardy may believe he’s immune from electoral defeat for voting for tax hikes.

For his part, Sen. Ben Kieckhefer, another moderate Republican, owes his election last year to former Sen. Bill Raggio and a host of moderate GOP establishment figures from northern Nevada. If the money men pressure and twist the arm of the young freshman to vote for a tax increase over the objections of Gov. Sandoval, it’d be extremely tough for him not to dance with the ones who brung him.

And, alas, giving Horsford a little additional hope, Republican state Sen. Greg Brower opened the door ever so slightly in a Las Vegas Review-Journal story last week. The Reno senator was quoted as saying, “A budget proposal that includes revenue or tax increases, I don’t think gets two-thirds support right now, (my emphasis) and I don’t think would ever have two-thirds support.”

The key words, of course, are “right now.” That means possibly later. With later maybe being the end of the session. And the senator only “thinks” that such tax hikes are off the table, not “knows.”

Now, I don’t think Sen. Brower’s statement means that Sen. Brower himself is “going wobbly.” I think he means he knows that some in his caucus are wobbly. And as someone who still remembers vividly then-Assemblyman John Marvel selling out the “Lean 15” in the 2003 tax battle, I don’t take the no-new-taxes words of Rhoads, Hardy or Kieckhefer at face value.

Fool me once, shame on you; fool me twice, shame on me. Prepare thyself, GOP, for the Mother of All Sell-outs. And then let the primaries begin!!