Chance for Nevada teachers to get a raise is here

Union opt-out period is from July 1-15 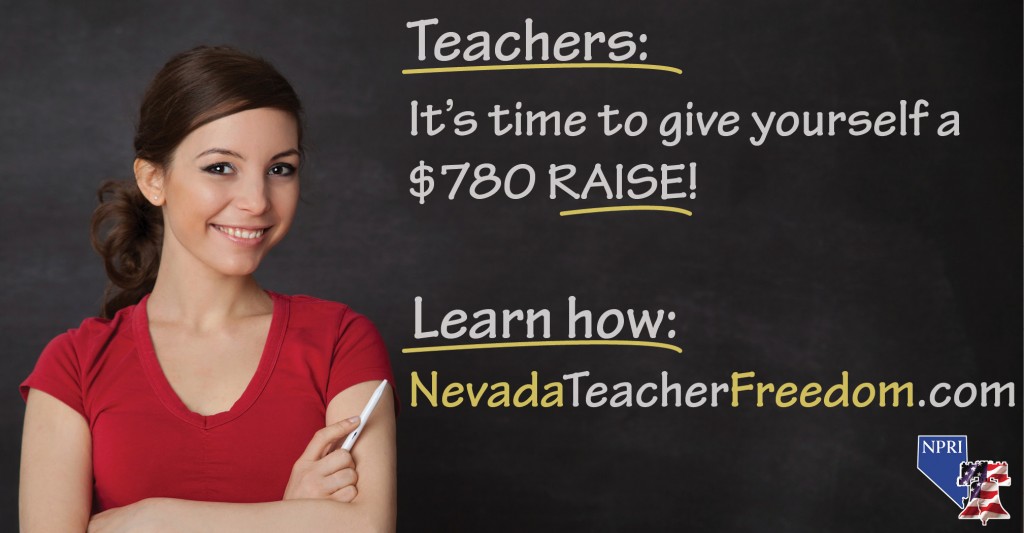 (Chantal Lovell of NPRI) – In a matter of weeks, Nevada teachers will get an opportunity that comes but once a year and is a secret to many of them.

From July 1 to July 15, teachers may take a step to increase their annual pay by hundreds of dollars a year and gain more freedom in their careers. The best part? It takes just moments for them to do this.

During that two-week window, Nevada’s public school educators may drop union membership. Though Nevada is a right-to-work state — meaning everyone has the right to work regardless of whether or not they choose to join a union — once a member of a local affiliate of the Nevada State Education Association, a teacher or support staff employee may only exit the union during that short, ill-timed window from July 1 to July 15.

School district contracts for teachers in Carson City and Elko, Douglas and Lincoln counties do not include an opt-out period, although one may be stated on the form teachers sign when they join the union. Teachers in the Mineral County School District enjoy the most freedom because they may exit at any time of the year.

Teachers and most support-staff employees, such as secretaries, librarians, nurses and other staff who ensure schools function, may drop union membership simply by providing written notice to their respective union from July 1 to July 15. To make it easier for employees to take control of their careers, generic opt-out letters are provided below.

* Letters must be sent to the school district and the union.
** School district did not provide yearly dues amount by publishing deadline.
*** Dues amounts from 2013

Despite claims by union bosses — who often receive sizable paychecks on the backs of those who’ve sacrificed higher-paying careers to educate children — teachers and staff who drop union membership still receive the same pay, benefits and treatment as those who continue to purchase membership.

Teachers who have dropped union membership in recent years cite many reasons for leaving. Some of the most common are:

Reason 1: Exiting the union saves a school-district employee hundreds of dollars a year.

How would you use the hundreds of dollars a year you’d save by leaving the union? A mortgage payment? A vacation with your family? Monthly massages to melt away the stress of teaching? Less worry about finances? New shoes and clothing for your children?

Employees who opt out believe they can spend their own money better than do the union bosses who funnel it into their own pockets.

The union tells teachers that if they join, they get a $1 million liability protection policy. Naturally, teachers like knowing they‘re financially protected from lawsuits from disgruntled parents.

What teachers often miss, however, is that even better insurance and benefits than CCEA offers are available from national, non-partisan professional educator associations. The Association of American Educators is one such organization. For only $16 a month, AAE provides each member a $2 million liability insurance policy, legal protection and supplementary insurance options.

Campaign finance reports show that the Nevada State Education Association plowed millions of dollars in members’ money into the failed November initiative to raise taxes in Nevada, which was defeated 4-to-1 by voters. The union is also donating members’ money to groups that advocate for controversial issues, like abortion expansion and same-sex marriage legalization. Union bosses also often brag about their ability to play politics in Carson City.

Yet, most workers in the school district — whether of the right or the left — aren’t involved in education because they enjoy politics. Many teachers just want to teach, and leave political pursuits to their personal lives, not their professional ones.

In 2011, the seven highest paid officials with the Nevada State Education Association had an average compensation of $174,354. This included three workers with the job title of “employee.” Those three “employees” took home an average of $171,606 in 2011.

At the local level, union-employee compensation is even more outlandish. Over a two-year period, one union boss pocketed over $1.1 million from the union and union-related organizations.

Teachers, administrators and support staff workers have only two weeks every year, from July 1 to 15, during which they can leave their unions. Please share this information with any school district employee and let them make the decision about union membership that’s best for them.