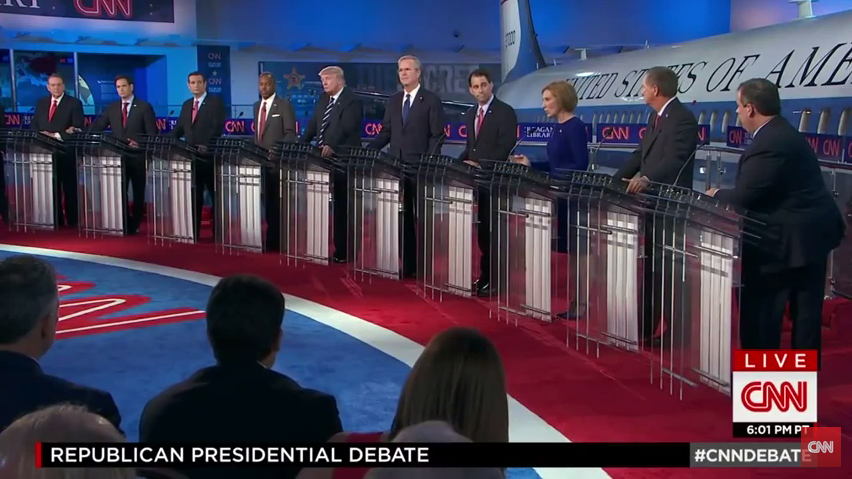 Structured like a giant mud-wrestling match, CNN moderator, Jake Tapper continually tried to play gotcha between GOP candidates with a clear goal of creating viral media clashes rather than allowing deep discussions of the issues facing our nation.

Fortunately, after the first hour or so, the eleven on stage seemed to grow in respect for one another and their answers showed that growing camaraderie.

The binding moment came during the intense discussion about the evil that is Planned Parenthood, and its dissection of live babies to sell their body parts.  The candidates didn’t choose to fall into the fight over tactics which Tapper tried to create, instead they uniformly stood up, denounced selling baby body parts as fetal tissue, and connected with each other in their adamant abhorrence at this practice.  In their mutual agreement on what is a foundational issue about the very character that defines America, the candidates agreed that their opponents were not on that stage, but were those zealots like Hillary Clinton who continue to justify and defend the indefensible.

From that moment on, the semi-circle became less of the circular firing squad of irreconcilable differences that CNN hoped it would be, and more of respectful discussion about the right approaches to issues.

Clash still occurred over the past, present and future Middle East policy, criminal justice issues, particularly as they related to the legalization of marijuana, and the right way to fix the tax system.  On stage, America saw very smart people grappling with the way to lead our nation out of the abyss.

If forced to choose, the two who stood out as the most impressive to me were Senator Ted Cruz and Carly Fiorina.

Cruz demonstrated a mastery of a number of issues, and I found myself wanting him to get into the mix on every question, because his answers were smart, well-reasoned and reflected the challenges facing our nation in a very real way.  Fiorina showed that she definitely belonged after her rise in the polls forced CNN to change their rules to allow her a place. She handled tough questions with a resolve, intellect and grace, and gave short, but comprehensive answers that rose above simple rhetoric.

There were some candidate stumbles as could be expected with the brilliant Dr. Ben Carson reiterating his support for tying the minimum wage to inflation — a stance that, if enacted, would throw the nation into a self-perpetuating inflation spiral.  Donald Trump took it on the chin when Fiorina turned his argument that Jeb Bush’s previously recanted line about taking $500 million out of women’s health care would haunt him, against The Donald reminding viewers of his damaging comments about her appearance.

But there truly were no candidates who were losers on the debate stage.  Rand Paul defended his positions on foreign policy and criminal justice reform impressively.  Marco Rubio’s self-possessed, confident rhetoric made me wish his short Senate career could be extended to see if he could make his actions match them.  Mike Huckabee made a stirring and compelling defense of religious freedom, and Jeb Bush showed himself to be a knowledgeable contender.  While never really shining, Scott Walker scored points by reminding viewers that he is the kind of tough, unwavering, principled leader who America needs with proven results from his state of Wisconsin.  And it was Walker who gave the strongest all-encompassing reply on how to change government policy to allow the private sector creation of good, high-paying jobs.

Unfortunately, the very breadth of the field, along with CNN’s determination to try to get the candidates to engage in a WWE-style royal rumble rather than a substantive discussion of the grave issues facing the nation got in the way.

But, imagine the envy Democrats must feel knowing that the GOP has sixteen smart, accomplished candidates all of whom are better than the geriatrics leading their field.

The end result was that regular CNN viewers got exposed to concepts that rarely cross their television screens.  They heard ardent discussions about the Constitution and the proper role of government.  They heard less gotcha and more honest discussion about the direction our nation should take.  They heard surprisingly little about the Democratic Party candidates, but a lot about how our nation needs to pursue a comprehensive economic growth strategy that entails the elimination of many of Obama’s regulatory anchors that are killing the middle class.

For more than two hours, CNN viewers heard the truth about the perils facing our nation, and hopefully had their eyes opened just a bit from the myopic view that dominates their programming.

The Republican candidates who almost en masse rose above the petty personal jabs that CNN tried to encourage and instead had an honest discussion about our nation’s future should leave America encouraged about the future of this race and our country.

America has big problems.  Rather than divide and splinter between varying approaches, the candidates on stage seemed to come to a mutual understanding that the differences between each of them paled in comparison to the stark contrasts between them and Obama’s government first solutions that have paralyzed our nation’s economic revival.  The various GOP candidate approaches to foreign policy unify around one common theme — Obama’s weakness has made the world a much more dangerous place.

It is likely that few will remember much from the Reagan Library debate itself, but if the seeming mutual respect gained on the stage holds, the effect on the campaign as a whole will be enormous.

NN&V StaffDecember 13, 2019
Read More
Scroll for more
Tap
GOP Debate: Fiorina’s breakout performance at Trump’s expense
Will the GOP establishment support Trump if he gets the nomination?
Skip to toolbar