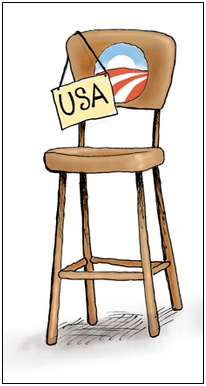 (Rick Manning, NetRightDaily.com) – America will witness the circus that is Congress throughout September, and likely draw exactly the wrong conclusion.

Congress is supposed to be messy.  It is designed to be a test of wills between competing ideologies.  It is when Congress asserts its constitutional powers that our nation is strongest and the people’s voices are heard.

Unfortunately, over the past six years, Congress has failed to fight to hold onto their constitutionally designed powers against an avaricious executive branch and an obsequious judicial one.  President Obama’s Iran deal is an opportunity for the Senate to turn this recent history on its head simply by asserting its Article II, Section 2 authority, and voting on the deal as the treaty it is.  President Obama won’t like it, but should he try to implement the treaty without ratification, the Senate should be ready to sue, and force the issue into the courts.

The idea is simple, force the federal courts to make a decision on whether the treaty power of the U.S. Constitution can be ignored by the executive branch simply because it is inconvenient to them.

On the budget front, Congress will be deciding how much will be spent on every discretionary program in the United States budget in September.

The focus will likely be heavily tilted toward the decision on whether the U.S. taxpayer should be funding Planned Parenthood’s abhorrent practice of cutting the organs out of viable babies and selling them to researchers.

This budget will fund 80 percent of the remainder of Obama’s term in office.  Based upon the President’s pen and phone approach to his power, it is reasonable to assume that this President won’t decide as President George W. Bush did, to shut down the regulatory process in the last six months of his term out of concern for being accused of publishing “midnight regulations.”

Congress’ decisions on what they choose to fund, and what specifically to not fund, will have a material impact on whether Obama will be able to continue on his regulatory jihad against the free enterprise system.

A simple example is the choice Congress made to defund Obama’s proposed transfer of control of certain Internet functions from the United States to a multi-national stakeholder body.  Wisely, Congress listened to U.S. Rep. Sean Duffy (R-Wis.), Sen. Ted Cruz (R-Texas) and others and ended funding for the giveaway, and they should do so again for the upcoming year.

Stopping the implementation of a laundry list of Obama regulations should be a no-brainer through the process of finalizing a continuing resolution.

A few obvious defund targets are stopping the implementation of Obama’s errantly named Clean Power regulation, ending funding for the EPA’s sue and settle scam that is used to create law while funding the environmental left, and putting the kibosh on implementation of the National Labor Relation’s Board recent decision destroying the franchise business model to benefit big labor benefactors.

But there are many, many other issues big and small that Congress should weigh in on.

HUD’s recent implementation of rules that put into place the structure to override local zoning ordinances to further the placement of low-income multi-unit housing in areas currently zoned for single family as part of green zoning begs for defunding, and the House of Representatives, due to the efforts of U.S. Rep. Paul Gosar (Ariz.), have already passed legislation doing just that.

These few examples of rogue, destructive regulations and myriad more deserve Congress’ attention through an aggressive use of their power of the purse authority.

Obama has only fifteen months remaining in the White House, and stopping implementation of some of his most harmful measures by refusing to fund their implementation is the best, and only, response to a President who proceeds as if he is the sole branch of government.

For America to work again, Congress has to work the way it was intended, and that means reasserting their prerogatives.  Whether that be through insisting that the treaty ratification process be followed, or by setting the nation’s spending priorities in very specific ways to stop Obama’s executive overreach, the next three weeks will be instrumental in determining if the leaders of the legislative branch will fight to swing the balance of power back toward the vision upon which our nation was founded.

Stay tuned, while the “fights” in Congress may seem like spinning wheels, in the end, they have real meaning for post-Obama America.

The Center SquareJanuary 27, 2020
Read More
Scroll for more
Tap
The most powerful office in the world is NOT the President of the United States!
29 States lose Obamacare enrollees
Skip to toolbar