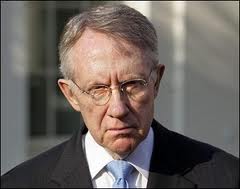 (David Mansdoerfer) – Today, after reading Senator Reid’s debt ‘plan’, I burst into hysterical laughter. Initially, or as the media would like us to think, it looked like Sen. Reid’s ‘plan’ would bridge the gap between House Republicans, Senate Democrats and President Obama. However, in Reid’s ‘plan’ to magically reduce the deficit by $2.7 trillion, there is little in the way of actual new savings.

Let’s take a look at how Senator Reid plans to magically reduce the deficit by $2.7 trillion.

2. $100 billion in mandatory savings: Again, using the already agreed upon format of the negotiations between Vice President Biden and Congress, these cuts will focus on higher education finance, agriculture, and reforming Fannie Mae and Freddie Mac. (Where have we heard this before? Haven’t we been trying to reform Fannie/Freddie for the last two decades?)

3. $1 trillion in savings from the Iraq/Afghanistan troop withdrawal: Easily my favorite part, this section banks on the already in place troop withdrawal from Iraq and Afghanistan. (While it is nice to forecast savings from already agreed upon plans, to include them as new savings in the debt ceiling deal is ridiculous. There is absolutely nothing new about this $1 trillion in savings.)

4. $400 billion in interest savings: In another brilliant manipulation of numbers, this area of ‘new’ savings includes the money we will save on interest from the discretionary cuts and troop withdrawal listed above. (To be completely honest, Republicans also used this number in the Paul Ryan budget and Cut, Cap, and Balance. However, as you will see later in the article, both of the Republican plans came with well-substantiated ideas to create long-term savings and cut to the heart of the spending problem. Reid’s plan – not so much.)

5. Establishes Joint Congressional Committee to Find Future Savings: A bi-partisan committee that will continue to look for ways to reduce the deficit. (Hmmmm… I wonder if their recommendations will include cutting fraud and waste, and eliminating duplicative programs. Political code words for I’m not going to risk my seat by actually making substantial reforms.)

Now that we have delved into the heart of Senator Reid’s plan; have you noticed anything missing? If you guessed reforms to mandatory spending programs, also known as entitlement programs, you would be correct.

Senator Reid’s plan conveniently leaves true spending cuts off of the table. Instead, by throwing around forecasted interest savings, Reid has positioned himself perfectly to look like the last second savior of the budget crisis. The only problem with this, however, is that his plan is nothing more than fancy accounting.

Senator Reid’s plan has done little more than marginalize all of the negotiations so far by cherry-picking the shallowest ideas. True reforms and savings are going to come via the debate over entitlement reform. By leaving these out of his plan, Senator Reid has failed the people of the United States and especially those who elected him.