Heller: President Has Damaged The Economy 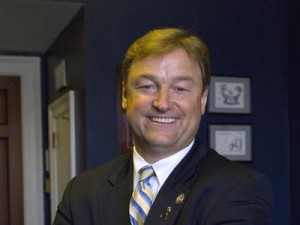 (Lori Piotrowski) – “Let me start on a positive note—my wife and I will become grandparents for the first time in October!” So began Senator Dean Heller’s address to the Spring Mountain Republican Women’s Club on Thursday, July 25.

“But let me ask you about the quality of life you enjoy today. Think of your parents and your grandparents—is it better than what they had?”

“Yes,” Heller continued, “for most Nevadans that is true. Now, will the quality of life of your children and your grandchildren be better than today?”

“That’s the response I get all across Nevada. For the first time in history, we will leave our children a quality of life worse than what we experienced.”

“Do you remember when he said nobody should go to Las Vegas? Well, we might forgive him saying that once. But then he said it again, and it wasn’t a mistake. By the third time he said it, you knew he meant it with purpose,” he said.

Las Vegas lost some 50,000 room nights in hotels the first two weeks after the first comment. “I’m amazed more hasn’t been said about that in the media.”

After the vote, Heller said he explained his vote to the press: “The stock market will tell us whether it’s a good deal or a bad deal.” And what happened, he asked? “The market lost 1,000 points after the deal.”

The primary reason to vote against the bill, Heller continued, was because “we have left taxation and spending up to a gang of 12, and I believe that’s wrong.”

He took a few moments to jab his senate race opponent, Congresswoman Shelley Berkley. “Berkley says she’ against it, but she voted for it! How can you vote for it and then run around the state saying you’re against it?”

“Berkley voted for the rationing element in the health care bill three times, and now she’s against it?”

“I’m just looking for a little truth in journalism,” he said.

“We need to bring everyone back to Washington. We should get the president off the golf course and get him to solving problems.”

“We haven’t passed a budget in two-and-a-half years, and in September, we’re going to have to pass another continuing resolution because the new budget year begins the first of October. So all those arguments we just had, the ones that almost closed down the government, are about to begin all over again.”

He continued, “We haven’t passed a budget, and we won’t pass a budget as long as Obama is president. We are working without a five-year, a ten-year plan. How is business going to hire anyone if they don’t know what the tax rate will be?

Heller spoke about some legislation he will be proposing on September 30 if Congress hasn’t passed a budget. SB 1442—No Budget, No Pay—is a simple piece of legislation. Essentially, Heller said, “If congress can’t do its job, and this is its most basic job, Congress shouldn’t get paid until a budget is passed.”

He expects push back on this bill.

As he opened the floor to questions, a woman asked about the immigration issue. Heller said that Obama will get push back from the House and Senate about the recent memo to ICE selective deportation be implemented.

With regard to the tax code, Heller explained that when Reagan took office, the tax code was 300 pages. It is now over 30,000 because of the number of loopholes. “I’d like to get it back to 300 pages. Tax commissioners in D.C. can’t get their taxes right because they don’t’ know the code. Clearly, the code must change.”

What is an appropriate response to liberals who claim the Republicans want to cut off Social Security and Medicare to seniors, one woman asked?

“For succeeding generations, Social Security needs to be fixed. It will take work to preserve it. It will go bankrupt in 10 years if we don’t fix it.”

“Social Security and Medicare are political weapons. Anyone who wants to save the system and presents a change is criticized by the other side. The left is willing to bankrupt the system to take control of a larger group of people.”

Heller continued, “Obama cut half a trillion dollars in Medicare and then with the proposed debt ceiling vote, cut another 2%. People are hurting, the systems are hurting.”

“Meanwhile, people understand that you can’t preserve the system as it is. It can be fixed, but there are those who worry more about getting reelected than protecting the social network of our country,” he explained.

A final question asked whether the senator thought the president had done anything right, which brought about plenty of chuckles from the audience.

“Obama did inherit a bad economy—I believe that. But everything he has done has made it worse. Reagan inherited a bad economy from Carter, but he turned it around in 22 months. And he had a Democratic House and a Democratic Senate. Obama had it all, and he couldn’t do anything.”

As he wrapped up his time, Heller encouraged the attendees to help turn out the vote. “You may see change in the presidency, and a change in leadership in the Senate and in the House. For the first time, all three leadership positions could change because people are upset with the whole system.”